Over the past couple of months, since the posting of my article Gold Charts – $1450 the price of gold has done nothing to indicate a change in direction or reversal of any consequence. 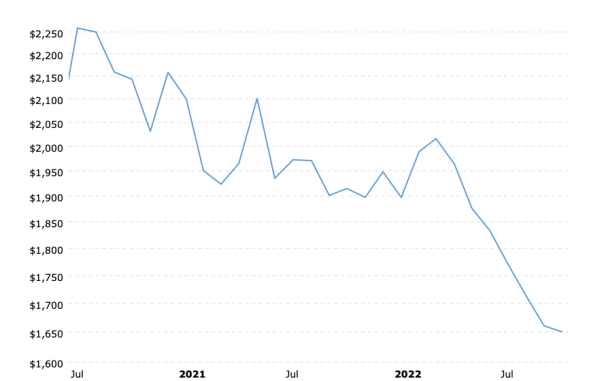 The magnitude of the decline in gold’s price is evident. The actual numbers may seem startling to some. The current gold price of $1650 oz. is six hundred dollars per ounce less than its peak price of $2250 in July 2020.

Below is a second chart which covers the past five years… 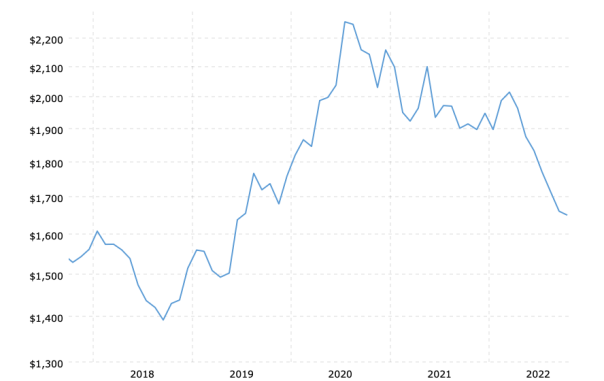 It does not show on the chart, but the the recent intraday low of $1618 approached the outside boundaries of the zone $1400-1600 (current inflation-adjusted dollars) where gold traded for six years between 2013-2019.

As we pointed out in the article Gold Charts – $1450, that area could bring some stabilization to the current decline. Here is a chart of gold prices for the past ten years and includes lines drawn to highlight the potential zone of support… 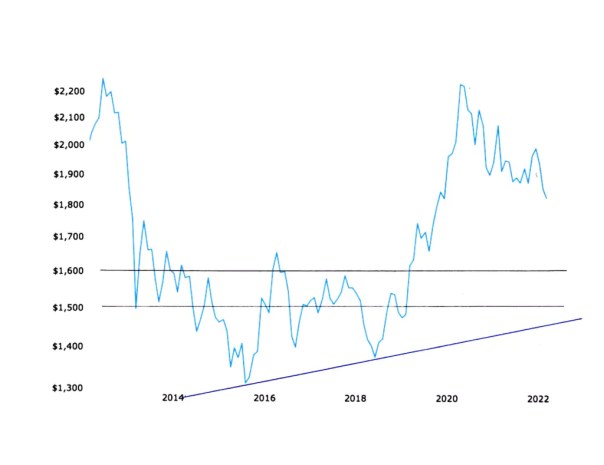 Regarding the uptrend line drawn on the chart which dates back to the low in late 2015, I said this…

“Also in this final chart is a longer line of support dating back to the primary low point in December 2015. Near term, the gold price could drop as low as $1450 oz. without breaking that uptrend line.”

HOW LOW CAN GOLD GO?

In looking at possible downside targets one cannot rule out a return to $1000 oz., at least initially. That is where the post-2011 decline ended in December 2015 and the move to new highs began.

Technically speaking, however, there is virtually no support below the zone of $1400 – 1600 oz. Here is our final chart showing inflation-adjusted gold prices for the past fifty years… 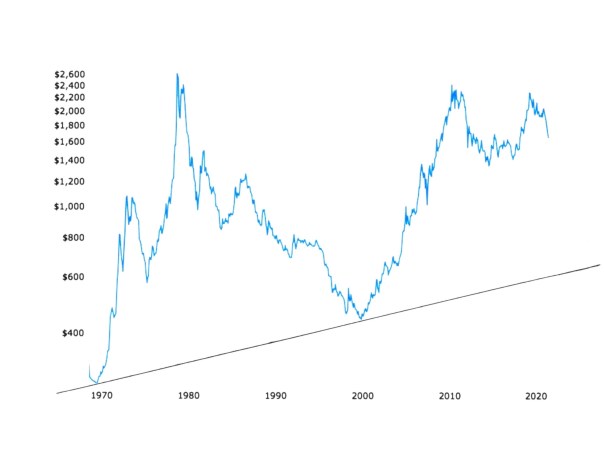 The chart above shows an uptrend line dating back to January 1970. That uptrend line intersects at $600 oz. within the next six to twelve months.

If we experience a multi-year decline similar to that which happened after previous peaks, then gold could still decline to somewhere close to $800 oz. several years from now.

GOLD PRICE IS ALL ABOUT THE US DOLLAR

The price of gold tells us nothing about gold. A long-term higher gold price over time is a reflection of the actual loss in purchasing power of the U.S. dollar that has already occurred.

As recently as August 2020, the gold price reflected a ninety-nine percent decline in the purchasing power of the U.S. dollar when it peaked at $2058 oz.

If you are expecting gold to suddenly turn around and move to new highs, then, by definition, you are betting on a sudden and protracted decline in U.S. dollar strength.

Problem is, gold is notoriously slow at reflecting and catching up to existing levels of inflation.

Earlier this year, the gold price peaked on a secondary basis at $2043 oz., confirming the ninety-nine percent decline in U.S. dollar purchasing power that we mentioned earlier.

What I said then is just as valid and important now; especially if you have expectations for higher gold prices…

“We have heard much lately from those who claim that gold could easily rise to $3000 oz. or more; maybe even $10,000 oz. Some say it could happen quickly, too.

Those prices are possible, of course; but likely not quickly or easily. That is because gold – at $2000 oz. – already represents fully a ninety-nine percent decline in the purchasing power of the US dollar.

In order for gold to rise beyond $2000 oz., and stay above that number or increase to a higher level, there would need to be further significant declines in US dollar purchasing power that are apparent and permanent. (Gold At $2000 or $600? – No Difference)

Stop looking to gold for the answers. The only thing you need to know about where the gold price is headed is what the U.S. dollar is doing.

Right now, the U.S. dollar is strong. As long as that strength continues, the price of gold will not go to new highs.