19 hours ago
The Euro in Huge TROUBLE | Will Gold & Silver See Their Day? - Peter Krauth
2 days 6 hours ago
GoldSeek Radio -- Bill Murphy: After 12 years of frenzy, modern investors are blissfully unaware...
2 days 22 hours ago
Housing Crash Around The Corner? When Will Gold & Silver Take Off? - Adam Taggart & Economic Ninja
4 days 20 hours ago
COT Silver Report - September 23, 2022
5 days 8 hours ago
Silver From Comex Depleting! Where is The Silver Going? 🚨 - Ed Steer

As Joe Biden’s presidency descends into free-fall with voters, the economy may be on the verge of collapsing in similar fashion.

All presidents make mistakes, whether it’s failing to limit the growth of the federal budget or being unable to anticipate turns in the economic cycle.

But the Biden administration has been unique in consistently getting just about everything wrong while stubbornly refusing to change course.

“My message to the companies running gas stations and setting prices at the pump is simple: this is a time of war and global peril. Bring down the price you are charging at the pump to reflect the cost you’re paying for the product. And do it now.”

“Working on it Mr. President. In the meantime -- have a Happy 4th and please make sure the WH intern who posted this tweet registers for Econ 101 for the fall semester..."

The idea that fuel prices fluctuate because of the small spread charged by gas stations is absurd. It would be like blaming bullion dealers for the market price of ordinary gold coins, such as Krugerrands. 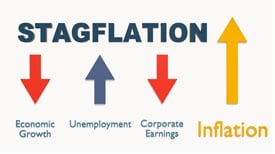 In both industries, profit margins are razor thin.

And they don’t necessarily improve along with rising spot prices for the raw commodity – over which retailers have no control.

The fact that Joe Biden and his handlers seem to not grasp basic principles from Economics 101 has alarmed Amazon founder Jeff Bezos. The liberal billionaire recently turned on Biden, blasting the administration for fomenting inflation and evading responsibility.

His latest barb, in response to the Biden tweet blaming gas stations:

“Ouch. Inflation is far too important a problem for the White House to keep making statements like this. It’s either straight ahead misdirection or a deep misunderstanding of basic market dynamics.”

The White House seems to not even understand political dynamics. When former President Bill Clinton got into a political rut early in his first term, he pivoted toward the center and embraced fiscal restraint (with the help of Republicans in Congress).

But Joe Biden just keeps digging his political hole – and the national debt – deeper into the abyss.

The administration’s inflation fiasco is leading directly into a recession fiasco. Biden, his Treasury Secretary, and the Federal Reserve chairman had assured us inflation would be transitory. More recently, they claimed a recession is “unlikely.” And now they say a recession is “not inevitable.”

Can anyone take them seriously anymore at home or on the world stage?

They said sanctions on Russia would deter Vladimir Putin from invading Ukraine. They argued that sanctioning the central bank of Russia would cause the ruble to collapse.

Instead, Russia has proceeded to wage war and see its currency gain value.

The Biden administration recently banned the importation of Russian gold. This policy can be expected to fail as well.

Gold being a fungible asset and global markets for it being liquid and deep, there will be plenty of buyers of Russian gold in India, China, and elsewhere who aren’t the least bit concerned about U.S. sanctions.

And if Russia’s central bank decides to add more tons of the country’s gold mining output to its vaults, the ruble can be expected to strengthen even further.

Unfortunately, the U.S. economy cannot be expected to strengthen in this environment. Investors who are seeking growth opportunities may have to consider alternatives that hold up well during stagflation – such as gold and silver.