In a development which the participants understood the importance of then, but which the wider financial markets may understand the importance of going forward, on 29 June 2021 the Shanghai Gold Exchange (SGE) hosted a China-Russia Precious Metals Webinar with Russia’s de facto precious metals authority the “Self-Regulatory Organisation ‘National Financial Association’” (SRO NFA).

Referred to by the SGE in typically long-winded fashion as the “Friendly Cooperation and Share the Opportunities – China-Russia Precious Metal Market Webinar”, the event, said the SGE, successfully promoted “the win-win development of the precious metal markets in China and Russia”. 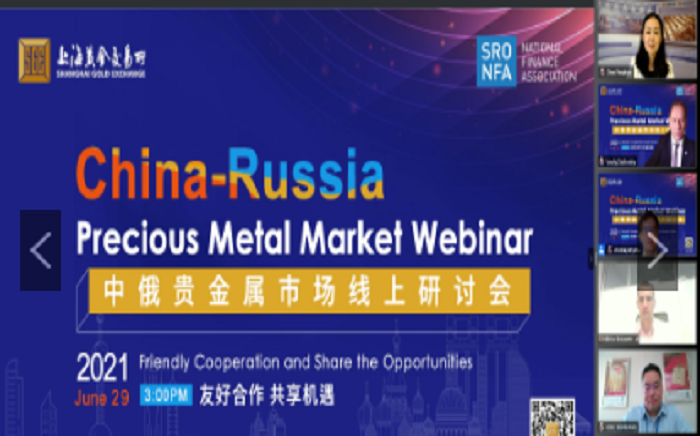 For those who have not heard of Russia’s SRO NFA, the NFA is a professional body which literally represents the entire Russian financial sector from banks to investment houses to securities trading companies. According to its website, the NFA:

“Currently, it [the NFA] includes about 300 Russian securities market participants from 28 regions from 9 Federal districts in Russia. Their operations make up more than 80% of the Russian financial market.”

In its press release, the Shanghai Gold Exchange said that the Sino-Russian webinar was “the first cooperation project between SGE and SRO NFA since the signing of an MOU in 2020”.

The MOU that the SGE is referring to here is the Memorandum of Understanding (MOU) signed by the Shanghai Gold Exchange and Russia’s NFA at a ceremony on 24 November 2020. For more details about the MOU signing see here. Prior to the MOU signing in 2018, the NFA and SGE agreed to begin cooperating. See details here. 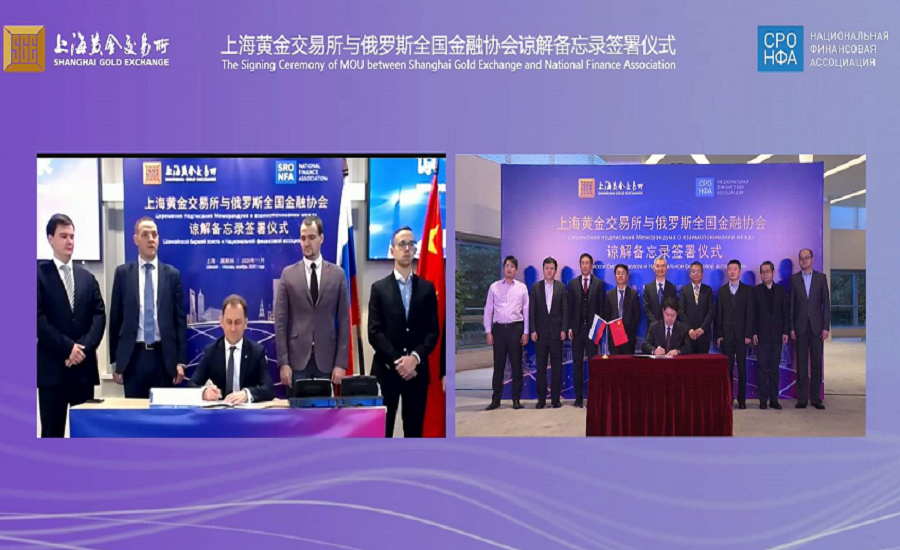 At the 2020 MOU signing, which was attended by the SGE President, Wang Zhenying, and the Bank of Russia’s Director of the International Cooperation Department, and Andrey Lipin, Zhenying of the SGE said that following the signing of the MOU, the SGE and SRO NFA would “strive to explore and complete the new field of Sino-Russian gold market cooperation, in addition to promote the connection and development of both markets”

Russia’s Lipin said that the Bank of Russia would “support cooperation and accelerate the complementary development between the Chinese and Russia gold markets”.

Fast forward to the SGE’s June 2021 webinar, and the SGE reiterated there that:

“in the future, both parties will continue to work to establish a communication platform for investors in both countries, to promote a win-win situation through cooperation and the healthy development of the two countries’ gold markets.”

If those intentions looked noteworthy back then in late 2020 and mid 2021, imagine what they might mean now in light of the current massive sets of weaponised sanctions against Russia, and China’s willingness to take Russia’s side.

The November 2020 MOU ceremony was also attended by the chairman of Russia’s NFA, Vasily Zablotsky, who at the event promised that the National Financial Association would “play the role of market organizer” to “facilitate Russian institutions to access China’s gold market”.

What could Zablotsky have meant by that? 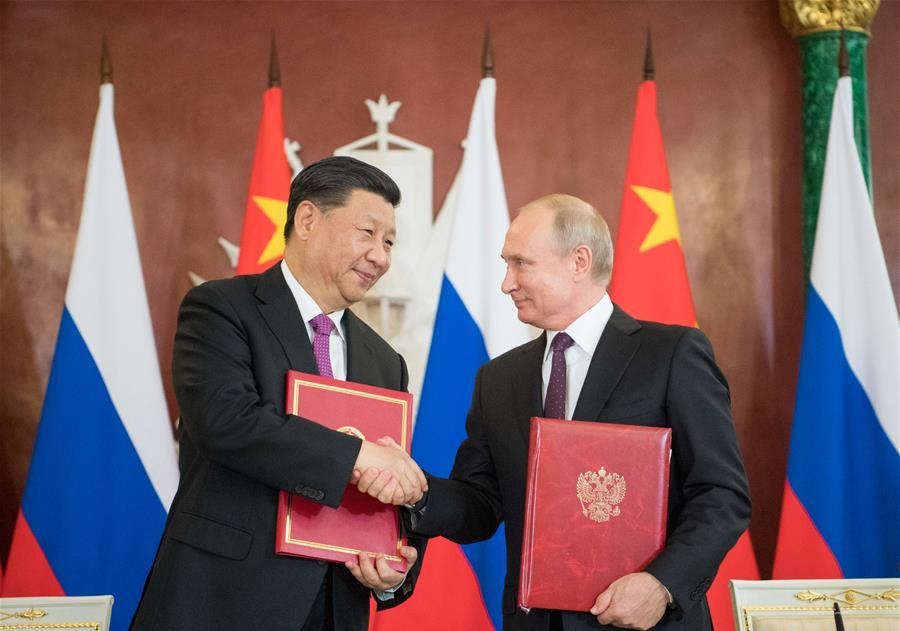 Let’s look at which Russian entities are members of the Shanghai Gold Exchange (International Board). Looking at the international members list, we see that there are four Russian entities featured,  three of which are the heavyweight Russian banks central to the Russian gold market, in the form of VTB, Sberbank and Bank Otkritie, and the fourth which is the SFO National Financial Association itself.

Hmmm. Aren’t these 3 Russian banks all now sanctioned by the US-UK-EU, with sanctions targeting these banks all across the US and Europe as well as in the London gold market (where VTB and Otkritie were kicked out of the LBMA)? Yes they are. But not in China, since as you can see, China isn’t playing the US-EU-UK sanctions games.

And there’s that name again, Russia’s SFO NFA, a name which seems to constantly crop up at the core of this blossoming Sino-Russian gold market cooperation.

If you still haven’t heard of the SFO NFA, maybe you have heard of  the annual international “Russian Bullion Market” forum which is organised each year by the SFO NFA, and which last took place on 18 November 2021 in Moscow, Interestingly, some of the big Russian banks such as VTB and Sberbank also sponsor that forum.

Also notably, the World Gold Council (WGC) was also a sponsor of the SFO NFA’s Russian Bullion Market conference in 2021 and in 2020 – See the WGC’s dedicated Russian gold website ‘GoldinRussia.ru’ for details. One wonders however whether the WGC will be so eager to repeat its sponsorship for the 2022 forum in Moscow. Methinks probably not.

A Who’s Who of Russian Banks

Importantly, Russia’s National Financial Association (NFA)  also has a dedicated Precious Metals Market Committee. And its membership list reads like a who’s who of all the big players in Russia’s gold market from the banks and the Russian government.

Let’s take a look. The chairman of the NFA’s precious metals market committee is Cherny Yury Vitalievich of Gazprombank. Other members of the precious metals market committee include representatives from VTB Bank, Sovcombank, Sberbank, Gazprombank, Metcom Bank, Lanta-Bank, Bank Uralsib, Promsvyazbank, Asia-Pacific Bank, and Rosselkhozbank, as well as the representatives from the Moscow Exchange, the SRO NFA, and the Russian Association of Precious Metals Market Participants.

Russian government entities are also represented on the NFA’s precious metals market committee in the form of Alexandrovna Goncharenko Yulia who is Head of the Precious Metals Department at the Ministry of Finance of Russia, Ministry of Finance of Russia, Alexey Vadimovich Lyashchenko who is a member of the Committee on Financial Markets at State Duma of the Russian Federation, and Larisa Konstantinovna Selyutina who is Director of the Financial Market Infrastructure Department at the Bank of Russia.

If you are wondering why Russia’s Ministry of Finance is heavily involved in Russia’s precious metals market, a part of the reason is that the Ministry of Finance controls the Russian State Fund of Precious Metals and Precious Stones (which can own monetary gold), with the Fund being administered by The Gokhran.

So this is the Russian group that will “play the role of market organizer” to “facilitate Russian institutions to access China’s gold market”, and in the words the Bank of Russia “accelerate the complementary development between the Chinese and Russia gold markets”.

Meanwhile, back in the US, the US senators looking to ‘freeze Russian gold’ don’t seem to have grasped how out of touch they are with these rapidly developing Sino-Russian gold market developments through the SFA – SGE cooperation. Foothills of the Himalayas malarkey this is not. With their gold market collaboration, the Russians and the Chinese appear to be aiming for the Summit.