September 25, 2022 Gold Miners Watch the "Last Inflated Man Standing" Startto Fail
September 18, 2022 The Purple Pill
September 11, 2022 The “Best of Times” for Gold (and the Miners That Leverage It)
August 28, 2022 Stock Market Assigns More Power to the Fed Than Gold Bugs Do
August 12, 2022 Gold Is About Value; The Miners Are a Speculation Upon 'Value'

Commodities: Bounce or Something More?

Commodities have been corrected hard, generally to support

It is amazing how compressed the cycles are in the markets these days. But maybe it’s not so surprising when you consider the constant involvement of meddling, manipulating central banks and even governments. Add a dash of hysterical media and the human instinct for knee-jerk herding and voila, there you have it; sentiment in commodities (and the inflation trades in general) going from absolutely rock solid (over) bullish to bleak in the span of a month.

All of this in the wake of an entity that held out dovish as long as it could before being directed by the market to put on its hawk costume and go steroidal in its inflation fighting stance. Seriously, market participants are taking their cues from a monetary authority that itself is taking cues from the bond market’s signaling (tardy though they were on the uptake). The link above shows the 3 month T-bill yield’s directive that the Fed aggressively raise rates back back in February. There were other signals as well demanding the same.

Fast forward to today, I covered my short position on DBC on Wednesday (July 6) and also did some buying of commodity related items on that day after making an initial entry back into the space last week, adding NatGas. In this June 18 interview with Jordan of the Daily Gold, I made references to Energy as the “last inflated man standing” with respect to gold mining fundamentals (a discussion beyond the scope of this article). But it was also the last inflated man standing in the way of a comprehensive and thorough correction of the inflation trades. Well, that man finally cracked and so here we are with many commodities and related equities at support levels that buyers would have dreamed about back in the spring.

DBC short was covered just above the uptrending 200 day moving average. This CRB tracker is oversold and due for a bounce. 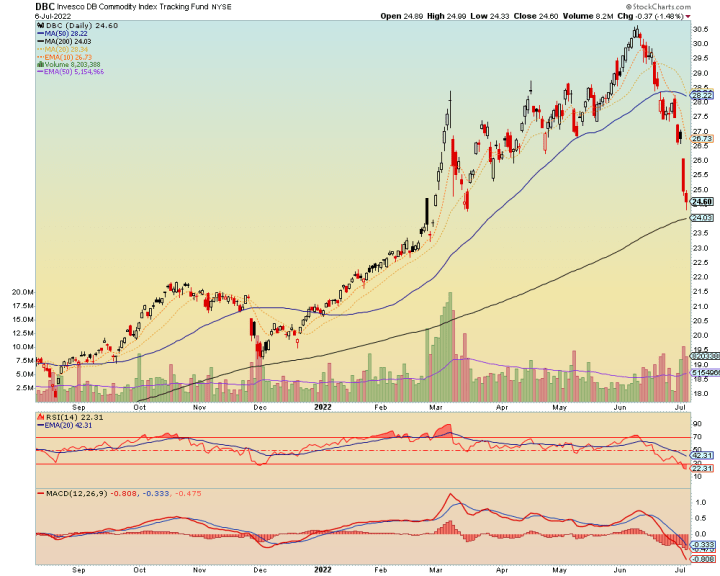 NatGas is shown here grappling with the daily SMA 200 and the first lateral support level after an epic decline from the highs. 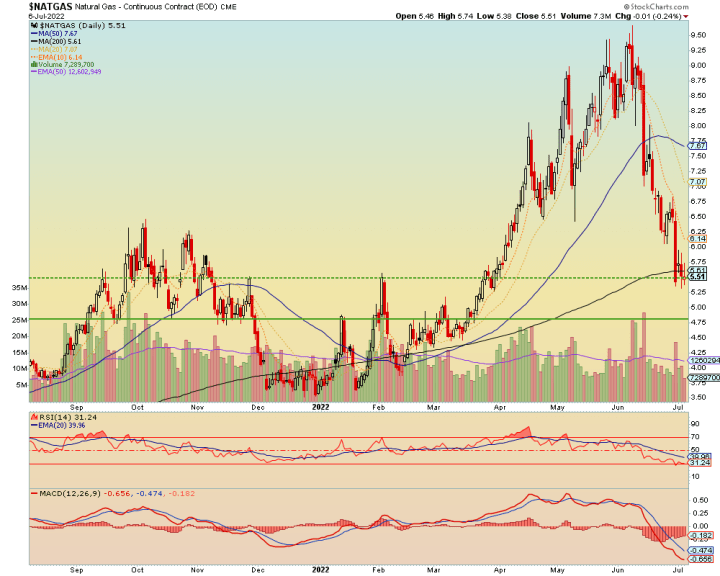 WTI Crude Oil finally got cracked toward its uptrending SMA 200 and initial lateral support. Better support is at 85. 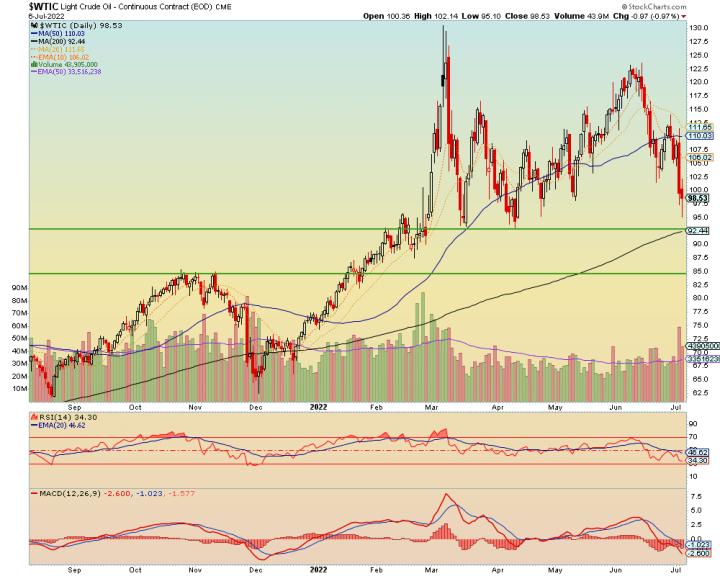 Agricultural commodities have been absolutely bombed. While the seasonal averages of several Ags do not tend to bottom until September, one in particular bottoms now (on 30yr average) and was added per an NFTRH+ update on Wednesday. Also, a ‘fert’ stock was added after a similar decline from the hysterical peak in the spring. Question for commodity bulls: If you were lusting after this stuff 600 why not now at an oversold 441? The Fed? The hawking Fed? The Fed that only started hawking after the bond market hawked them? 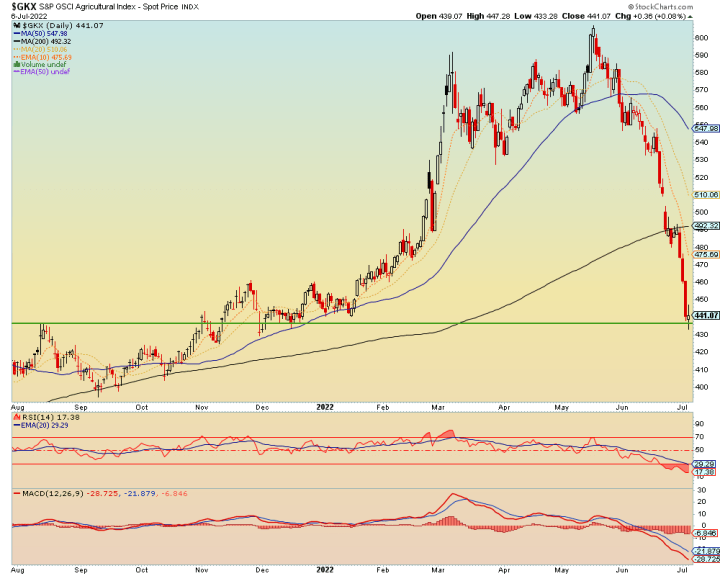 The Industrial Metals complex blew off amid the Russia/Ukraine war and the supply issues it prompted. Since then it’s been ignominy for this inflation trade as the global economy threatens to swing counter-cyclical amid fading inflation signals. The best that can be said is that GYX is broken but oversold. A bounce can come at any time. 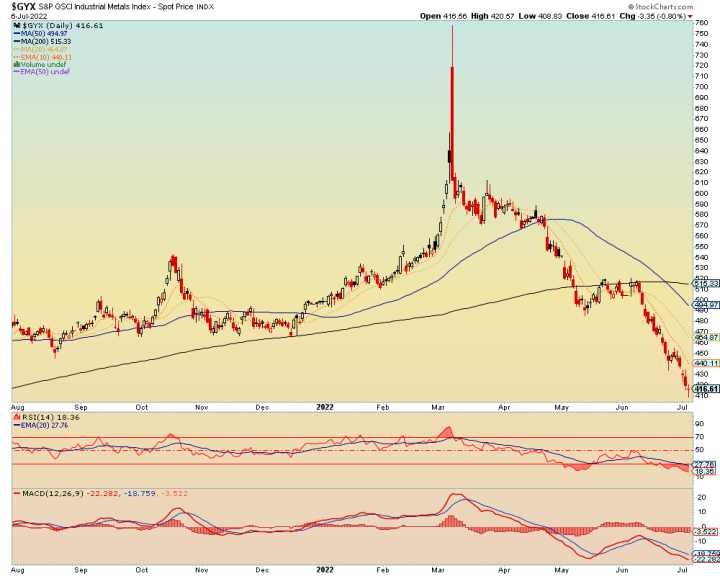 Finally, a look at the ‘inflation expectations’ tracker, RINF. Oh yes, the inflation story has been hammered right into the oncoming FOMC meeting (July 27) and its nearly in the bag .75% rate hike prospect (per CME traders as of 7.7.22). 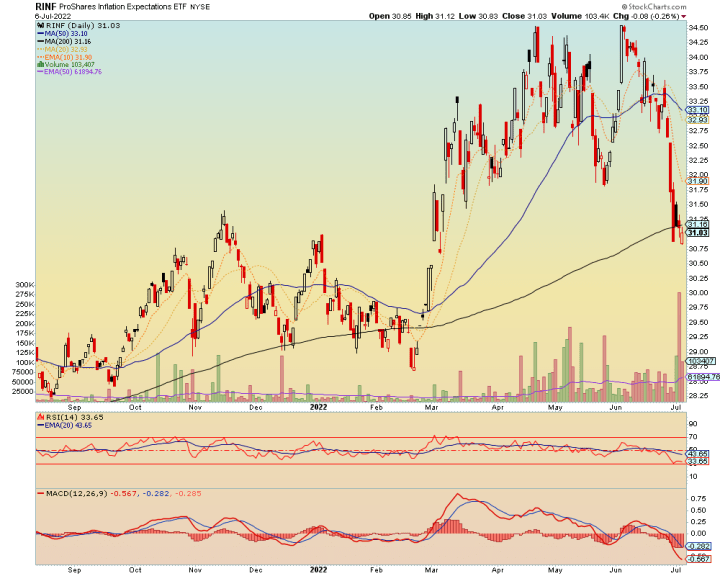 All bow before the great and powerful Oz. Or just pull aside his curtain and marvel in how pathetic and ineffective he actually is. If commodities call his bluff… ?

The commodity complex earned the right to take a hard correction to test the very souls of inflation traders. In becoming deeply oversold and in most cases at clear support, it is time for a bounce. After having gotten the heck out of the way on the early signals of the failure in the inflation trades I, and therefore NFTRH have retaken some positions.

For safety’s sake and until the signals clear post-July FOMC, it is probably best to view the potential as oversold ‘bounce only’. But if the inflation problem regenerates right in the face of the hawking Fed – or if declining inflation signals and a decelerating economy pressure the Fed to issue some sweet (dovish) nothings to the market later this month – we could be looking at something more persistent.

For now I am just going with the currents of the market and of course, the charts. With the ‘last inflated man standing’, Energy, having finally cracked the setup is for an oversold bounce at least. If/as this proves out NFTRH will continue to illustrate trade ideas in alignment with the situation, whether for said bounce or something more.