Cryptocurrency markets were rattled this week by the abrupt collapse of FTX, a major exchange. 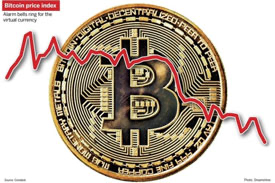 But after some investigation of FTX's finances, Binance concluded, “the issues are beyond our control or ability to help.”

The “issues” reportedly include widespread misappropriation of funds in client accounts.

FTX had specifically touted itself as a safe and secure platform. It turns out, FTX may have just been playing a confidence game in an industry rife with con artists who lure in suckers with promises of digital riches that are ultimately based on nothing.

Is a Great Reckoning Coming in Crypto Markets?

In the fallout from FTX's collapse, Bitcoin prices plunged to a two-year low. The leading cryptocurrency is now down 75% from its all-time high.

Bitcoin promoters insist that with blood in the streets, now is a great buying opportunity.

Detractors argue the reckoning in crypto markets is far from over. They say most digital tokens are intrinsically worthless and that confidence, now rapidly eroding, is the only tenuous thing that gives Bitcoin market value.

Of course, Bitcoin has the proven potential to generate explosive moves on the upside. But whether its next big move is to double in price or get cut in half is purely a matter of speculation.

Crypto markets have tended to show a strong correlation to the stock market (the technology sector in particular), but with amplified volatility.

Cryptos have shown less of a correlation with currency and precious metals markets. Even as Bitcoin plunged 25% this week, gold prices gained 2%.

Bitcoin Is Not Digital Gold

Whatever the merits of speculating on or “hodling” Bitcoin, it is no substitute for hard money. “Digital gold” Bitcoin is not!

The yellow metal has largely avoided the volatile selling seen in cryptos and equities at times over the last several months.

Although gold prices remain range bound, they have recently started rallying off their lows, breaking above the $1,700/oz level this week. Silver has rallied more strongly, potentially signaling strength to come for gold.

The collapse of FTX could be the canary in the coal mine warning of broader risks on not only crypto exchanges, but futures exchanges, stock exchanges, and the banking system itself.

The aggressive pace of interest rate hikes by the Federal Reserve and the resulting volatility in debt and equity markets could soon raise liquidity “issues” in and major financial institutions. Any highly leveraged large firm that fails to prepare adequately for rising risk factors could run into trouble suddenly and without warning.

During the financial crisis of 2008, some precious metals investors lost the holdings they entrusted to the financial firm MF Global after it suffered catastrophic losses on risky investments.

Hold Your Metals Personally or in a Non-Bank Depository

The lesson is that – if you don’t want to store your gold and silver personally – core holdings should not be deposited at financial institutions or held without a formal storage agreement, i.e. a “bailment” arrangement.

When considering storage options, make sure you have direct title to your coins and bars and that they are insured within a highly secure facility that is independent of the banking and brokerage systems, such as Money Metals Depository.

There’s nothing wrong with speculating on cryptocurrencies, penny stocks, or futures with money you can afford to lose if you are so inclined.

It is difficult to avoid counterparty risk with cryptocurrencies if you intend to trade them. It is impossible to predict whether they will appreciate with inflation over time considering the brief and volatile history of the asset class.

Bitcoin cannot be seen or touched in the physical world and cannot be used for barter or exchange without an internet connection.

In the event of an economic crisis or U.S. dollar collapse, which would more reliably retain value: A gold bar and a handful of silver or coins or a Bitcoin along with a smattering of Dogecoin held on some exchange in the digital ether?

The answer is that when hard realities set in, real wealth trumps digital wealth.

If you are looking for an asset class that has stood the test of time, been used by kings and governments to protect their wealth and is recognized all over the globe, then there really is no choice, Gold remains the key asset class to hold for wealth protection and security.

It will be a long time, if ever, before Bitcoin or any digital currency comes close to providing the value that gold does.