Endeavour Silver: Transitioning To The Next Phase Of Growth

Endeavour Silver completed its turnaround in 2020 relative to just a couple of years ago, increasing production from its operating mines, extending the mine life at its operations, reducing costs, and advancing its flagship asset, Terronera. Endeavour remains one of the very few primary silver producers left (currently about 55-45 silver-to-gold) in the space following the recent acquisition by First Majestic of a scalable primary gold mine in Nevada and the pending deal between Fortuna and Roxgold.

Endeavour operates three silver-gold (and gold-silver) mines in Mexico and will soon be adding a fourth operation following the construction of Terronera. Terronera is a company changer for Endeavour as it will significantly boost production and lower companywide all-in sustaining costs, which is material given Endeavour isn't a low-cost producer. Once Terronera is online, Endeavour will be able to advance its development project pipeline and, in all likelihood, earn a market re-rate which will lower its cost of equity. This will be important as the company has made it known it will be on the lookout for potential M&A or single-asset acquisitions. There have been some recent changes regarding leadership as founder and CEO Brad Cooke will step down and become the executive chairman. Dan Dickson will be the new CEO, and Christine West will be the CFO.

With the turnaround at Guanacevi and Bolanitos complete and higher silver prices, Endeavour’s cash flow generation has improved significantly. In Q4, 2020, Endeavour generated $21.6m in operating cash flow, up from negative (-$7.90m) in Q4 2019 through the production of 1.18m oz. Ag at AISC of $18.52/oz. This was followed up in Q1 2021 as Endeavour generating operating cash flow of $5.2m; however, the company held metal back, invested more heavily in exploration, and advanced the Terronera FS. During Q1, Endeavour also announced the sale of its El Cubo project for $15m in cash and share payments and $3m in contingency payments. Endeavour's cash position at the end of Q1 stood at $86m with working capital of $113m.

Cornerstone Assets: Endeavour has two cornerstone assets, one of which is producing and the other, Terronera, in the development stage. Endeavour also has two smaller assets in El Compas and Bolanitos.

Terronera (Mexico, Development): Endeavour's most valuable and soon-to-be flagship asset is undergoing an updated feasibility study and awaiting permits such that Endeavour will look to make a construction decision before the end of the year if not in early 2022. Terronera will become both its largest and lowest-cost mine. Highlights from the 2020 feasibility study include (which is subject to change):

The updated feasibility study could result in improved economics based on the potential to expand the operation by 25% to 2ktpd, reserves and resource expansion, optimized mining equipment, and optimize recovery rates by evaluating grind size vs. flotation stages.

There Terronera and La Luz veins remain open at depth and to surface. There is also the potential to increase resources through the La Loma-Los Pajaros veins and the Real Alto area, where there are twelve veins that have seen minimal drilling with encouraging results. Targets range from 500m to 1,000m long by 1-2m thick. As it currently stands, Endeavour could finance construction through cash on hand and ongoing cash flow generation; however, we have seen a rise in operating costs and likely capital costs due to inflation. Further, if Endeavour decides to go with a larger plant size, the company will most likely add some debt to its balance sheet. This will be the case anyway to ensure Endeavour has more than enough liquidity.

Guanacevi (Producing, Mexico): Having been in production since 2005, Guanacevi has served as an excellent foundational asset for Endeavour over the years, more recently completing an operational turnaround highlighted by increased output at lower costs. Endeavour has identified a total of eight orebodies, three of which are currently being mined. Similar to its other operating mines and key development project, Guanacevi is a silver-gold mine. In 2020, Guanacevi produced 3.1m oz. Ag and 9.8k oz. Au. Endeavour has also been successful increasing high-grade silver reserves and resources.

Bolanitos (Producing, Mexico): Bolanitos complemented Guanacevi; Endeavour's second producing operation was acquired in 2007, albeit at low production levels. This continued until a new orebody was discovered in 2008. The plant was expanded by over 300% to 1,600tpd. Endeavour subsequently discovered ten new orebodies, mined out seven out of ten, and is currently mining the La Luz, Lucero, and San Miguel deposits. Bolanitos is currently operating at 1,100-1,200tpd. Bolanitos is a gold-silver mine. Bolanitos is also Endeavour's lowest-cost mine until Terronera comes online. In 2020, Bolanitos produced 353k oz. Ag and 19k oz. Au.

El Compas (Producing, Mexico): Endeavour’s newest producing asset is a small gold-silver mine acquired in 2016 and brought into production in 2019. There are ten untested vein targets at El Compas, and the recently acquired Calicanto and Veta Grande properties have known veins, small historic mines with exploration potential. In 2020, El Compas produced 90k oz. Ag and 8.3k oz. Au. El Compas came online shortly before the El Cubo mine was depleted, which helped offset some of the lost cash flow generation.

Over recent years, Endeavour has expanded its asset portfolio such that it now has one key development project (Terronera) and six exploration projects in Mexico and Chile. With the construction of Terronera and the company advancing other projects such as Parral, which together with Terronera will mark the next phase of growth for the company. 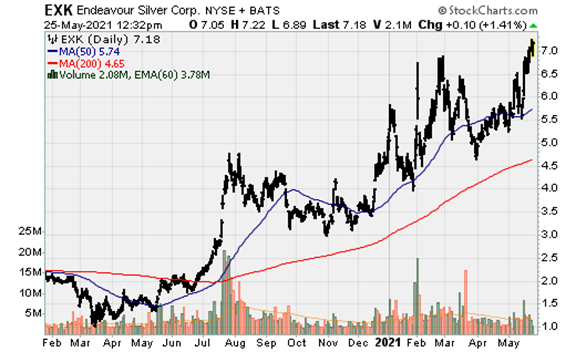