Gold Seeker Report #32: This Week in Mining; A Much Needed Healthy Correction

This was a volatile week to say the least but in a bull market this should be expected, especially after the metals essentially went straight up from March through early September. The mining equities sold off far more heavily and are trading with implied gold prices around $1,550-$1,625/oz. (depending on the company). If you learn to embrace these violent pullbacks, your returns could higher. For example, had you taken some profits in August or so, you would have been able to buy back the same companies today but get more shares. That is one strategy, with another being sit tight! If you can block out all the noise and understand why you bought precious metals and the underlying mining companies, this will be a much more enjoyable ride. As expected, with the metals getting smashed this week, especially silver, most companies likely held back news they would have otherwise released. Waiting for better market conditions increases the likelihood the market will react positively to a given piece of news. This could explain why this week's news was so light.

Note: Please be Sure to sign up for our free email list @ http://www.goldseeker.com. You can also give our subscription services a test run with a free 30-day trial.

Abitibi Royalties: The company received conditional acceptance from the TSXV to conduct the normal course issuer bid. Under the 2020 NCIB, Abitibi may purchase for cancellation, from time to time at its discretion, up to 624.145k shares of its issued and outstanding, which represents 5% of the Abitibi Royalties’ issued and outstanding common shares. 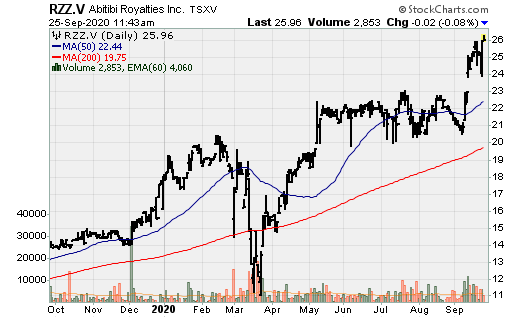 Bear Creek Mining: has approved, and will shortly commence, construction of several capital projects in the Corani region to support the long-term health, education and economy of local communities and provide early construction infrastructure for the Corani mine. These projects include:

Bluestone Resources: Reported additional high-grade drill assays received from its infill drilling activities currently underway at the Cerro Blanco gold project. After a brief hiatus where the drilling activities were suspended to comply with COVID-19 related restrictions in Guatemala, a total of five drill rigs are now operational, located in the underground workings and on surface. The company is advancing the project rather quickly and we expect the mine plan to be updated, likely accommodating higher output.

Results from six underground and four surface holes are reported in this press release. Highlights include the following intercepts representing true widths of the veins:

Bonterra Resources: The company released some results from its on-going drilling campaign on the Barry project. Highlights include:

FireFox Gold: Renowned geologist has joined the technical advisory board.

Great Bear Resources: provided an update on metallurgical testing underway at its 100% owned flagship Dixie Project in the Red Lake district of Ontario. Highlights include:

Hecla Mining: The company reported strong production and cash generation as it released preliminary production results for Q3 and the anticipated cash position as of end Q3. Estimated silver and gold production for Q3 is 3.2-3.4m oz. Ag and 41-43k oz. Au. Operations should only improve as times goes on for two primary reasons; I) Production from Lucky Friday will essentially double to 5m oz. p.a. as grades increase at depth by a fair degree and II) The company will likely, several years down the road start building its next asset, Montanore, which will add material silver and copper production. The company has no need to make any additional acquisitions as it will also focus on optimizing its Nevada Gold assets as well as having another sizeable development project in Rock Creek.

Integra Resources: The company intersects additional high-grade gold and silver at Florida Mountain, which include:

Maverix Metals: entered into a binding purchase and sale agreement to acquire a portfolio of 11 gold royalties from Newmont Corporation for upfront consideration of $75 million and contingent payments of up to $15 million. The portfolio consists of assets in Mexico, the US, Canada and Guatemala, ranging from construction to exploration stage.

Near-term cash flowing assets from the portfolio include Camino Rojo (production expected in 2021), which a 2% NSR royalty and early works activities are expected to commence at the Cerro Blanco project in Guatemala (being developed by Bluestone) which is a 1.0% NSR royalty. There are three other assets in the development stage and six exploration stage. These include:

Omineca Metals: Announced it commenced its maiden diamond drill program at the Wingdam gold exploration project in the Cariboo Mining District of south-central British Columbia. Initial drilling is focused on an area within a one-kilometer radius adjacent to and upstream of the single underground crosscut that yielded 173.4 ounces of placer gold. The drill program follows initial exploration consisting of airborne geophysics, rock sampling and soil geochemical analysis. 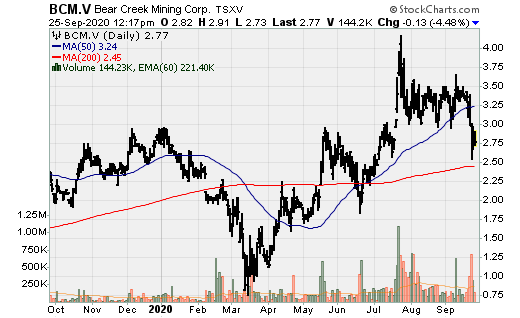