18 hours 15 minutes ago
The Short Position in SLV
1 day ago
Here Is Why Silver Demand Will Climb to a New Record High! - Keith Neumeyer
4 days 1 hour ago
This Is Why NOW Is the Perfect Time to Buy Silver - Garrett Goggin
4 days 1 hour ago
Rico Charges Dropped On Silver Manipulation Trial
4 days 23 hours ago
Has Inflation Been Defeated?

Signs of a Bottom in Gold and Silver Prices

The U.S. dollar’s value is set to get diluted by another $1.9 trillion.

On Saturday, Senate Democrats narrowly passed their massive COVID relief bill on a party line vote. It includes $1,400 in additional free-money handouts for most Americans, $350 billion in aid to state and local governments, and hundreds of billions more for various other pet programs.

Upon approval by the House of Representatives and President Joe Biden’s signature, expected later this week, another wave of government-induced inflation will cycle through the economy.

The impact on commodity and precious metals markets won’t necessarily be felt immediately. But investors who can see what’s coming will want to position themselves ahead of the trend.

Last week saw some smart money rotation into mining stocks ahead of a potential bottom in precious metals spot prices. The HUI gold miners index (NYSE:HUI) finished out the week with a 4.7% gain, despite continued weakness in metals markets. 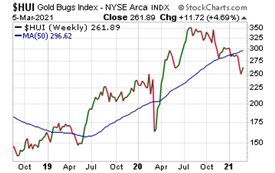 This positive divergence is a bullish sign. It may indicate that a significant bottom is in, or in the process of forming, in gold and silver markets.

After becoming deeply oversold, the HUI could now rapidly push toward to its uptrending 50-week moving average line on a rally.

That would likely coincide with gold prices recovering off their similarly oversold condition.

Since peaking 7 months ago at over $2,000/oz, gold has trekked lower in a large corrective pattern. That correction is now getting long in the tooth, assuming as we do that it’s occurring within the context of a larger, structural bull market. 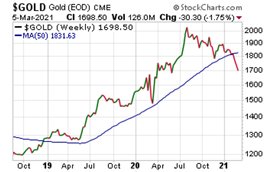 Bullion dealers have been absolutely slammed with demand for coins, bars, and rounds this year – draining available inventories in the process. While Money Metals is still well stocked, many other dealers are nearly wiped out or are quoting month-long delays on many items.

Availability has actually improved some since the height of February’s buying frenzy. However, scarcity-driven premiums on popular products such as Silver Eagles remain elevated.

It is unusual for extremely stressed conditions in the bullion market to persist while spot prices merely bounce around within a capped range.

Although frustrating for bulls, the people who should be nervous in this environment are the bears – in particular, the naked short sellers. They face unlimited risk in the event of a price spike driven by physical shortages.

A demand strain on minted bullion products doesn’t necessarily imply a shortage of silver itself.

At least not immediately.

Industrial users of silver normally command a much larger share of the total physical market than investors. But the pace of investment buying over the past year (nearly 600 million ounces) has shifted the scales to the point where it actually exceeds total industrial demand.

Of course, industrial demand for silver suffered last year due to economic lockdowns that are gradually being lifted. As manufacturers ramp back up, so will their need for silver.

But industrial demand can’t return to normal at the same time as investment demand remains elevated without generating a massive supply deficit. These powerful dynamics of physical supply and demand will ultimately exert pressure on prices – perhaps putting a real “squeeze” on paper silver short sellers.