17 hours 7 minutes ago
The Short Position in SLV
23 hours 14 minutes ago
Here Is Why Silver Demand Will Climb to a New Record High! - Keith Neumeyer
4 days ago
This Is Why NOW Is the Perfect Time to Buy Silver - Garrett Goggin
4 days ago
Rico Charges Dropped On Silver Manipulation Trial
4 days 21 hours ago
Has Inflation Been Defeated?

THERE IS ONLY ONE GOLD FUNDAMENTAL

The single fundamental for gold is that gold is real money. PERIOD. Gold’s value is in its use as money.

Whereas gold is real money, the US dollar and all paper currencies are substitutes for real money, i.e., gold.

Correspondingly so, there is only one reason the price of gold in dollars rises over time. The higher price of gold over time reflects the loss of purchasing power in the US dollar that has already occurred.

If investors and others who think they know so much about gold understood that fact, they would stop proclaiming higher prices for gold in anticipation of a potential collapse in the dollar.

In other words, the price of gold will never outrun the cumulative effects of inflation. This means that the higher price for gold is offset by the dollar’s actual loss in purchasing power.

The price of gold continues to increase over time and reflects the deterioration and loss in purchasing power of the US dollar.

However, in inflation-adjusted terms, the price of gold has never exceeded its 1980 peak and has actually failed to match it, both in 2011 and 2020. In addition, each successive peak is somewhat lower than the previous peak.

Here is the chart which shows those peaks… 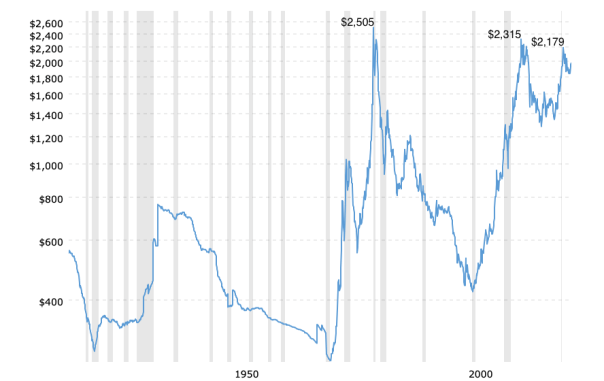 In January 1980, the average closing price for gold was $678 oz. The equivalent price today in inflation-adjusted dollars is $2505 oz. (see chart above).

As the dollar continues to lose purchasing power, the prices on the chart continue to change. Below is a table which reflects actual gold prices compared to changing inflation-adjusted prices.

With this information we can clarify the difference between price and value. At $2000 oz., the price of gold is one hundred times higher than it was a century ago at $20 oz.

But, an ounce of gold at $2000 today is no more valuable than it was a hundred years ago. That is because gold’s price at $2000 oz. reflects the accumulated loss in purchasing power of the US dollar.

The price of gold continues to rise but its value is constant and unchanging. This is especially important if we are to understand profit potential in gold – or the lack of it.

IS THERE PROFIT POTENTIAL IN GOLD?

Yes; but, conditionally so. And there are limits to that profit potential which can be seen ahead of time.

Looking again at the chart above, there are two decade-long periods (1970-80 and 2000-11) during which gold’s price movement offered significant profits; and a third period (2016-2020) of shorter duration, during which the gold price nearly doubled .

When gold’s price reached $850 oz. in January 1980, it seemed as if nothing would stop it from running straight to $1000.  But it was stopped, and began sliding downhill quickly.

Two and one-half years later, in June 1982, gold’s price had declined by sixty-five percent. At $300 per ounce, that may well have seemed like a good point to buy gold. And it was – IF you were short-term oriented.

Seven months later, in January 1983, gold peaked at $511 oz. That was the optimal point for profit taking. After that, gold’s price dropped back quickly to the $300 oz. mark and eventually bottomed out at $250 oz. in 1999, seventeen years after the initial drop to $300.

There are other occasions where short-term trades in gold offered limited profit potential if you recognized them as such and didn’t fall prey to unrealistic expectations.

Upside limits come into play when gold approaches its inflation-adjusted value. That can be seen on the chart above by observing the three price peaks (1980, 2011, 2020).

Any combination of lower gold prices and the cumulative ongoing loss in US dollar purchasing power increases the gap. This is what happened between 1980 and 2000.

Looking at the chart above, we can see that the gap was widest and the profit potential greatest in 1999-2000; more so than at any other time since 1980.

What if the US dollar does collapse; and the price of gold does go to $10,000? Won’t that be profitable for those who own gold; and might it negate or nullify the above analysis?

No; most assuredly not.

In order for gold to reach $10,000, the US dollar would have to lose eighty percent of its current purchasing power – before you see the gold price reflect it.

If that were to happen, most goods and services would increase in price five-fold.

Irrespective of supply chain disruptions, etc. you could be paying $20 per gallon for gasoline. A single hamburger at In-N-Out Burger would cost at least $15.

Any profits in gold would be needed to sustain and maintain your current lifestyle.

There are opportunities for short-term, profitable trades in gold. Beyond that gold is original money and a long-term store of value; nothing more.

Gold is not an investment, nor is it the next big thing. Its price is determined exclusively by the fortunes of the US dollar.

Rather than looking for profits in gold and subjecting oneself to disappointment, better to focus on accumulation of the metal.

How much gold you own is more important than its price or any supposed profit potential.