1 day 7 hours ago
This Is Why NOW Is the Perfect Time to Buy Silver - Garrett Goggin
1 day 7 hours ago
Rico Charges Dropped On Silver Manipulation Trial
2 days 4 hours ago
Has Inflation Been Defeated?
3 days 18 hours ago
COT Silver Report - August 12, 2022
5 days 2 hours ago
Was $18 Silver the Bottom? Next Pivot? - Lawrence Lepard

Back in the summer of 2011, many of us were reading about the Weimar Republic and its hyperinflationary downfall. A decade later, it's time to revisit the history.

The go-to book in the summer of 2011 was "When Money Dies” by Adam Fergusson. Originally published in 1975, Fergusson updated the text in 2010, and following the initial onslaught of debt monetization and QE1 and QE2, it became required reading.

Maybe you didn't read it back then. If not, you should do so now, in the summer of 2022. If you read it a decade ago, it's time to crack it open once more.

Now, you might be saying, "Hey, look. It's been twelve years and I'm not falling for that hyperinflation stuff again". OK, fine. You can believe whatever you want. However, Weimar Germany was not the first regime to collapse under the weight of excessive money creation, and it won't be the last.

Additionally, have you ever heard these quotes? The first from Shakespeare, the second attributed to the 19th-century American humorist Mark Twain.

These two idioms instantly came to mind last week as soon as I cracked open "When Money Dies" for the first time in eleven years. And why? All I had to do was make it to page 3 before what Fergusson wrote nearly fifty years ago became instantly relevant to today.

In my paperback version, there are just three paragraphs on page 3. Here's the first. Keep in mind that Fergusson is referencing the events of 1921 and 1922. In an amazing coincidence, he could just as easily have been writing about 2021 and 2022.

To paraphrase: "It was unimaginable in 1921 that things could actually get worse in 1922". LOL. Have you not had this exact conversation with your friends and family at some point in the past six months? And things got even worse in 1923!

Next, let's examine paragraph two from page 3. What do we find here? 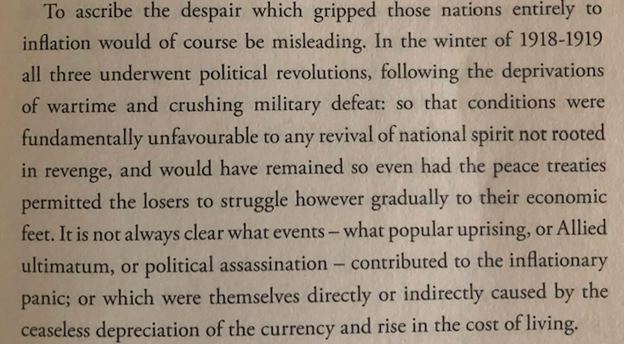 So now we move on to the final paragraph of page 3—and this is where it gets a little spooky. Read this next excerpt and remember that it was written 50 years ago about events that took place 100 years ago. 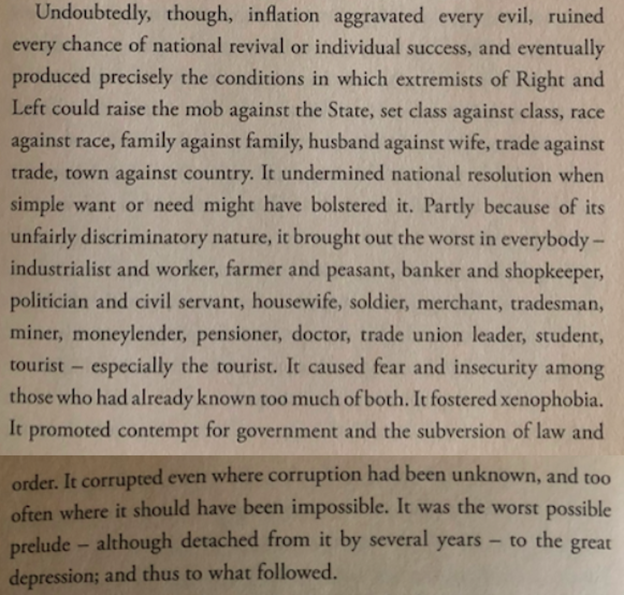 Is that not an accurate description of where we find ourselves in 2022? Extremists raising mobs. Groups of citizens pitted against each other. Contempt for government. Pervasive corruption. It was all there in 1922, and it's all there now, 100 years later.

So, what happened next in 1923? Well, for that, you're going to have to buy the book. The good news for you is that it's readily available on Amazon and elsewhere. While it's not the usual fun and breezy summer read, it's definitely required homework for anyone willing to study the economic history of fiat currency devaluation and then prepare for what inevitably follows.