August 18, 2022 The Decline and Fall of American Empire
August 16, 2022 Welcome to the World of Bankster Magic Where We Shall Have “Weather Followed by More of the Same Unless it Changes.”
August 10, 2022 Unemployment is the Cloak under which this Dagger of a Recession Hides
August 03, 2022 Economic Predictions for H2 2022, Part 2: The Great Currency War for Global Dominance
July 29, 2022 REAL GDP SAYS: “Get Real! Trust not the Fed, economists or the president. The REAL economy is collapsing all around you!”

18 hours 43 minutes ago
The Short Position in SLV
1 day ago
Here Is Why Silver Demand Will Climb to a New Record High! - Keith Neumeyer
4 days 2 hours ago
This Is Why NOW Is the Perfect Time to Buy Silver - Garrett Goggin
4 days 2 hours ago
Rico Charges Dropped On Silver Manipulation Trial
4 days 23 hours ago
Has Inflation Been Defeated?

An Apocalypse Upon Us: How much more can we take?

I know: Let’s also rapidly raise interest rates and drain money supply, going into a recession, and then follow Larry Summer’s latest advice and hit everyone with tax increases to punish the populace for inflation during such distressed times. Then let’s declare new stringent measures for the new pox upon us, which has just been declared by WHO another global health emergency. That ought to pretty well destroy the tatters that remain of the global economy and of human psyches in time for the planned Great Reset!

Add to that children being taught they cannot tell if they are a boy or a girl, an ostensibly female Supreme Court justice celebrating being the first Black woman on the court even as she tells us “they” have no idea what a woman is, a sudden plethora of newly created genders with requirements to use newly created bastardized pronouns, people being fired if they don’t use those pronouns, and you add a level of social confusion and conflict heretofore unseen by humankind.

Then watch megacorps suck up all the housing with boundless all-cash bids no normal individual can compete against; add Bill Gates sucking up all the farmland that the Chinese don’t buy up, and you have a world where “you vill own nothing,” but vill you really be as happy with it as the Bondesque villain with the heavy Austrian accent named Klaus Schwab soothingly tells you, you will be? 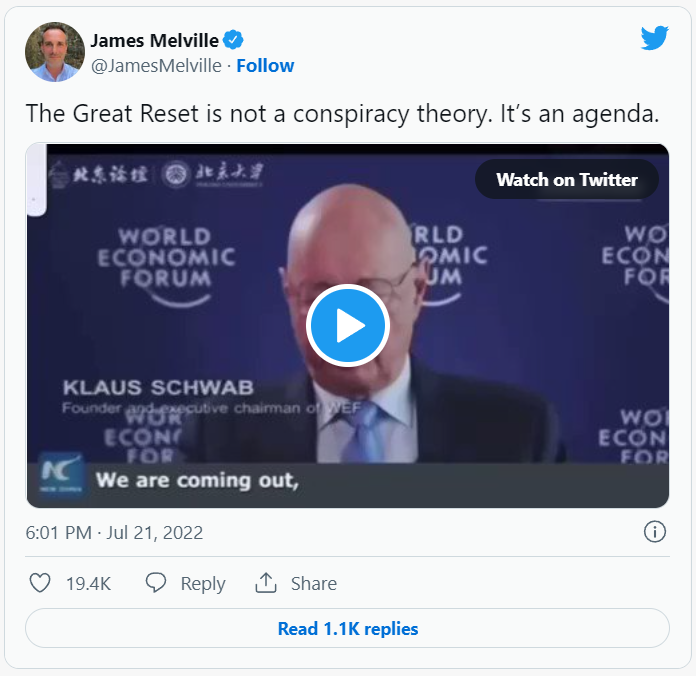 I watched that and wondered, “Is this one of those videos that interrupts all broadcasts on all the television channels of the world in a James-Bond movie when the secret nuclear moon base is ready to fire its lasers at all major cities if they don’t accept the new global despot’s agenda?”

Someone needs to give Klaus a pretty white kitty to pet.

Then pile in the self-destruction of the Chinese economy under Xi’s Zero-Covid policy, and the rapid collapse of China’s own housing bubble and the questionable status of its banks, and heap on its threats of war against Taiwan, its dictatorial over-riding of the once-vibrant free market of Hong Kong, and its screw-the-doors-shut-on-your-apartment approach to enforcing Covid quarantines, and you have a major nation on the verge of civil war and international war at the same time. That’s a nation whose vibrant economy once helped pull the world through the last financial crisis, which is looking increasing like it will be having a “going out of business” sale sometime early in the present crises.

Then team the currencies of those badly flailing economies to try to create a new global trade currency in a currency war with the current global war currency to see if you can possibly spread total currency collapse of all currencies to the entire planet just in time for your launches of central-bank digital currencies aligning conveniently with the crash of many crypto currencies.

Add to that flaming chickens by the tens of millions, gassed and incinerated to stop the spread of an avian pandemic. Then throw into that flaming food-processing plants, just in case the shortage-by-sanctions-and-chickens plan wasn’t taking us quickly enough toward starvation. Then make sure you drive the majority of Dutch farmers out of business so they don’t compete with your clone-grown, meat-cell burgers. Clamp down on their use of fertilizers when you’ve also managed to more than double the price of fertilizers in order to drive as many farmers out of business as you can as quickly as you can.

With so many of these things naturally going so bad, you have to think our leaders who are doubling down on all of it with their forced closures of just about anything every time you turn around and austere mandates and constant divisiveness from the top (both Trump and Biden in the US) … these leaders must surely intend to inflame the populace of each nation as much as they possibly can. There are no peacemakers on any side. Just wedges and sledge hammers with which to pound them. These clowns either think people have an unlimited capacity to absorb more man-made, woman-made, they-made stress; or their minds are as fried as a fish in hell or they actually intend to push their societies into self-annihilation to solve the global population problem.

In my next Patron Post, I’ll be laying out where I see the world as likely heading in the remainder of this year into 2023 based on the kinds of crises that are now endlessly raining down upon us. I’m sure by the time I am ready to publish it this week, there will already be new black swans landing in everyone’s back yard to write about.