Are We Nearing the Final Days of the Dollar?

The dishonest fiat Federal Reserve Note “dollar” is slowly dying and will eventually need to be replaced with something more trustworthy.

Perhaps it will be presented to Americans as a series of dramatic monetary reforms. Maybe people will be using something else entirely as money. 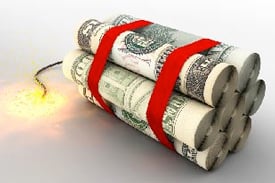 Either way, the destruction of the U.S. dollar as the world’s reserve currency promises to be a defining moment in the nation’s history and this moment may be growing nigh.

Should historians write a timeline of the dollar’s decline and fall, certain events must be included.

These include Nixon closing the “gold window,” the inflationary crisis of the 1970’s, the beginning of the secular bull market in gold around the turn of the century, the 2008 financial crisis and the advent of unhinged central bank policy.

There is no telling for sure what the last entries on this timeline will be.

The latest events in Ukraine and the unprecedented economic sanctions that have followed are driving a new wave of investors into gold and silver bullion.

Right now, we are seeing the largest wave of retail buyers ever. It is safe to say something extraordinary is happening.

It began two years ago with a sort of perfect storm.

America suffered the advent of COVID with its attendant panic and lockdowns, a fiscal and monetary policy response which included trillions of dollars being printed and dropped from figurative helicopters, and then a disputed presidential election.

Now gold and silver buying activity is accelerating again. This new rush can be attributed, at least in part, to inflation breaking into Americans’ collective consciousness.

Canadian Truckers may earn a spot on the dollar-demise timeline. Prime Minister Justin Trudeau’s response to the trucker protest introduced a terrifying new concept to much of the world; the electronic financial system can be used as a weapon against the public on a whim.

Thousands of Freedom Convoy truckers and their supporters in Ottawa probably considered the possibility of being arrested and paying some fines. They probably weren’t expecting their government would attempt to cancel their ability to function in modern society.

Trudeau declared an emergency and ordered Canadian banks to freeze accounts. Without trial or due process, protestors and those who supported them with donations faced the prospect of being unable to purchase anything, including basic necessities.

The move appears to have backfired. Revealing to people worldwide that their bank accounts can be frozen instantly, based upon nothing more than the whims of politicians, wasn’t a move to inspire confidence in banks or the wider financial system.

Following news that bank accounts would be frozen, the five largest Canadian banks went offline for several hours. Many suspect Canadians were rushing to withdraw funds, though the official story is the outage was related to “technical” issues.

The Emergency order was quickly lifted, and Canadian banks have been working to reassure clients about the safety of their deposits.

Perhaps Trudeau and the other Canadian leadership recognized that destroying confidence in banks wasn’t such a great idea.

That lesson appears to have been lost on leadership elsewhere.

PayPal recently shut down its service in Russia. Visa, MasterCard and American Express followed suit. Now millions of Russians are discovering the cards in their wallets can be switched off, without warning or recourse.

Millions more outside of Russia and Canada recognize they could be next. All it takes is an affiliation with the political opposition or citizenship in the wrong country and they can end your ability to function financially.

Lots of nervous people are searching for alternatives. Physical gold and silver are among the first assets to come up. Precious metals have been used as money for thousands of years and, in a pinch, could be again. And coins, rounds, and bars are non-cancelable.

Time will tell if the weaponization of the financial system is what finally destroys the confidence underpinning the Federal Reserve Note and other fiat currencies. Unprecedented, record-breaking demand for physical metal is one indicator people are wising up to the risks.