Banks Are Restocking Gold At Fastest Pace In Years

Banks are in the process of restocking gold at a pace not seen in years.

This analysis focuses on gold and silver within the Comex/CME futures exchange. The charts and tables below specifically analyze the physical stock/inventory data at the Comex to show the physical movement of metal into and out of Comex vaults.

Registered = Warrant assigned and can be used for Comex delivery, Eligible = No warrant attached – owner has not made it available for delivery.

In a recent article, I speculated that the big players might be prepared to let the price of gold run. Part of this will mean increased delivery volume in April after a very strong March. The Comex vaults have been steadily depleted over the last several months, however, 1.6M ounces of gold just showed up since March 1 as shown below. This is the largest inflow since October 2020 and we are only halfway through March! 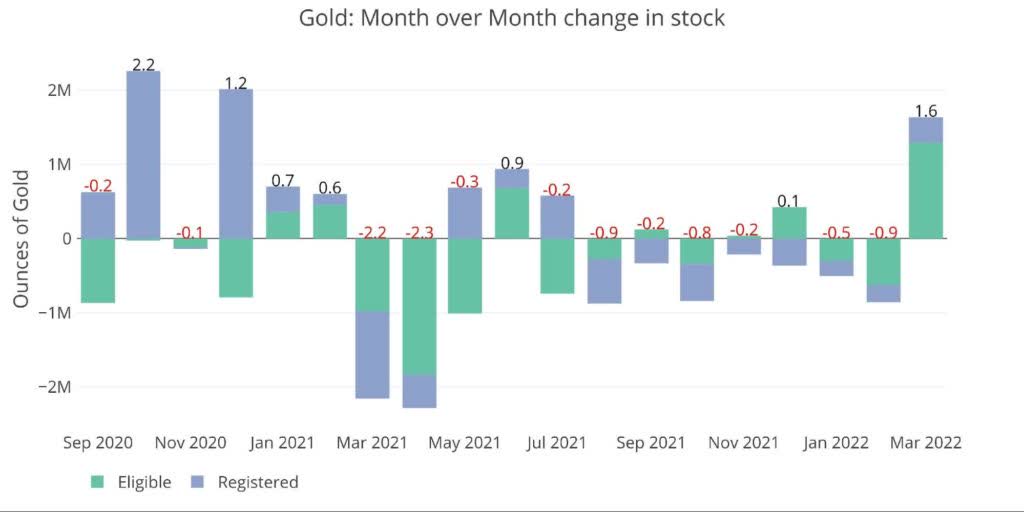 After all, as shown below, this metal has just shown up in the last three days and is primarily in Eligible. Most of it is not yet available for delivery, but it can be moved over instantaneously if the owner so wishes. 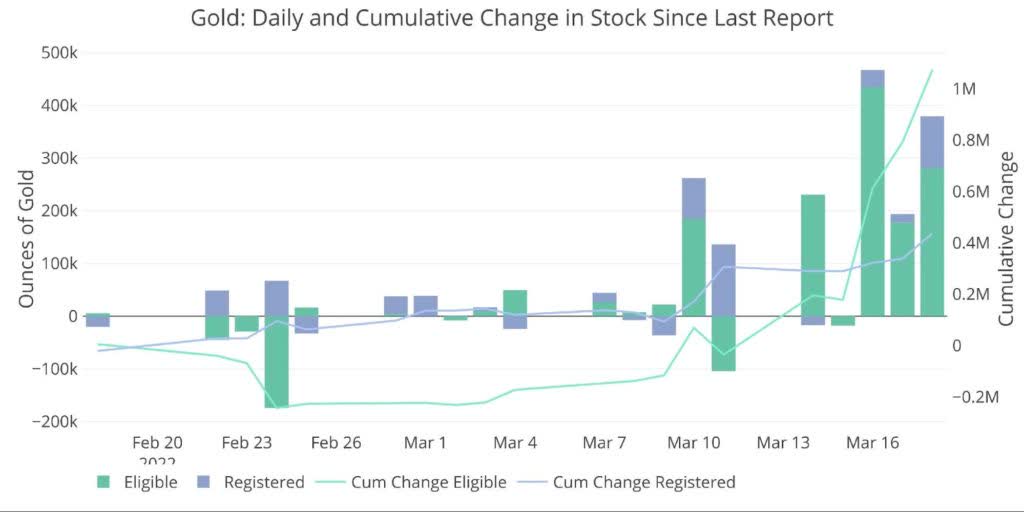 Silver continues to show a different trend than gold. It’s as if the big players are fully focused on gold for the moment. Nearly 3.9M ounces left Comex vaults in just the past few days. 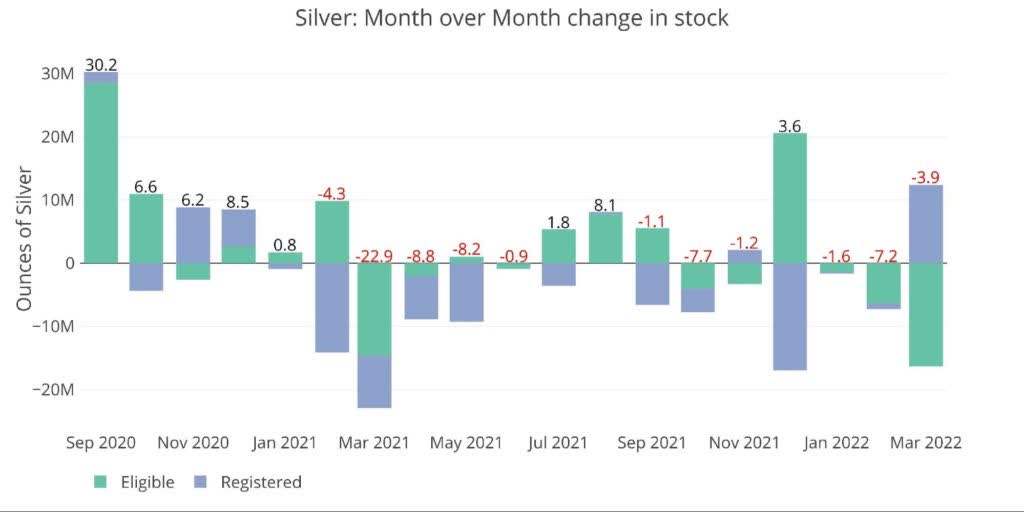 Looking at the detailed report shows the mechanics. Metal that was listed as Eligible was being moved to Registered to satisfy the extremely strong delivery demand being seen in March. Unlike gold, this metal has not been restocked and continues to leave Comex vaults. In aggregate, the Eligible category has lost 17.7M ounces over the last month! 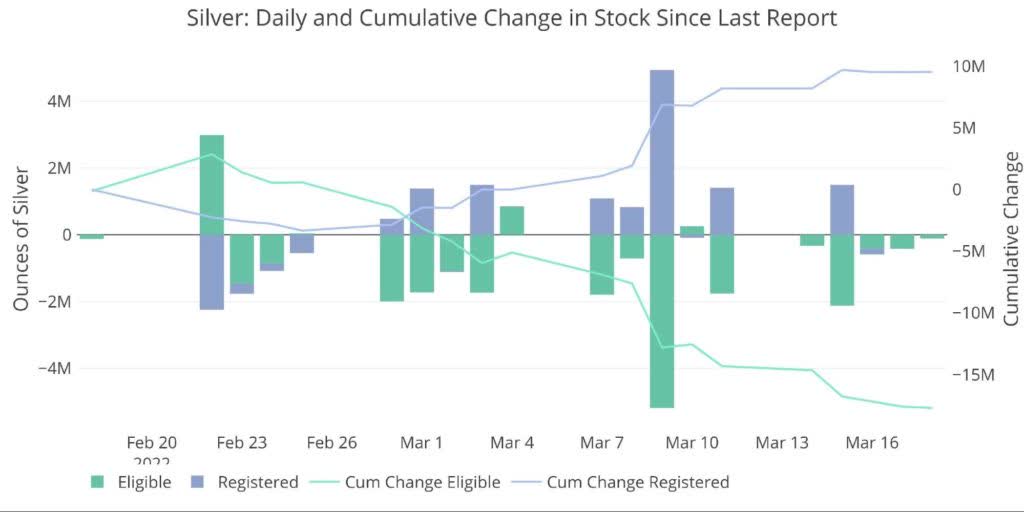 The table below summarizes the movement activity over several time periods.

Rhetorical questions: Why are the banks bolstering gold reserves if they appear so well-capitalized? How much metal is actually there ready for delivery? If it’s the full 19.2M, then why a sudden flood of new metal? Whether it’s restocking March or preparation for April, there should be enough metal to satisfy demand. Right?

The next table shows the activity by bank/Holder. It details the numbers above to see the movement specific to vaults.

Why is every vault adding metal all of a sudden? Why is JPMorgan aggressively restocking its inventory? What are the banks preparing for? 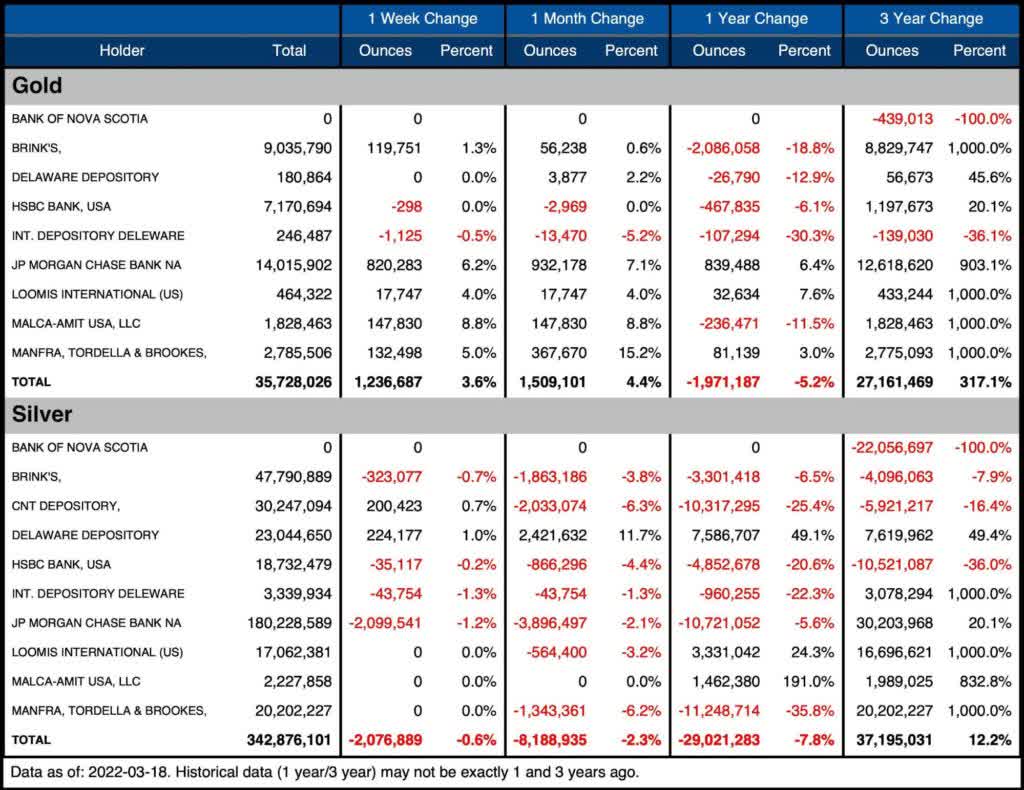 As postulated in the margin analysis, all eyes seem to be on gold. The banks are clearly preparing for a large delivery volume. The current open interest positioning, combined with the lack of increase in margin rates suggests this could be allowed to happen right now. Add the current inventory increase as more evidence.

Silver continues to be the forgotten metal. This isn’t entirely surprising though. Gold is the true historical currency of the world. Central banks own hordes of gold (Russia wishes they had more). If the market were to start moving in a big way, it’s going to happen in gold first.

The question now becomes: why is this being allowed to happen? None of the powers that be want a surging gold price. It calls into question the entire fiat system. My running theory is that the banks pick their times when to fight it and when to ride it. Right now, the momentum is strong and they appear to be preparing to ride the wave. Prices declined this week, but there is clearly a bullish trend afoot.

Be cautious though, there are levers in place (e.g., margin and short selling) that can cause the market to turn on a dime. Expect these levers to be used when they can exact the most impact (e.g., speculation reaches a fever pitch). This was on display on March 9 when margin requirements were raised at the same time gold fell by $80.

Perhaps now is not the time to strike, but no question that time will come. The question is, how soon. The data hints at late summer (after the June contract), but an opportunity could present itself much sooner given the market volatility. Gold prices have been under pressure all week.

Zooming out and looking at the inventory for gold and silver since 2016 shows the impact that Covid had on the Comex vaults. Gold had almost nothing in the Registered category before JPMorgan and Brinks added their London inventory with nearly 20M ounces.

The gold inventory peeked in February of last year and has been steadily falling ever since aside from brief increases that don’t seem to last. Will the current increase follow the same fate (see spike on far right)? 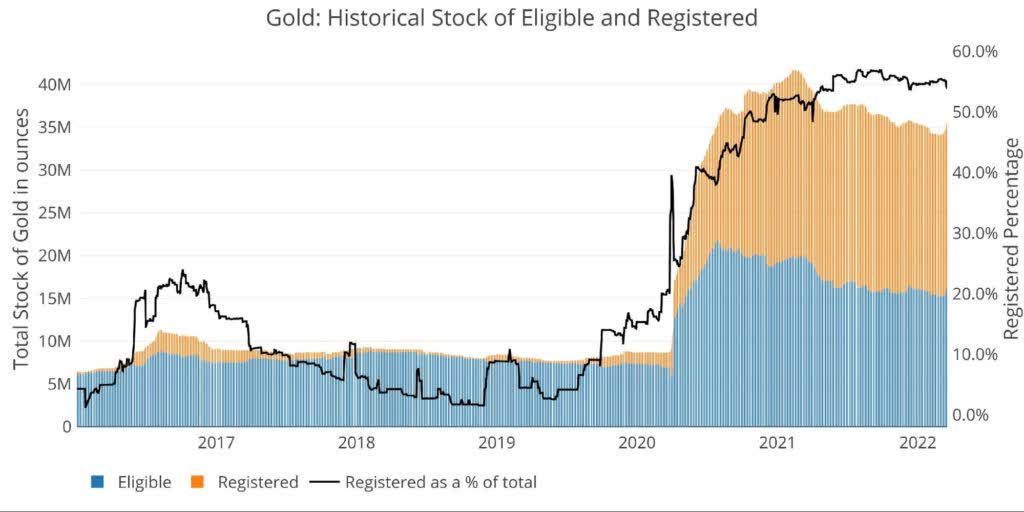 Silver also saw an increase in Registered around March 2020 but has been draining, albeit more slowly than gold.

The recent uptick in Registered as a % of the total (far right spike in the black bar) is due to the recent flip of Eligible to Registered noted above. 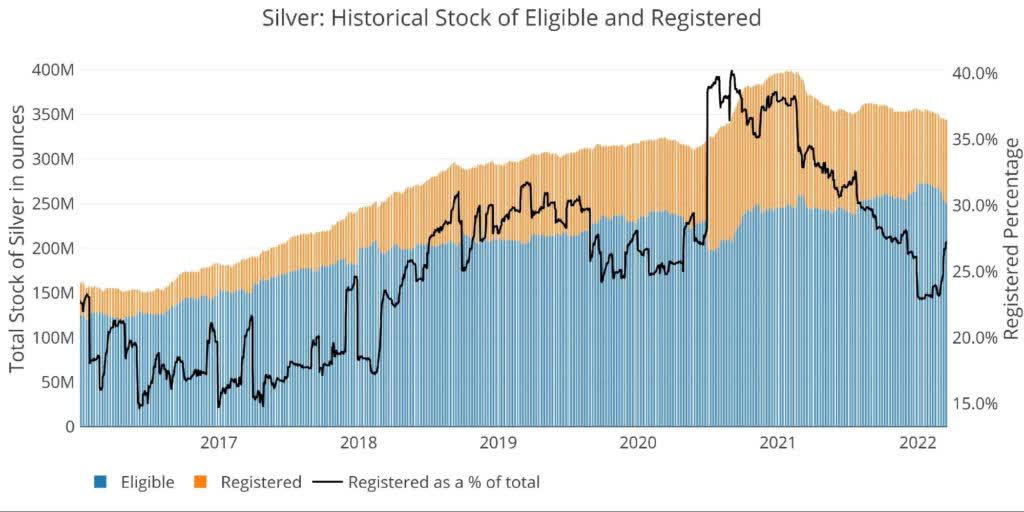 As can be seen in the chart below, the ratio of open interest to total stock has fallen from over 8 to 1.5. In terms of Registered (available for delivery against open interest), the ratio collapsed from nose bleed levels (think Nov 2019 where 100% stood for delivery) down to 3.26 in the latest month. This is due to the recent surge in open interest.

On March 7, the ratio hit 3.41. This was the highest since September 2020. The current restocking has helped bring this ratio down along with open interest falling some. 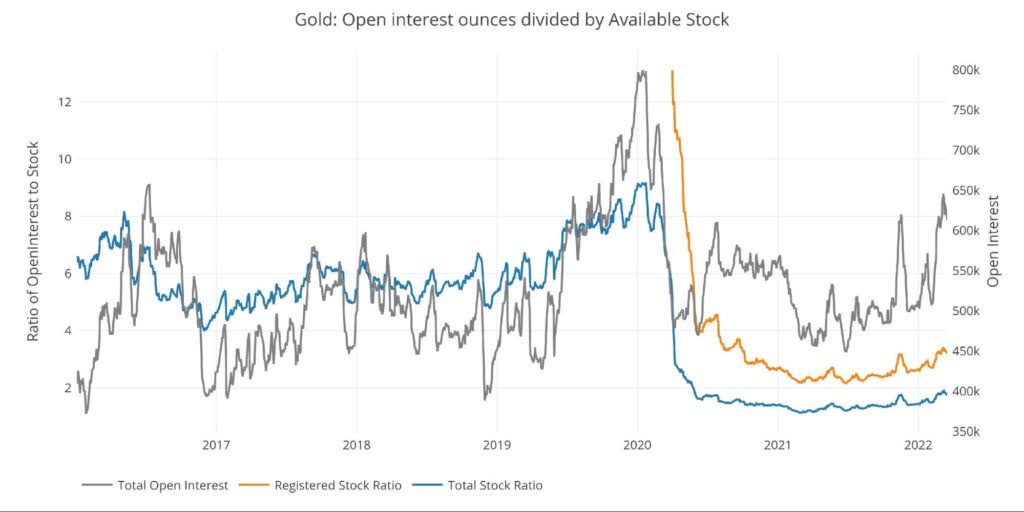 Coverage in silver is weaker than in gold with 8.4 open interest contracts to each available physical supply of Registered (down from 9.8 on March 8). This is near the highs from June 2020. The current dip can be entirely attributed to open interest falling from 168k on March 8 to 157k today. This drop-in open interest occurred without margin rates going up at all. 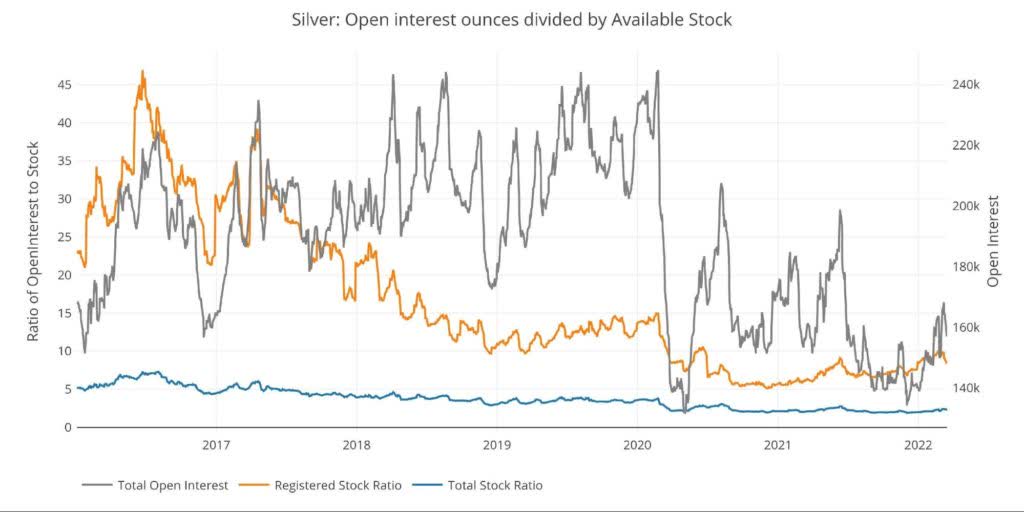 The Comex gold market has been flashing warning signs since early January. This continues to be the case. The latest influx of metal further supports the notion that banks are preparing for higher delivery volume and potentially higher prices. That being said, with over 12 years of experience watching this market, nothing is ever easy or simple. The bullish setup is there, but something tells me this game has a few more twists ahead. Let’s see how the data unfolds.

SchiffGold is a full-service, discount precious metals dealer specializing in investment-grade gold and silver bullion. We offer a range of related services, from vault storage partners to physical gold IRAs. Renowned investor Peter Schiff founded SchiffGold in 2010 to provide a trustworthy source of bullion for his brokerage clients. Peter has always advised long-term investment in physical precious metals as an inflation-proof store of value. Unfortunately, he found far too many gold buyers were getting swindled by big companies pushing numismatics at high markups. SchiffGold is his answer — an honest gold dealer that sells only the most liquid bullion products in the world at the lowest possible prices.