Inflation Is Eating Up Your Paycheck: Real Incomes Fall for Fourth Straight Month

The good news is you probably put a little more money in your pocket in November.

The bad news is inflation ate up all your income gains and then some.

Real personal incomes fell 0.2% in November despite a healthy gain in nominal income.

Personal income from all sources, including wages, salaries, interest dividends, rental income, unemployment, Social Security, etc. rose by 0.4% in November. Year on year, personal income is up a healthy 7.4%, according to the latest data from the Bureau of Economic Analysis today. (Keep in mind a chunk of this yearly gain came from government stimulus.)

But when you adjust for the worst inflation in 40 years, real income actually fell last month. That means you have more dollars, but you can’t buy as much with them. It was the fourth straight monthly decline in real income. Compared to a year ago, real income from all sources was up by only 1.6%.

Pulling out all of the government money, compensation from wages and salaries in November rose by 0.5% for the month. That’s good, right?

But when adjusted for inflation, total compensation fell by 0.2% in November. 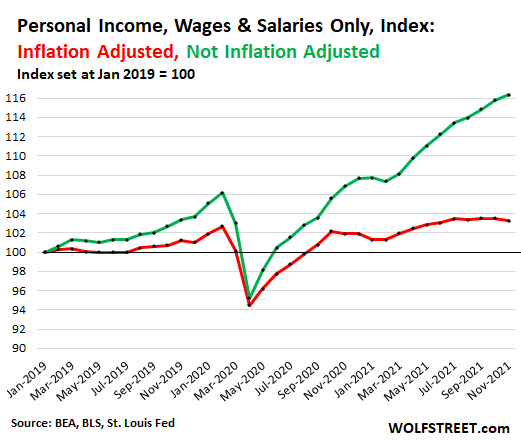 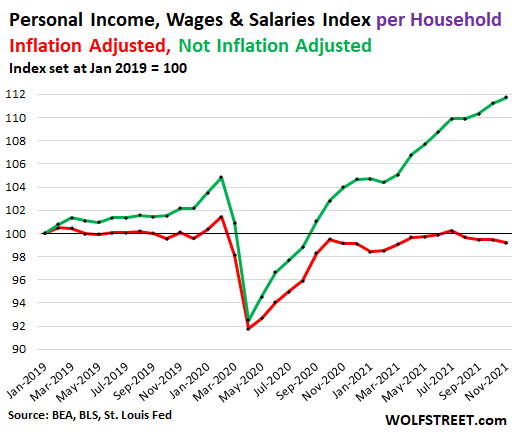 And the reality is even worse. These numbers are based on a government-rigged Consumer Price Index. Using an honest CPI, total real income is down somewhere in the neighborhood of 7.6%.

In a nutshell, Americans can’t seem to outrun the inflation dragon.

Economists and pundits talk about inflation as an academic exercise. They rarely reflect on the fact that rising prices have real impacts on real people. And if you happen to be somebody living on a fixed income or savings, you’re really screwed as inflation is rapidly eating away your purchasing power and your income streams aren’t increasing at all. Inflation always causes the most pain for the poor and elderly.

Many pundits in the mainstream blow off inflation by pointing out that wages rise along with prices. But as this data shows, wages rarely rise at the same pace as prices. That means inflation puts a significant squeeze on the pocketbook, at least in the short term.