1 hour 33 minutes ago
Revisiting An Old Premise
2 days 2 hours ago
GoldSeek Radio Nugget -- Patrick Yip: "OneGold, the Robinhood for PMs"
2 days 4 hours ago
Was That a False Breakdown in Silver?
3 days 4 hours ago
Silver Update Video: Bullish news for Silver this week as China..
3 days 10 hours ago
The Silver Chart THEY Don’t Want You to See!

Contrary to High Priest Powell, the Economy is NOT Strong

With rapt attention from all across the nation, the High Priest of Finance at the Federal Reserve took his position behind his presser pulpit. Biting his quivering lip again and again, he uttered his benediction over the US economy. He made sure to carefully speak the words I hear repeated across the nation like a mantra: “The Economy is Strong.”

It seems that, wherever I wander on my own through the concrete canyons, I keep hearing all the stock market evangelizers on Wall Street say, “The economy is strong.” I hear Goldman’s Fed acolytes say it surrounded by their Sachs of gold, but also I hear the merry band of Robinhood retail investors, who want to believe they are immortal, proclaim it out in the streets. I especially hear the televangelist economic gurus of our time who worship at the door of the Fed’s ecclesiastical temple — the Eccles Building — say it ALL THE TIME.

These are the words that keep up the spirits of mammon worshippers everywhere. They shore up the faith that maintains market sentiment into the rising fervor of a pentecostal crowd. They are calming words, reassuring words, even strengthening words — the Wall-Street equivalent of “A Mighty Fortress is Our Fed.”

Unlike the worshipping crowd, I feel nauseated every time I hear people singing that tune from a sidewalk cafe as I walk by, from a radio program playing in my car, or from High Priest Powell, himself. The cognitive dissonance between what I hear all these people saying and what I see for myself about the economy around me on Main Street causes my brain to churn like it has some kind of mental version of the stomach flu. I am sure those around me can hear and see as easily as I can what is happening in our world, so the disconnect between what they all claim to see and my own sense of reality makes me dizzy.

On what basis can anyone possibly think this is a strong economy? Look aground you, and let me point out a few ghosts, goblins and zombies that I see scattered like shadows throughout the scenery. I do it not to haunt you with woe-begotten tales fear but to reinforce what your sense of what are seeing, lest you waver in your own sense of reality and doubt your eyes as their lids start to droop under the opiate words of puppet master Powell. (All that I present is not much different for other nations right now either, so everyone can probably apply it wherever they live and maybe even multiply it to reinforce their sense of reality and their belief that they are not going insane IF they prefer reality over the hyped sentiment that pervades the wound-up world of finance.)

I’ll put it in simple bullet points to help it penetrate the fog.

Here is reality as I see it

Those are economic realities that do not look like a strong, vibrant economy. It doesn’t matter what people say the metrics are, which are so easily massaged and rigged, when you look around and see the wreckage. This economy looks more like a knee-capped old man who was knocked into a casket by COVID and is trying to crawl back out against a strong wind, and that doesn’t even consider the financial situation many nations have with bond funds and the stock market, especially the US with which I’m most familiar. I’m just talking above about the condition of the Main-Street economy where most of us work and take our leisure and its economic fundamentals.

Let’s take a look at how strong our economy is from just the first point I brought up — GDP — but let’s get real about GDP. Headline GDP is measured in dollars, so what does it matter if it appears to be rising but is not rising as fast as the dollar it is measured in is falling? That is phantom GDP growth. GDP growth is not making you or the nation richer if it is not keeping up with population growth or the declining value of the instrument used to measure it.

So, let’s take a look at real GDP.

But first, the usual headline number:

Hey, that doesn’t look too bad. Economic growth since the 2020 COVIDcrash has almost brought our nation’s total production back to where it was headed throughout the Trump years, right?

Oh, but haven’t we had a lot of inflation that I have been writing about during the last part of that recovery? How much difference does it make if we adjust GDP, measured in dollars, for inflation? Well, then the recovery of the “strong economy” looks like this:

Oh, wow! That strong economy really fell short of getting us back to the path we had been on, AND it even appears in the final quarter shown to be falling back away from that flight path. That would be because the real GDP growth rate has been lower than inflation! Imagine that! 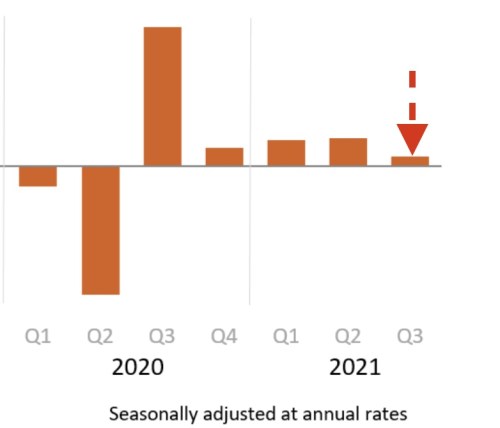 We got a big kick back up right after the crash because, as I have said, having turned the economy off with a switch, we turned it back on with a throw of the switch, but the real damage can be seen by what did not come back on. The last quarter we have in available data was kind of puny and was a big step down. That is why you see in the graph of total real GDP that the final leg of the journey on record was still rising but was no longer rising as fast as the trend in the “old economy.” That means we are not on a that that will even remotely get us back to where we should be just due to population growth and the regular improvement in business we had been seeing.

Oh, and did you think that maybe you are doing better even under this falling GDP growth rate because income has risen greatly as a result of the tight labor market? Remember population has grown and so has inflation, so look at how much of all that income growth has been eaten back out from under you by inflation. Here is how the average person was doing, how his or her situation improved as labor rates started rising and then the bite that inflation has already taken back out of that:

Those are the numbers that probably don’t keep priestly Powell up at night as much as they should. Yup, we got a rocket ride out of the last recession, and the resulting labor shortage did raise wages, but look at where the average person ended up once the inflation monkey started riding our backs in 2021. Still think an economy with some decent headline GDP is a strong economy or that inflation is not that big of a deal? Inflation has already killed more than every benefit you might have gotten out of the restart — if you got any at all and if you are the average person.

Are you starting to think that maybe the reason people are telling you “the economy is strong” is to convince you of some other reality than the one you are living. Maybe the high priest is telling the masses the opiated words they need to believe in order not to rebel … or leave the faith.

The COVID crisis gave us two years of economic crisis, its form created by how the world responded as one nation to it. That economic crisis, as we unwind the response is already becoming an economic collapse. I am writing a series right now for my Patrons called “The Everything Bubble Bust.” It will dissect the details of the economic collapse I predict we are now experiencing. Why do I have to “predict” something we are now experiencing? Because too many people don’t see it because they believe “the economy is strong.” But they will see it.

In Part 1 of “The Everything Bubble Bust,” I have laid out some clear lines of trajectory for how far the stock market will likely fall over time and where it will find strong support along the way, and what its reaction yesterday to Jerome Powell means. I will publish that Patron Post later today.