May 17, 2022 Social Credit Score? How About a Hard Money Credit Score!
August 11, 2021 This “Chartorial” Says You’re Not Wrong about Silver & Gold (SilverSeek)
November 30, 2020 A Vaccine is Coming, Sell Your Gold and Silver!
October 27, 2020 Here’s Who Wins the November Election
September 11, 2020 Pension Funds Join the Gold Party—Things Are About to Get Interesting

Does China Have Enough Gold Reserves to Launch a Gold Standard?

Russia grabs a lot of headlines right now, but the leading candidate for realistically instituting a gold standard is China.

Would China really do that? And do they have enough gold Reserves anyway?

The USA (and West) hold immense control over global trade, and one advantage of that is its ability to fund a massive military using the dollar. China wants to exert more power in the world and has global ambitions of its own, and to achieve them it needs to dethrone the dollar. It has been taking a number of steps recently to do just that—and you may be surprised to learn that gold is playing a role in it.

How much of a role and what could it do to the gold price? To answer those questions we first have to talk about China’s motivations to leave the dollar system…

Why would China, or any country for that matter, want to stop using US dollars in their trade? There are admittedly some advantages to settling trade in greenbacks, for both US and non-US countries.

There’s one big reason China and other countries are motivated to move away from US-dominated trade: the US government sometimes uses the dollar as a weapon to impose sanctions.

The obvious example is the sanctions the US just imposed on Russia, by freezing its foreign currency reserves. And last week they just blocked financial transactions involving its gold reserves. These kinds of moves are always an option since it holds the reserve currency of the world. And the foremost anti-sanction measure is to not use dollars.

When Russia was removed from the SWIFT system, some analysts deduced that while it will hurt Russia’s economy in the short term, it could have the unintended consequence of accelerating the global trend of de-dollarization.

The IMF managing director warned that Western sanctions on Russia “could backfire by making other foreign central banks more reluctant to hold such a large amount of their own foreign reserves in dollars and euros… we are likely to see some countries reconsidering how much of certain currencies they hold in their reserves.”

And Washington think tank Institute for the Analysis of Global Security said that “central banks are starting to question whether reliance on the U.S. dollar is a good idea, since the United States has been extremely trigger-happy when it comes to the use of sanctions and other economic punishments.”

Further, the move away from the dollar hasn’t been to the euro, sterling or yen; a full 25% of the shift has been into the Chinese renminbi. This is impressive considering it was only added to the IMF’s SDR basket in 2016.

And more recently, Saudi Arabia dropped the petrodollar and is not selling oil in yuan, as Mike Maloney shows here.

If this trend continues and fewer dollars are used internationally, it would have significant impacts: it would raise borrowing costs for the U.S. government, give them less leverage in foreign policy, and raise the cost of living for Americans.

Think about it: the US government can print USDs at will and build up a massive military compared to China and other countries, giving them a distinct international advantage. While American citizens may take comfort in that, someone wanting to shift the power towards themselves would want to dethrone the USD for that very reason.

The point here is that de-dollarization efforts increasingly open the door to a gold standard by a non-US country.

China is motivated to accumulate gold. And based on numerous public reports and things they’ve actually done, it seems clear they’re at least thinking about a gold standard…

This all may sound interesting and even compelling, but it raises one obvious question…

Does China Have Enough Gold for a Gold Standard?

When you drill down into the available data and look at everything happening with gold in China, you come to one inescapable conclusion: they have more than they’re reporting…

First, Western journalists measure China’s gold appetite primarily via imports through Hong Kong. If Hong Kong imports are down, then China demand must be down.

China has allowed direct gold imports into the country—other than through Hong Kong—for a number of years now. The “Hong Kong proxy” for Chinese demand is no longer accurate, and in fact can be very misleading.

None of these figures show up in Hong Kong numbers. Furthermore, China rarely releases trade data on gold, so not all of their data gets reported publicly and remains unknown. Why don’t they reveal it? It seems clear the government doesn’t want import figures tracked so that the rest of us don’t know how much they have. This move doesn't imply gold demand is down—just the opposite.

Second, China normally uses dollars when trading in oil (as part of the petrodollar system), but now is also accepting yuan. The yuan is not well established internationally yet, so as an incentive the government offers its exporters the option to convert their yuan into gold. This essentially results in a new source of gold demand in the country, one also not tracked by official import data.

Third, the Shanghai Gold Exchange is a real bullion market, in the sense that it trades primarily in physical metal (the Comex, in contrast, trades primarily in gold derivatives). It also allows immediate physical delivery on every contract. We can’t be certain, but “withdrawals” from the SGE could be a fair proxy for demand in the country.

This chart shows the cumulative amount of withdrawals from the exchange since 2008. 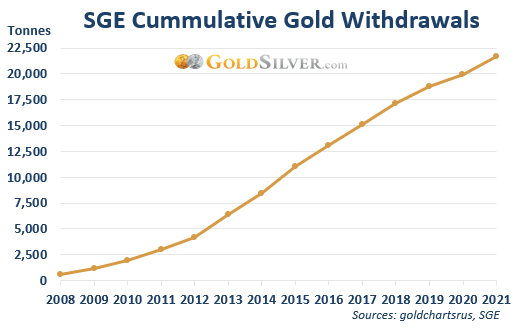 At the end of 2021, the total amount of physical gold withdrawals from the Shanghai Gold Exchange was 21,704 tonnes, roughly 690 million ounces. To put that into perspective, global gold production was approximately 113 million ounces last year.

By the way, these withdrawals reduce trading volume in North America. Why? Because China doesn’t sell, and also does not export domestic mine production, which is significant since it’s the largest gold producer in the world. Something to keep in mind.

Last, if they still don’t have enough for a gold standard, they could take the extreme step of confiscating it from their citizens. Remember, China is not a Democracy, and the banking system is not separate from the government. Gold confiscation and nationalization is nothing new in history—you can see many examples in our article on this topic.

The bottom line is that China clearly has more gold than it reports, or at a minimum could get it.

A New Standard for a Gold Standard

Many countries store gold as part of their official monetary reserves. It’s a backstop, an insurance policy against a collapse of their currency or some economic calamity.

Almost every report you'll see about gold reserves simply lists their total holdings. The US, for example, has 8,133 tonnes of gold in its Reserves, while China officially has just 1,948 tonnes.

On the surface it looks like the US is in a stronger position to go on a gold standard—but this view is misleading. That’s because of their total reserves, the US has minimal foreign currency reserves, while China has $3.4 trillion. The denominators are vastly different, relative to their total Reserves.

A more practical measure would be to compare a country’s gold reserves to its annual GDP. This would tell us how much gold would be available to support the economy in the event of a global currency crisis, or back part or all of their currency.

The following table shows the six largest holders of gold Reserves, and how much it represents of their GDP (Eurozone countries are combined into one and include the ECB). Notice how much gold China would need to reach a gold-to-GDP ratio of 2% (gold row).

If the Chinese government has, or acquires, 6,000 tonnes of gold, it would have the same amount relative to their GDP as the United States.

This would put them on par with the top gold holders around the world. Either way, this is probably a more realistic gauge of how they might determine their reserve goals. And if they’re intent on a gold standard it might give them enough to impose at least a partial one.

There would be other options, too. China could combine their currency with other countries to form a gold standard, which means they wouldn’t necessarily need to back their currency 100%. Or team up with the IMF, who originally planned to have SDRs convertible to gold.

Will the Red Dragon Someday Be Made of Gold?

It seems clear that with China’s long standing interest in gold, and its ongoing attempts to remove themselves from the US dollar system, that they will want more gold—probably a lot more—in their Reserves. Even some mainstream economists have publicly stated that China’s current level of gold holdings is too low, given the size of its economy and the growing significance of its currency.

So, is China stockpiling that gold now? Is that where some of the untracked bullion is going?

My answer to those questions is an unequivocal yes. I say that because that’s exactly what they did before. China announced a 75.6% increase in their gold Reserves out of the blue in 2009—did they suddenly just buy all that, or is it more likely they’d been accumulating all along and then decided they wanted to make the announcement? Given the level of secrecy in many areas of their society, the latter is almost certainly the case.

We don’t know exactly what China’s plans may be, but it would not be surprising in the least if they’re preparing now to pounce at the next crisis, particularly a monetary one. Even if that doesn’t include a gold standard it would undoubtedly be a fireworks-type event for the gold price.

For us investors it is certainly not necessary for China to launch a gold standard. And it may not happen.

But if a monetary crisis gets bad enough, a brave new world that includes a gold standard could become a growing possibility.

As many of you know, we pride ourselves on the education we provide, everything from Mike Maloney’s Hidden Secrets of Money series and regular video updates, to our Getting Started encyclopedia and Insider’s program. When you buy from GoldSilver you help fund the costs of this research and education, which we offer for free and think stands head and shoulders above what is available elsewhere in the industry.

The following is another example of the kind of in-depth research your efforts help fund. Jeff’s report on the state of the Chinese gold market below is something you probably won’t find in mainstream reporting. The message is insightful, and we hope you find it useful. We appreciate you buying from GoldSilver.com to support our ongoing educational efforts.

An accomplished analyst, author, and speaker, Jeff Clark is a globally recognized authority on precious metals. The son of an award-winning gold panner, with family-owned mining claims in California, Arizona, and Nevada, Jeff has deep roots in the industry. An active investor, with a love of writing, Jeff eventually became a mining industry analyst, including 10 years as senior editor for the world-renowned publication BIG GOLD. Jeff has been a regular conference speaker, including at Cambridge House and Sprott Resources events, the Silver Summit, and many others. He currently serves on the board at Strategic Wealth Preservation, a bullion storage facility in Grand Cayman, and provides analysis and market commentary for GoldSilver.com.