Federal bureaucrats use proxies to stifle all kinds of activities they don’t like. The “Twitter Files” are revealing this tactic to a new wave of Americans, but it has been around a long time.

The bureaucratic assault on the First Amendment is part of a larger movement to end personal liberty. The ultimate goal may be to assume financial control over the populace through implementation of a central bank digital currency (CBDC).

If officials can replace the existing currencies with digital, programmable money, they will claim the power to dictate if, when, and where individuals can spend money as well as what they can spend it on.

Those who question whether forces inside the federal government are actually pursuing such power may wish to review recent history around the Federal Reserve note "dollar."

The effort to control people by targeting their money escalated in 1970 with the Bank Secrecy Act. It targeted cash specifically by requiring banks to report transactions involving more than $10,000. 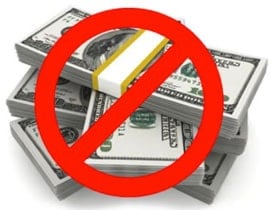 Officials seized the opportunity to demand even more reporting in the aftermath of 9/11. The misnamed “Patriot Act” required all merchants (not just banks) to file a Form 8300 on transactions of $10,000 or more. They also required merchants to file an Orwellian “Suspicious Activity Report” on any transaction the merchant judged to be “suspicious.”

Then the Obama Department of Justice launched Operation Choke Point in 2013.

Regulators threatened banks with increased scrutiny, controls, and penalties if they did business with certain companies deemed by the Department to be at higher risk for money laundering and fraud.

In 2017, the FDIC settled a series of lawsuits by promising to cease making informal and unwritten “suggestions” about who banks should be doing business with.

However, banks and financial services providers continue to cancel clients with the audacity to operate disfavored businesses or voice unapproved views.

Chase said, "We decided to close your credit cards on September 18, 2021 because continuing the relationship creates possible reputational risk to our company."

The bank later reversed the decision amidst a backlash from conservatives.

PayPal recently went so far as to insert a provision in their terms of service which allowed the company to charge clients up to $2,500 if, at PayPal’s sole discretion, they were spreading “misinformation.” The company also reversed course after the story went viral and many clients decided to dump the woke company.

Couple these sorts of stories with the release of the Twitter files, and one should expect to find that bureaucrats are using backchannel communications with banks to push their anti-liberty agenda.

Stopping “misinformation” and controlling the narrative certainly isn’t all the administrative state hopes to achieve. It is one means to an even more ominous end.

The Federal Reserve is openly developing a digital currency. It’s part of a long-running globalist agenda to curtail financial privacy and increase control over people.

Those who accumulate, tangible non-government money like gold and silver are sidestepping the elite’s growing obsession with achieving total financial control.