January 20, 2023 Could Golden Ruble 3.0 Knock Out the U.S. Dollar
January 19, 2023 Gold drops like a Rock When People Trust the System. Gold Shoots like a Rocket when People Don't.
December 27, 2022 Feds Best Bet to Kill Inflation. Just Kill People.
December 22, 2022 NFT Insanity: No One Should Be This Stupid!
December 13, 2022 The Transition to Net Zero was Planned with Zero Brain Cells

We live in times where The Joe Rogan Experience is more popular than CNN. This says a lot.

We have one man and a microphone kicking the crap out of a media conglomerate. People trust a dude who’s winging it more than scripted and slick newsrooms.

Trust in government officials and the products they promote is collapsing. One of their worst products is the dishonest paper version of the dollar.

But the Federal Reserve note “dollar” is ONLY backed by the U.S. government's full “faith and credit.” It’s a debt instrument which, in effect, is everyone else's liability.

Through sleight of hand, 20th century central bankers first passed their “dollar” notes into circulation… and then pulled the sound money out. The final act was President Richard Nixon’s “temporary suspension” of gold convertibility in 1971.

This is why we use terms like “honest money.” It’s precisely because unbacked currencies, by design, are fraudulent.

Some financial terms are misrepresented by mainstream media that pulls their news copy from Washington-sourced press releases.

A Growing Economy Does Not Necessarily Equate to Prosperity

People grow up believing that the U.S. thrives because its gross domestic product (GDP) is higher than in other nations. The components of the GDP are consumption, investment, government spending, exports, and imports.

When federal projects like a war in Afghanistan cost five times more than Vietnam, all those salaries and weapons get counted in the GDP. (Remember what happened in Afghanistan? After 20 years, we replaced the Taliban with the Taliban.)

If we have a federal project to build 20 pyramids and the next president orders them to be removed, all the effort in constructing and destroying those pyramids count in the GDP.

It sounds ludicrous, but we have a horde of conflicting, confusing, and overlapping bureaucracies whose activities are largely unproductive.

Remember hearing how the Orwellian-named “Inflation Reduction Act” funds the hiring of 87,000 more IRS agents? Their salaries are part of the GDP. But does it make us more prosperous?

And when GDP growth isn’t adjusted to account the true rate of inflation, that’s not real growth either. 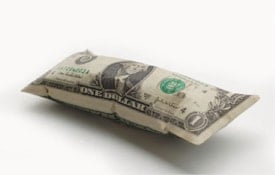 Meanwhile, the recent attempt to redefine the meaning of the word “recession” is another dishonest act.

The term “inflation,” however, is especially misunderstood because people are led to believe that it's "rising prices" instead of an intentional government policy of debasement.

While trying to put energy producers out of business, President Biden has been draining the Strategic Petroleum Reserve to put a lid on oil prices before the midterm elections.

But what happens when this draw-down ends and can no longer help ease the public’s pain? Oil prices will soar further. And the cost of oil is the predominant variable in the price of nearly everything.

The way the government measures the effects of inflation is flawed to begin with. The basket of goods that go into the government’s CPI statistic is cherry-picked.

But no matter it’s measured, no one can deny costs are soaring any longer.

Our government abandoned the gold standard because a constrained monetary system would create pressure for balanced budgets. It’s more politically convenient to look to the Fed than to cut federal spending or raise taxes.

But when the Fed creates new currency units and adds them to the trillions already in circulation, it steals value from the existing pool. The politically connected are the first ones at the trough. Savers and consumers aren’t invited to partake... and instead foot the bill.

The truth is, as Milton Friedman once said:

"Inflation is always and everywhere a monetary phenomenon, in the sense that it cannot occur without a more rapid increase in the quantity of money than in output." 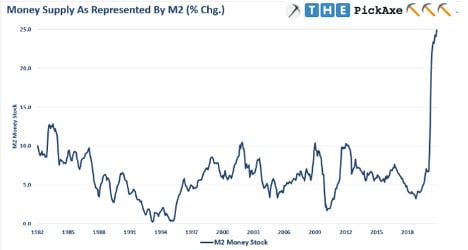 I recently spoke with a pizza restaurant owner in Pittsburgh, a mom in San Diego, and a gas station operator in New Mexico; all their stories were eerily similar. They are suffering from intensifying inflation.

The sad thing is they are kept in darkness as to how inflation became the ferocious beast that now wreaks havoc in their daily lives.

A return to sound money is the path out of the darkness.