January 20, 2022 Stocks and Awe: The Federal Reserve Regime Change is Here!
January 10, 2022 How Bad Is the Stock Market Route Now, and How Bad Will its Collapse Get?
January 06, 2022 Media Slavishly Praise Strong Jobs Market as Being Saved by Vaccines
January 05, 2022 Bonds Buckle, Top Stocks Stink
December 05, 2021 The “Damned Lies” that Unemployment Tells

Food Shortages Punching the Populace in the Gut; No Bubble Here, Folks! 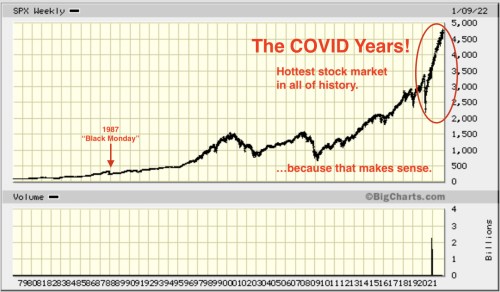 Anyone see a bubble anywhere? This is short and sweet because the picture says it all: We’ve just seen the fastest, highest rocket ride in stocks in the history of the world! Because that makes sense during a time of global plague and global economic lockdowns, creating extreme labor shortages, resulting in extreme product and materials shortages because 10% of the labor force has quit for good or been fired under the Biden Mandates. The present stock-market bubble makes the 1987 crash look like a pimple on the flank of the Himalayas! Anyone see where Mount Everest is in that picture? What could possibly go wrong??? But, hey, this is NOT a bubble created from Fed money laundering — uh, I mean printing, uh, I mean keystroking! If you believe that, you fully deserve everything that happens to you when the bubble bursts!

Food Shortages Punching the Populace in the Gut 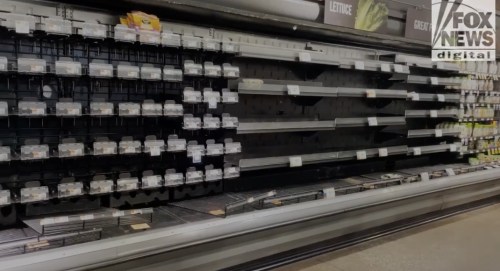 With CPI hitting a 40-year high today, as economists anticipated it would, inflation has shown us it is going to keep getting worse. People in some areas of the nation are already alarmed about food shortages. Prices are rising as shelves go empty. So are tempers.

“This morning’s CPI read really only solidifies what we already know: Consumer wallets are feeling pricing pressures and in turn the Fed has signaled a more hawkish approach. But the question remains if the Fed will pick up the pace given inflation is seemingly here to stay, at least in the medium-term,'”said Mike Loewengart, managing director for investment strategy at E-Trade. “With Covid cases continuing to rise, the impact on the supply chain and labor shortages could persist, which only fuels higher prices….”

A shortage of workers has led to clogged supply chains and empty store shelves. Though there are signs the omicron variant cases could peak soon, lingering Covid issues combined with cold weather in the Northeast point ‘to renewed upward pressure on food prices,’ wrote Paul Ashworth, chief U.S. economist at Capital Economics.

In fact, food prices look like they will take a big leap up in January, as this becomes the first month in which eye-popping shortages have started to show up in some parts of the country because of an exploding worker shortage due to the Biden Mandates kicking in at the same time Omicron is putting all kinds of people out on sick leave for a couple of weeks.

That has become literally a one-two punch to the gut as it has added to the supply shortage in grocery stores that had only begun to appear in December. The occasional empty shelves in December could have been mostly due to holiday shopping and holiday meals back, so I didn’t write anything about it to avoid being alarmist, but it is clearly not that now, especially in groceries:

I think we’re about to have a food shortage.

Very little meat, and whatever meat is in there is super-high priced … extreme little produce. It’s kinda scary.

All of a sudden things disappearing…. You need to do something about it…. They need to hurry up and get it straightened up because people gonna be starvin’. They gonna be starvin’ out here…. It’s gonna get rough here.

With people starting to panic, as you see in the video in those areas where suddenly it is difficult to get food nearly citywide, prices can only be restrained by price-gouging laws; but stores are already saying they have to raise prices as a way to ration the goods that are fleeing out the door. It takes a huge raise in prices to keep people from buying all they need to eat. Think about how much extra you would pay if not paying it means you don’t replenish the kitchen for the next couple of weeks.

Some are ready for this — perhaps even because of recommendations I gave months ago for building up stores of non-perishable goods that you normally buy. Even those stores can run out quickly. I know I’ve followed my own advise of buying twice as much of everything we get and storing half away with each purchase for the last couple of month, but it won’t take long to blow through that. Still, if you took the warning, you have a cushion if these shortages hit where you live. (So far, I have not seen them where I live.)

If the situation spreads, as seems likely, given the huge labor crisis that Biden has worsened considerably, January will see a lot of upward pressure on food prices. That situation can grow rapidly into extreme panic because it is happening in cities like Washington, D.C., where in just another week’s time millions of people could be clawing to get food that is not replenishing itself on shelves if something doesn’t turn the labor crisis around immediately. Fortunately, many of us have a little fat to burn, but we don’t like burning it.

You could easily wind up seeing the government having to use the National Guard (again, just as it started doing last month in hospitals) to move food into major cities quickly enough. Because grocery stores blow through a lot of merchandise rapidly, you could see a huge worsening of this into a crisis in just a week or two.

That is exactly the kind of environment I’m talking about where, if things go bad for the stock or bond markets during the Fed’s taper, the Fed will have NO room to retreat from its taper because of all the political pressure over soaring inflation at a level that is literally punching the populace in the gut.

Trending hashtag where people are posting their own photos of empty store shelves in their area. You can, too: #EmptyShelvesBiden.

So much for “build back better.” So, while you’re at it, how about we start another trending tag right here: #GoBrokeBiden.

Post anything that isn’t an empty shelf (or that, too, using both hashtags if it is an empty-shelf situation) on Twitter at #GoBrokeBiden using that hashtag if it is related to labor shortages made worse by the BMs (Biden Mandates) or your own personal story that resulted from being terminated over the vaccines or other economic woes you actually see that are clearly made worse by Biden’s actions, etc.

I told you this site would also be wherever possible a site for coordinated action to “beat the establishment,” as says my Patreon motto. This is a small and simple step. Help it grow. Post your content on Twitter, your images and stories and tag them and share them and share this article while you’re at it. Keeping it personal will make it potent against a potus who is impotent. 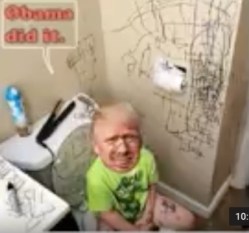 So, roast his shriveled little coals. Let’s let him be the next president to be identified with the equivalent of Hoovervilles because we are going to start seeing those again, too. (And if Trump were still in office, yes, I’d be holding him out to dangle his orange little coals over the fire, as well.) If the politicians take the heat, the Fed will get the heat. They’re all in it together, and they all want to blame the one who came before them; so, don’t buy into the one-party-will-save-us garbage. Joe isn’t going to save you any more than Trump did, any more than Obama did. None of them will save you. They serve themselves by serving the rich; so, start the bonfire and start roasting just because they deserve it! And spread the word. Let’s start a Twitterstorm … at least, until Twitter pulls it all down in censorship under Biden’s next big BM.