Long-time readers of The Gold Update may remember this quip per a metro station billboard: "A Lot Can Happen Between 9 and 5" --[The San Francisco Examiner, circa 1980s].

And 'tis perfectly apropos to that which was written in Friday's Prescient Commentary quite early on in the trading session: "...Gold has slipped below its September low to 1621..." because a lot then happened over the ensuing hours. From that Friday low, Gold marched right up road to as high as 1663, indeed settling the week there. Through this year's 203 trading days-to-date, yesterday's +42 low-to-high run was Gold's 11th-best such intra-day rise, and 'twas enough to turn a losing week into a net gainer of +12 points. Not that exciting, but we're wavin' the Gold flag as best we can, with a tip of the cap to Friday's buyers.

'Course when the Dollar is putting in a moderate down day whilst amongst the five primary BEGOS Markets the €uro and S&P 500 are on the rise, then Gold too goes up as their positive correlation continues. Here are the percentage tracks of the BEGOS components from one month (21 trading days) ago-to-date with the €uro, S&P and Gold directionally as tight as a drum: 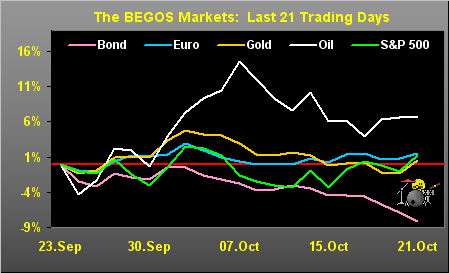 And specific to Gold for you technical analysts out there, per the website's "Gold" page, the yellow metal's best study at present is its eight-hour moving average convergence divergence (MACD).

(Spot on cue is our Squire). Well, since you asked: Gold's eight-hour MACD has confirmed 10 crossover triggers (Long-Short-Long-Short etc.) since 18 July; purely swinging on the MACD would have produced six gains and four losses, the average gain being $3,963/cac and the average loss being $1,968/cac; thus saving you the math, the gross gain (ex- slippage and commission) comes to $15,910/cac across those 69 trading days with an median signal duration of eight days, four hours. Hindsight is a beautiful thing. However as any seasoned investor and/or trader knows, perfection can come to a screeching halt: you thus remain on your own out there. But for the moment per the below graphic, such study just flipped to Long per Friday's 1663 settle: 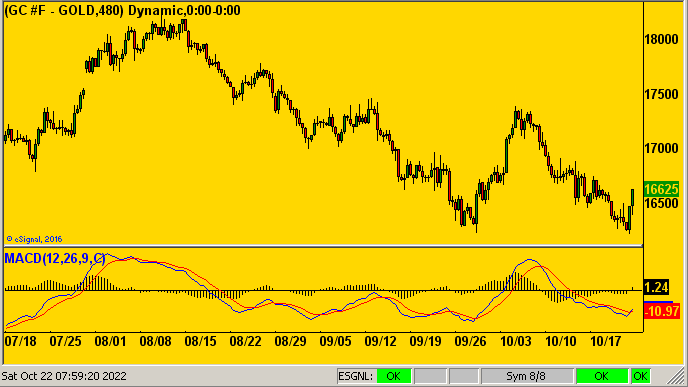 Still, such near-term Long signal falls within the guise of the broader weekly parabolic signal which now entering its seventh week remains Short. Note that the price to flip such trend from Short back to Long is better than 100 points above the present 1663 level at 1771; (for those of you scoring at home, Gold's "expected weekly trading range" is now 58 points). Here's the graphic: 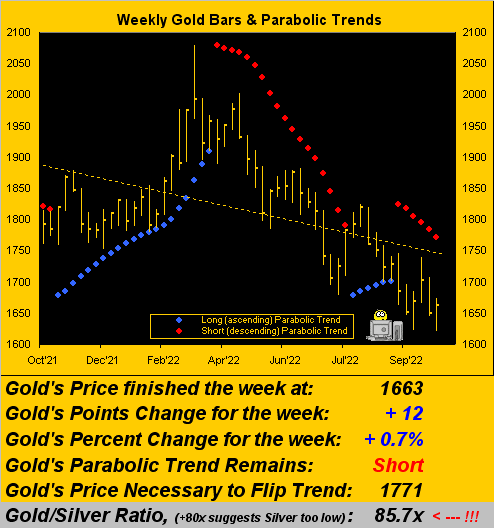 Then too is the issue of declining Gold contact volume (as we'd detailed across recent years in our 01 October missive). More immediately, Gold's volume remains rather diminished: for the first 15 trading days in October 2020, Gold's COMEX contract volume totaled 3.0M; in 2021 those first 15 October days totaled 2.7M; now through 15 October trading days in 2022 the total is less yet again to 2.6M. Friday's buyers may have revived Gold from its dive, however the real muscle still ain't there. 'Tis hard to go higher without more buyers. And shall come the day when the purported paper price suppressors are themselves suppressed, even as interest rates continue to rise. Remember: from 2004 through 2006, the FedFundsRate rose from 0.50% to 5.25% whilst Gold rose +59% from 402 to 639; (for the same stint the Dollar Index only sagged a scant -4%). Bottom line, when Gold goes, its GOES! And per today's opening Scoreboard valuation of 3933, there's a tonne of going in the offing.

Indeed 'tis the battle of the technicals, Squire. That positive MACD study is suggestive of follow-through toward 1700; the parabolic study (as readers by now well know) is suggestive of follow-through sub-1600. The hint many lie (perfect double-entendre) in the direction of the S&P, unless their ongoing positive correlation finally begins to break apart (which historically it always does). Let's check the S&P:

It had quite the rally yesterday, the +2.4% gain ranking 15th-best thus far this year. Indeed so great was the S&P's gain that it put the "live" price/earnings ratio up to 34.0x, reflective in turn of this (so far) lackluster Q3 Earnings Season.

"What do you mean 'lackluster', mmb? 77% of S&P earnings have beaten estimates!"

(Squire loves teein' 'em up like this). Truth be told, of the 83 S&P 500 constituents having reported Q3 earnings, just 53% actually bettered their bottom lines over COVID-affected earnings of a year ago. Not much improvement there essentially without the COVID burdens. Oh to be sure, the S&P has now bounced thrice from the widely (finally) recognized 3600 support level. That's technical. Historically, a 34.0x P/E ratio is unsustainable in a positive interest rate environment. That's fundamental. Thus for Gold, should the S&P fold and the positive correlation remain in vogue, then Gold also works further down its road, (as would the €uro given renewed "Dollar strength"). As to how bold may be the S&P, if you're a fan of Leonardo Bigollo Pisano Fibonacci, with price at present 3753, something just north of 3800 we may see before the next downward "Wheeeee.....", for quite the roller coaster has become the S&P. 'Tis here in the Baro as you see: 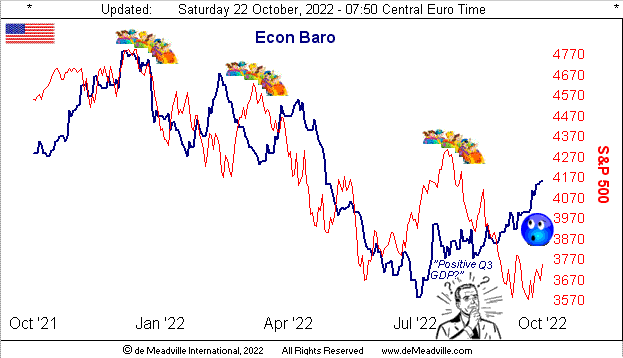 Note the chap in the graphic querying "Positive Q3 GDP?" As we come to the tail-end of Q3’s incoming metrics for the Economic Barometer, this past week for September data saw month-over month improvements for Industrial Production, Capacity Utilization, and Building Permits for homes. 'Course on the stinker side, declines were recorded for actual Housing Starts, Existing Home Sales and the Conference Board's lagging indicator of Leading Indicators. But on balance, the Econ Baro clearly is on the rise: and in the balance come Thursday (27 October) is our first peek at Q3 Gross Domestic Product. On verra...

Meanwhile this past Wednesday came the Federal Reserve's Tan Tome, wherein 'tis expected the StateSide economy shall weaken. Moreover, from "The Last to Figure It Out Dept.", per Dow Jones Newswires, going into next year "Economists Now Expect a Recession". Again we ask: where were they during the first two quarters of this year? Talk about swimmin' in da Nile...

Elsewhere, the U.K.'s P.M. Truss has opted for the outbound bus, (who can blame the youngster). After all, mandate follow-through or otherwise, 'tis tough to preside when both Standard & Poor's and Fitch have dropped your empire's credit outlook to "negative".

Meanwhile 'round the other side of the world, apparently there's a drying-up of Chinese economic data, suggestive that all is not tickety-boo in the great dragon's milieu. Who knew?

What we do know is that Friday's Gold buyers boosted price sufficiently so as to shift the key 21-day linear regression trend into neutral. 'Tis depicted below left in the three-month view of daily bars per the baby blue dots having stalled on their 0% axis. And thus below right we find price (1663) at the center of its 10-day Market Profile, the trading support and resistance levels as labeled: 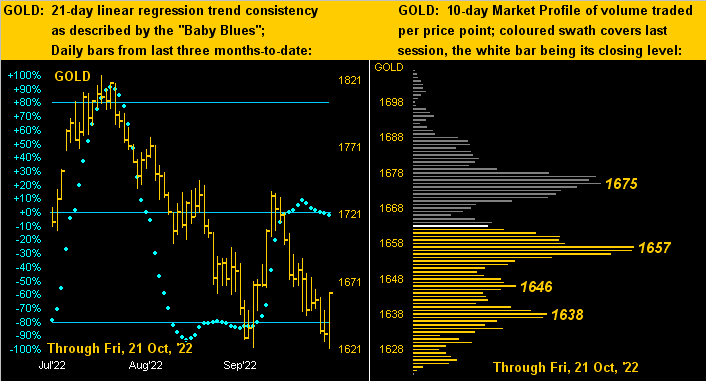 For Silver, her picture is directionally the same as 'tis for Gold, albeit with far more volatility by amplitude across her daily bars at left; in her Market Profile at right, Sister Silver (at present 19.40) is pinched in there between immediate resistance but broader support near-term: 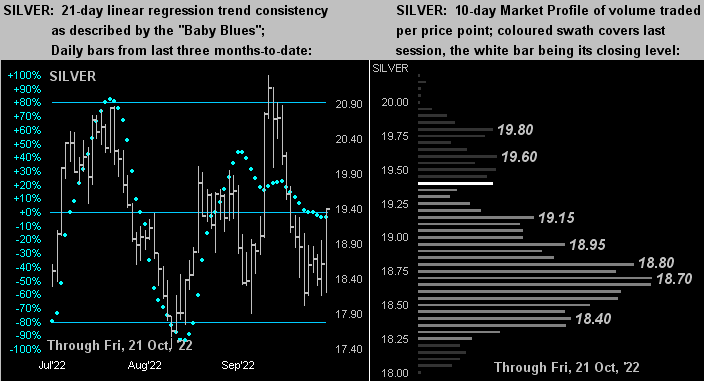 We'll wrap it here from the "How Does This Happen? Dept." 'Twas widely just reported that the StateSide Strategic Petroleum Reserve has been depleted to a 38-year low, (or per the venerable Reuters, 37 years ... but who's counting). The U.S. is the largest oil-producing nation globally. Followed closely by Russia and Saudi Arabia, these Top Three account for 40% of worldwide oil production. So why is it there isn't any left in the States? Just asking... Moreover from the "You Need It When You Most Hate It Dept.", did you hear about the group which this past Thursday glued themselves to the floor at the Porsche exhibit up there in Wolfsburg? The rescue squad sent in to de-glue them had to resort to implementing materially oil-based acetone. YeeeOUCH! And yet should any of these bright bulbs grow into adulthood, perhaps one or two (albeit a real stretch) may become money managers ... yours perhaps? Don't you get stuck: get some Gold before you run out of luck!