September 25, 2022 Gold Miners Watch the "Last Inflated Man Standing" Startto Fail
September 18, 2022 The Purple Pill
September 11, 2022 The “Best of Times” for Gold (and the Miners That Leverage It)
August 28, 2022 Stock Market Assigns More Power to the Fed Than Gold Bugs Do
August 12, 2022 Gold Is About Value; The Miners Are a Speculation Upon 'Value'

20 hours 50 minutes ago
The Euro in Huge TROUBLE | Will Gold & Silver See Their Day? - Peter Krauth
2 days 8 hours ago
GoldSeek Radio -- Bill Murphy: After 12 years of frenzy, modern investors are blissfully unaware...
3 days ago
Housing Crash Around The Corner? When Will Gold & Silver Take Off? - Adam Taggart & Economic Ninja
4 days 21 hours ago
COT Silver Report - September 23, 2022
5 days 10 hours ago
Silver From Comex Depleting! Where is The Silver Going? 🚨 - Ed Steer

It has been a classic washout in the gold stock sector, but if positioned correctly opportunity is setting up

So here we are, intact. That goes for me personally and for NFTRH subscribers who agreed with the analysis.

What have you done for me lately, smart guy? Err, not much. There has been a lot of waiting, biding time, trading other areas and sitting on cash; a high percentage of it.

Gold bug herds, AKA less experienced or analytically critical precious metals bulls, are currently running that way, over that cliff over there. They have been herding since August 2020, when we first noted the danger. Such events climaxed in 2008 and 2020 too. In each of those instances a crash took place and it coincided with fundamentals slamming into place. Crashing gold stocks + ramping fundamentals = big time buy opportunity.

As noted in the first bullet point above, the fundamentals have not slammed into place on this cycle. They are grinding into place, slowly and outside the limits of the average market participant’s patience. But that is exactly why contrarian investing is so difficult. It is very hard to have patience when time takes what it takes for an opportunity to play out, especially when your viewpoint is not reinforced by a majority.

So that is the background. We have been more than prepared in managing risk. That is how markets often go… manage risk > manage risk some more > manage risk for so long you almost lose sight – in real time – of why you’re there and what your job is > and then PREPARE TO CAPITALIZE. Again, I am satisfied that NFTRH has done this job well. Not perfectly; but very well.

Intact players should now be considering the big sentiment event on tap for next week as the Fed, which was jerked kicking and screaming into hawk mode by the bond market, prepares to render its big decision (on July 27 they will either hike the Fed Funds by .75% per 71% of CME traders or 1% per 29% of CME traders).

Meanwhile, the Gold Bugs index is tanking toward a higher low to the 2018 low, which is really all it needs to do to keep the volatile series of higher highs and higher lows (AKA a bull market) intact.

We use shorter-term charts and of course the ‘macro’ and sector fundamentals and sentiment to fine tune the situation in NFTRH reports and updates. But this general monthly chart picture should not only cause no concern for would-be buyers who are well prepared; it should stimulate greed while a majority of bugs are gripped in fear. 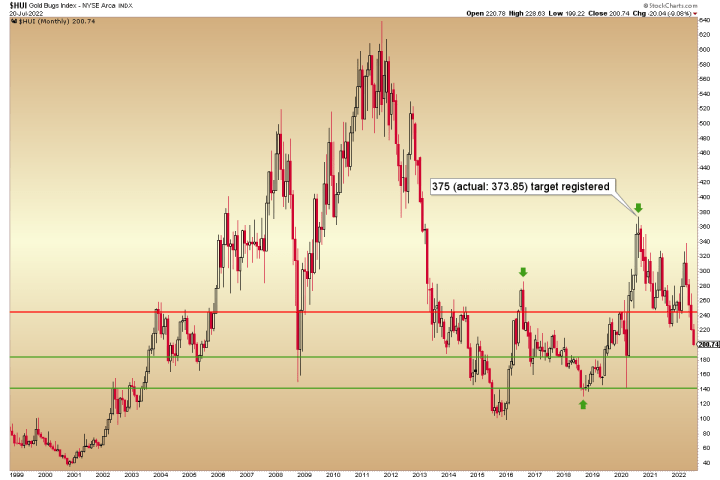