Making such an absolute statement may sound bold; even arrogant to some. There is, however, perfectly sound fundamental reasoning underlying the claim. So before you dismiss it out of hand, hear me out.

GOLD IS THE ORIGINAL MEASURE OF VALUE

Before paper currencies, people used gold as money. Everything was priced according to ounces and fractional units of gold. People used gold the way we use fiat currencies (dollars, yen, euros, etc.).

Gold’s value is in its use as money. The supply of gold is limited and stable, with little variation over the centuries. Gold is a long-term store of value and its value remains constant.

IF GOLD’S VALUE IS CONSTANT, WHY DOES ITS PRICE CHANGE?

International gold trades are settled in U.S. dollars. The U.S. dollar is the world’s reserve currency. Gold is priced in dollars because the United States convinced other countries that the U.S. dollar was “as good as gold”.

There was at one time a fixed ratio of dollars to gold ($20 U.S. to 1 oz of gold). After finally admitting (sort of) that they had created too many dollars to maintain that ratio of convertibility, the U.S. reneged on its promise to exchange its gold for the cheaper dollars that it had put into circulation worldwide.

Without convertibility and with no limits to restrain government, the supply of dollars continues to grow at an alarming rate.

The “new money” cheapens the value of all the money (dollars) in circulation. This leads to a loss in purchasing power which results in — higher prices. This is why it continues to cost more and more for the things we buy.

The higher prices resulting from the loss in purchasing power are not inflation. Inflation is the conscious action of governments and central banks to expand the supply of money and credit. The higher prices are an effect of inflation.

ANTICIPATION IS MAKING ME WAIT

Some of those who own gold think it will make them rich. They patiently wait for the moonshot that will take them for the ride of their life. They mistakenly believe that fabulously higher gold prices will bring them wealth untold.

The wealth story will remain untold. Owning gold will protect your wealth over long periods of time. Gold is a long-term store of value; but, it cannot and will not make you richer than you are.

(Short-term trading and speculation may provide profit opportunities from time to time, but they have nothing to do with fundamental investing – see Understanding Profit Potential In Gold)

There are also times when the price of gold can go down, sometimes dramatically so; and for long periods. This has nothing to do with gold and everything to do with the U.S. dollar. (see Not About Gold – All About the Dollar)

In addition, there are periods of time when the gold price appears to outpace inflation. Those periods occur only after gold has seemed to ignore those effects for several years.

For example, after gold peaked in 1980, its price declined for many years. Inflation hadn’t stopped, and its effects continued to take their toll on U.S. dollar purchasing power.

The extent of gold’s price increase from 2001-2011 was disproportionate to the effects of inflation occurring over that time. That is because gold was playing catch up.

In 2011, the nominal gold price reached equilibrium with its inflation-adjusted value. A similar pattern developed between 2015-20. Both of these periods are shown in the chart below… 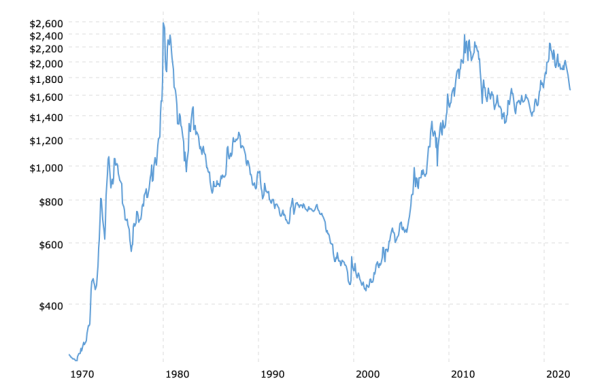 In the past fifty years there have been three distinct periods when the price of gold rose in sustained fashion: 1970-80; 2001-11; 2015-20. Each of those periods resulted in a peak price for gold that represented the full effects of inflation that had occurred up to that point.

When the gold price peaked above $2000 in August 2011 and again earlier this year, it represented a ninety-nine percent decline in U.S. dollar purchasing power over the past century.

Currently, the U.S. dollar is strong and that trend may continue for some time. As long as it does or for as long as the U.S. dollar maintains stability, there cannot be new highs in the gold price.

Gold is not forward-looking. The higher price of gold over time reflects the actual effects of inflation that have already shown up in the loss of purchasing power (higher prices of goods and services) in the U.S. dollar.

New highs can occur only after a longer period of sustained U.S. dollar weakness resulting in a further loss of purchasing power. (also see Gold Gains In Price Only – Not In Value)