Gold Is the Most Stable Currency in the Long-Term

If gold didn’t retain its purchasing power, why would long-term investors and central banks store it in their vaults for decades? Hardly is gold used for industrial applications, so, again, why hold large stocks of gold if it would lose its value over time? The truth is that gold retains its value, and the stability of gold’s purchasing power in the long-term is the main reason to own it.

On August 21, 2020, precious metals consultancy firm CPM Group released a video on Youtube, which shows that in the long-term gold’s value declines. I will not go into every detail of the video, but its core message is that gold’s purchasing power always decreases. “Just like every other currency,” CPM Group states. In the video a chart is displayed of the real gold price in the U.K. from 1700 until 2011 (“real” means corrected for inflation). As you can see below the real gold price shows a declining trend in their chart. 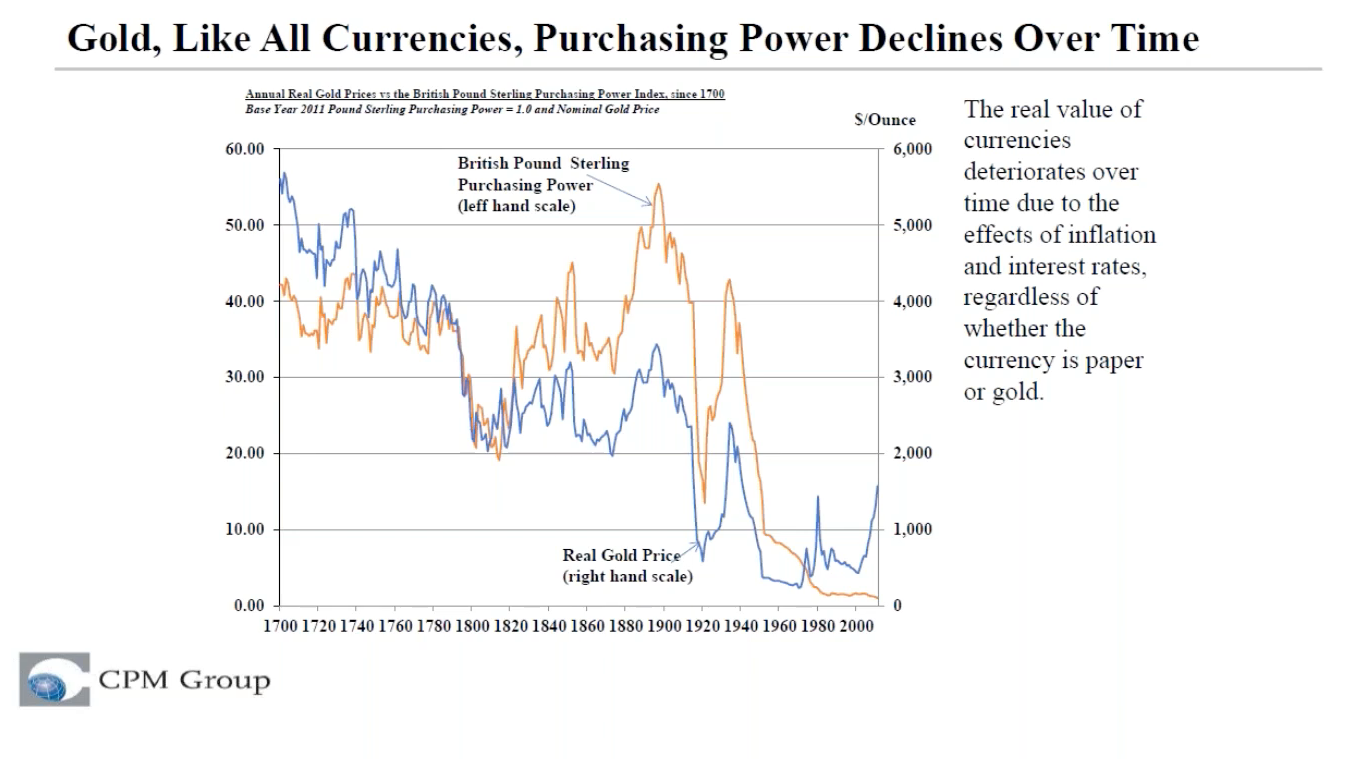 CPM Group notes their data is sourced from a book called The Golden Constant, written by Professor Roy Jastram. This book happens to be in my possession, and my historical data sheets on gold’s purchasing power are also based on Jastram’s figures. But I won’t show you a chart conceived by me. Below is a chart from the book itself. We can see two indices:

1) An index of gold's purchasing power for consumer goods, starting in 1800. The base year for the index is 1930, which means that every data point in the chart is a comparison to gold’s purchasing power in 1930.

2) An index of gold's purchasing power for wholesale goods (commodities), starting in 1560. The base year for this index is 1930, too. 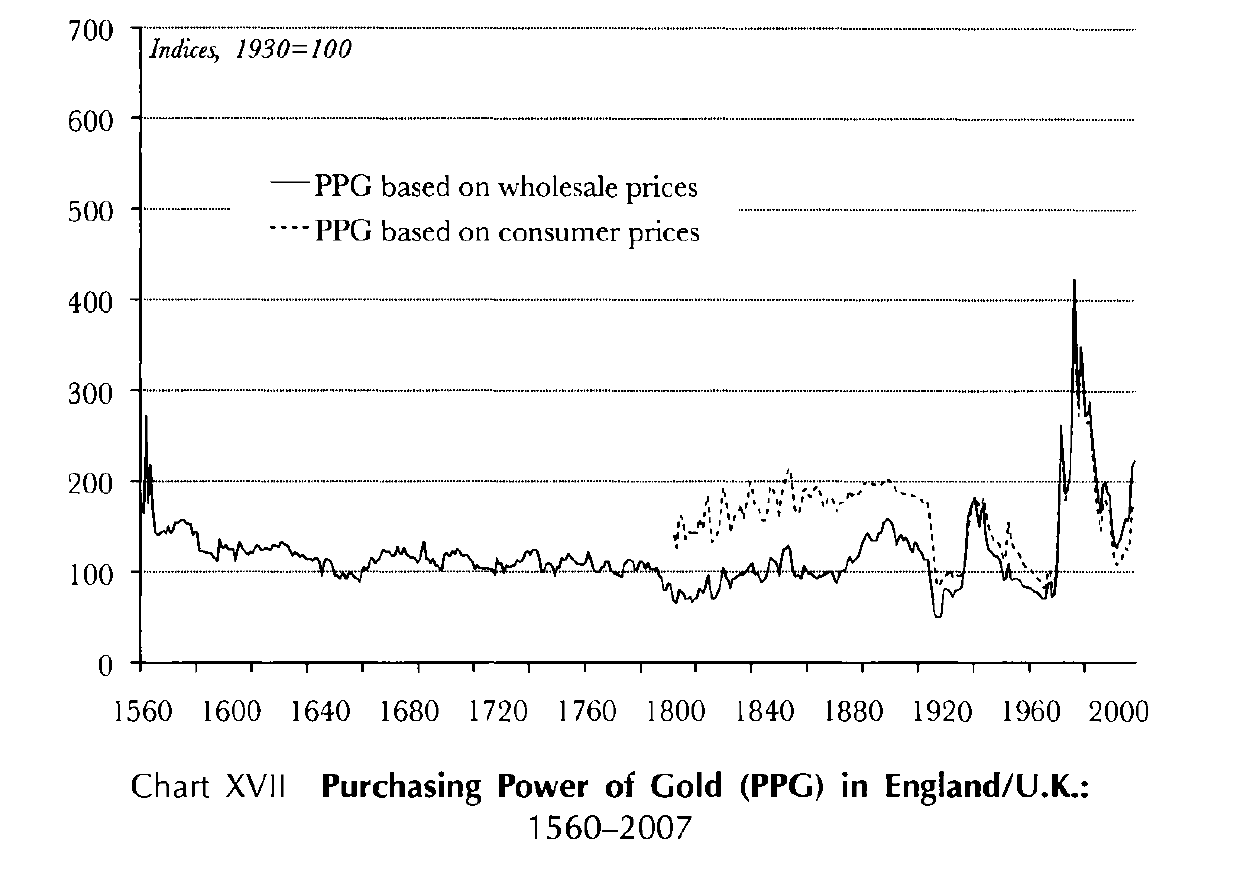 As you can see gold’s purchasing power doesn’t decline over time.

Although, Jastram uses an index and CPM Group the real gold price, both boil down to the same thing. Both approaches show a trend (decreasing, constant, or increasing). Strangely, the chart by CPM Group shows a declining trend, while Jastram shows gold’s purchasing power is roughly constant over time.

I think CPM group made an error in their calculations, because not only in Jastram’s book, in many other books gold’s purchasing power in the long-term shows to be roughly stable as well. Nothing in economics is perfectly constant, because supply and demand for every tradable item continuously fluctuates versus other items.

On the classic gold standard, which lasted until 1914, gold was officially money and thus the unit of account. In such a monetary system gold’s stability was self-regulated. Simplified, when gold miners would increase output—to literally make money—the money supply increased and prices of consumer goods would rise. When prices would rise, gold’s purchasing power fell. This would incentivize people to cease mining gold, and shift to the production of consumer goods that could be sold for elevated prices. Eventually, this shift would cause prices of consumer goods to decline and increase gold’s purchasing power. So, people would get back mining gold, and cycle would repeat. This system stabilized gold’s purchasing power in the long term. In the chart by Jastram you can see that in 1650 gold could buy the exact same amount of wholesale products as in 1970—over a time span of 320 years.

After the gold standard, gold has become more volatile, but the legacy of its stability is still with us. Because gold is the only international currency that can't be debased, people around the world keep holding on to it as a store of value. This makes gold the most stable currency in the long-term. Since the 1930s, when the U.S. dollar has been slowly decoupled from gold, the dollar lost 99% of its value against gold. This is the fate of “paper” currencies.

If you like to read more about gold’s stability over time, gold performance in comparison to financial assets, and my prospect for gold, please read my article “Why Gold, and Why Now.”

The views expressed on Voima Insight are those of the author(s) and do not necessarily reflect the official views or position of Voima Gold.

You are allowed to copy our content, in whole or in part, provided that you give Voima Gold proper credit and include the appropriate URL. The name Voima Insight and a link to the original post must be included in your introduction. All other rights are reserved. Voima Gold reserves the right to withdraw the permission to copy content for any or all websites at any time.

Nothing written in Voima’s blog or website constitutes investment, legal, tax, or other advice. It should not be used as the basis for any investment decision(s) which a reader thereof may be considering. The purpose of Voima’s blog is to provide objective, educational and interesting commentary and is not intended to constitute an offer, solicitation or invitation for investing in or trading gold.