December 11, 2020 Shocking Increase In U.S. Money Supply In Past Two Weeks
November 10, 2020 The Mother of All Seneca Cliffs… and Virtually No One Is Prepared
October 09, 2020 Tom Cloud Update: Some 401K’s Now Considering To Include Physical Gold Investment??
August 28, 2020 Precious Metals Better Investments: Uncle Sam Cuts Interest Payments to Bondholders
August 19, 2020 The Elite Grand Conspiracy or the Energy Cliff: Which One Should You Be More Worried About?

Disregard all the hype, manipulation chatter, and the silly mantra stating that “Gold is now Dead.”  The gold price was going to retest the $1,800 regardless of anything to do with Bitcoin’s price rise or Janet Yellen becoming Treasury Secretary.  If investors understood the gold fundamentals and technicals, they wouldn’t pay any attention to the Mainstream Media white noise. 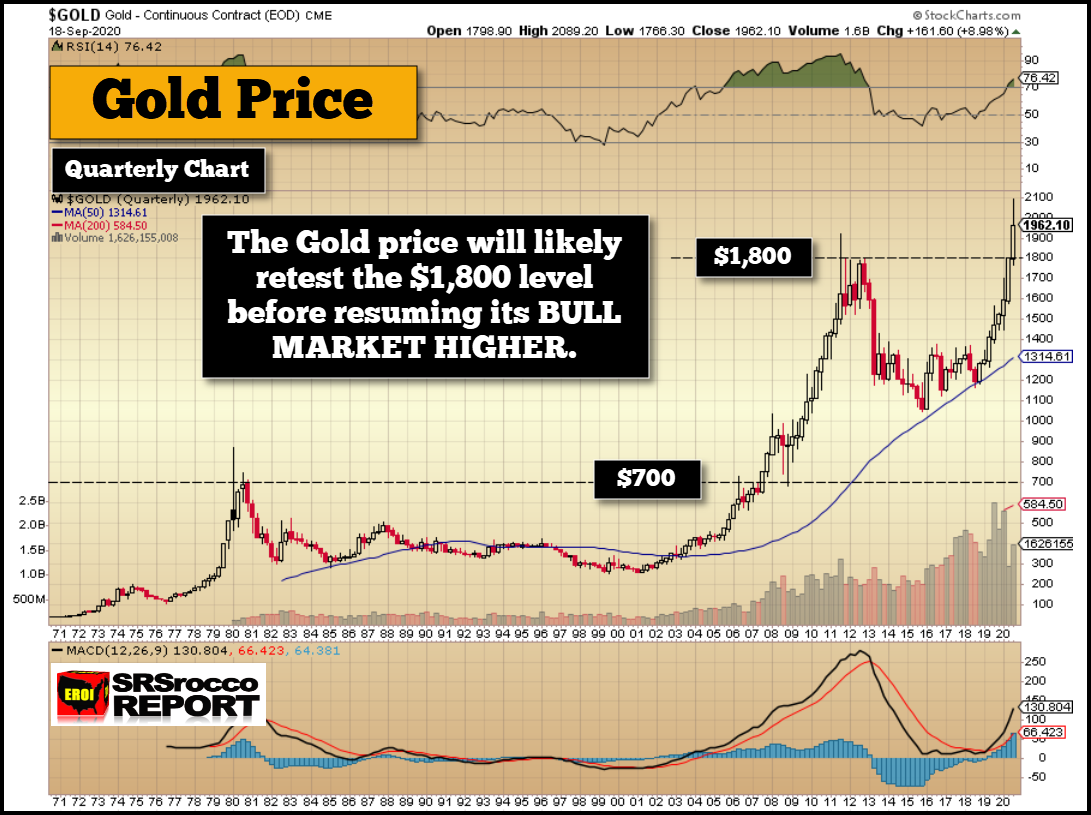 This is a quarterly chart of gold.  Each candlestick represents three-months of trading.  Using the quarterly chart, we can see a much different picture from daily, weekly, or even monthly charts.  You will notice in 2011 and 2012; the gold price attempted to break through and close above the $1,800 level… 6 TIMES and failed.  So, when gold finally broke above it in the third-quarter of 2020, there was a high probability that it would RETEST that $1,800 level before moving higher in 2021.

If you spend any time in the Day Trading markets, when a stock or commodity breaks through a long-term resistance level, it’s typical to retrace that level before heading higher.  Because the $1,800 was such a strong RESISTANCE LEVEL in 2011 & 2012, it only made sense that when gold shot up to $2,100 quickly, it would retest the $1,800 level.  This is exactly what traders expect to see.  I am not saying it’s a guarantee… but that is the way the market works.

Over the past two months, I have continued to provide updates for SRSrocco Report Subscribers showing a retest of the $1,800 was inevitable.  I also included a new technical indicator that I use in many charts now that the gold price would also likely retest the 5 EMA – Exponential Moving Average, shown below. 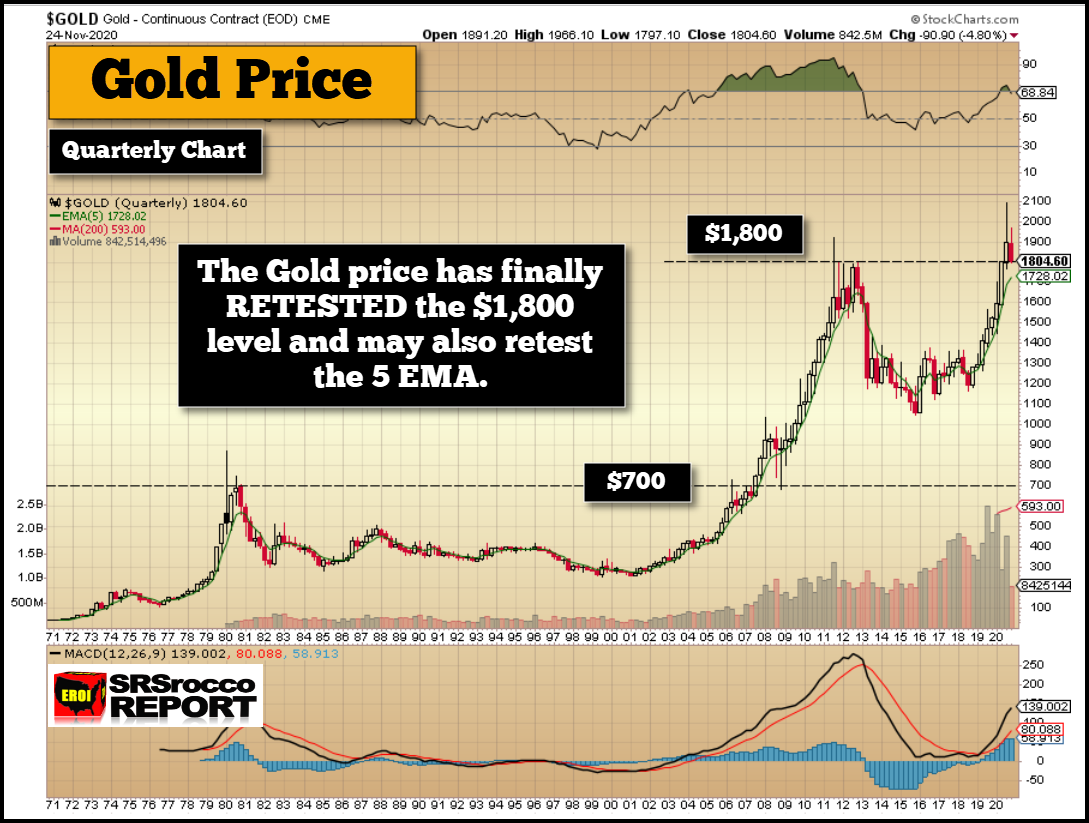 The gold price hit a low of $1,797 but closed at $1,804, according to StockCharts.com.  Thus, a RETEST of the $1,800 level has finally been confirmed.  And, this was going to happen regardless of all the completely WORTHLESS CHATTER on the Financial Networks, Mainstream Media, or Twitter.

I decided to make this chart public because of the CRAPOLA I see on Twitter. I spend some time positing information and debating individuals on the subject of the ENERGY CLIFF and EROI.

So, where is gold heading now?  Good question.  However, if we look at the 5 EMA, it looks to me that gold will likely retest this level as well before setting up for a leg higher.  I will be providing updates for Members.

This is the kind of analysis we provide subscribers that you can’t find anywhere else.  For example, we provided subscribers with the following two posts on technical analysis for MAG Silver and the Top Gold Miners, plus detailed analysis on why Kirkland Lake Gold’s share price underperformed in 2020. 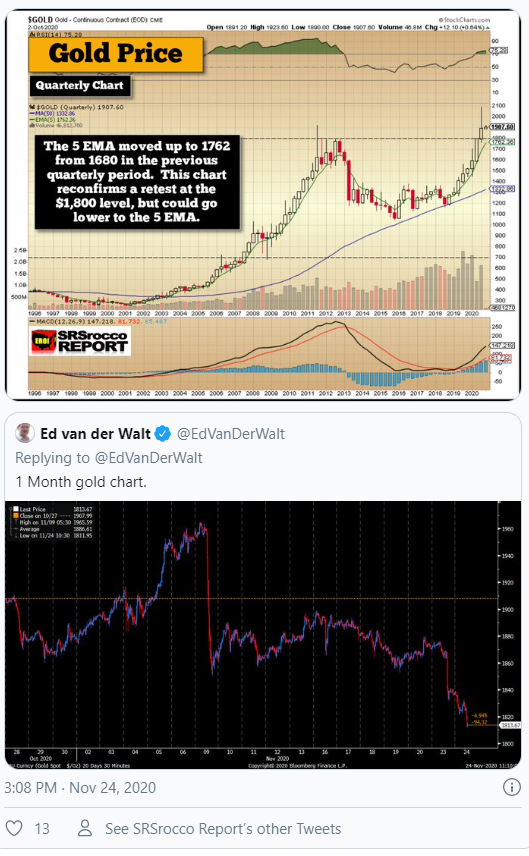 Actually, I posted my chart in response to the Ed van der Walt tweet, which you can’t see in the tweet above.  I don’t believe Ed van der Walt believes gold is dead; he was being sarcastic.  But, I wanted people to see that the $1,800 price was going to happen regardless of anything that happened in the market.

Again, I will provide subscribers with updates on what the technicals are showing for gold and silver.  However, the fundamentals will likely improve considerably next year as the Fed, and Central banks continue to inject massive amounts of money-injections and debt to prop up the crippled global economies. 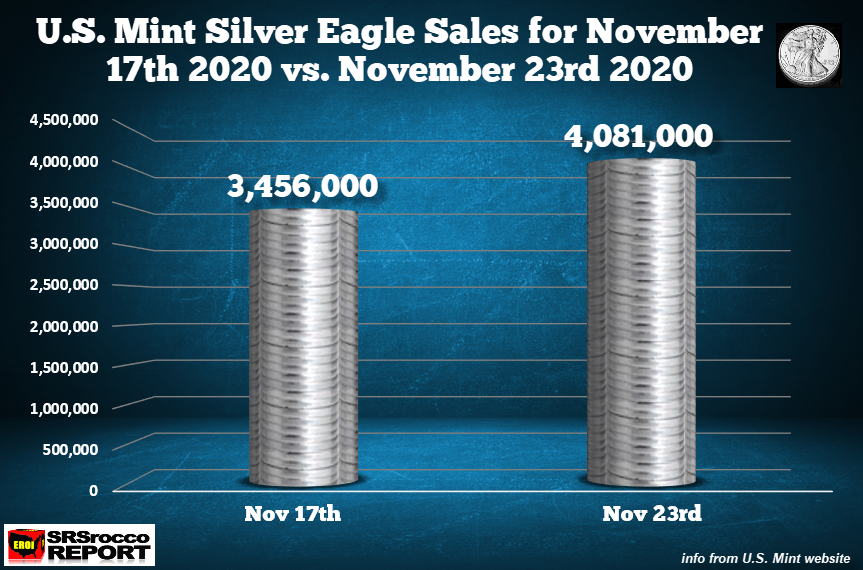 The total of Silver Eagles sold so far in 2020 is 28.6 million.  It seems highly likely that the total will reach 30 million for the year, possibly higher.  However, the U.S. Mint begins to set up for the new 2021 coins in December, so it will be interesting to see the demand and supply next month.  Furthermore, Gold Eagle sales increased by another 7,500 oz to a total of 776,500 oz for the year compared to 152,000 oz sold for full-year 2019.

The CRAZY DYNAMIC of the precious metals market, especially for silver, is that even when the price of silver heads lower, like it is currently, it motivates more buying of physical metal.  On the other hand, we are currently seeing a net outflow of metal from the global Silver ETFs.

We will see the silver price surpass $30 when the Fed and Central banks go ALL-IN to prop up the continued disintegrating global economies… especially if Congress passes the new FED DIGITAL DOLLAR POLICY.  Talk about consumer price inflation.  If the Fed Digital Dollar Policy goes through, that would be a good time to own some precious metals.

Independent researcher Steve St. Angelo (SRSrocco) started to invest in precious metals in 2002.  Later on in 2008, he began researching areas of the gold and silver market that, curiously, the majority of the precious metal analyst community have left unexplored.  These areas include how energy and the falling EROI – Energy Returned On Invested – stand to impact the mining industry, precious metals, paper assets, and the overall economy.

Steve considers studying the impacts of EROI one of the most important aspects of his energy research.  For the past several years, he has written scholarly articles in some of the top precious metals and financial websites.

You can find many of Steve’s articles on noteworthy sites, such as GoldSeek-SilverSeek.com