It’s a long and volatile road for the gold miners

A daily chart snapshot of the current technical situation for the HUI Gold Bugs index shows a small Head & Shoulders pattern that formed in July-August as noted in this August 28th NFTRH premium update (now public) before it broke down.

So we have Huey holding the neckline of an ugly little pattern today. What I find interesting though is that if the neckline is lost the pattern’s target would be around 178, which… is support area per the weekly chart.

You can see both charts as they were in the update linked above in August.

The daily chart has now gone through a progression where it broke down, came close to target, bounced, tested the SMA 50, failed and hit target and a spiked lower. This has conjured images of January 2016, when HUI took a quick dump and shakeout and then reversed hard into leg #1 of a bull market that is intact to this day. More on that shortly.

First let’s finish with the daily chart observations. We’ve got the whipsaw low and reversal, RSI is positive, MACD is trying for positive and HUI relative to SPX (bottom panel) is gaining traction but not yet much momentum (not necessarily a bad thing at this early stage). You can see clear resistance at 240 +/-. 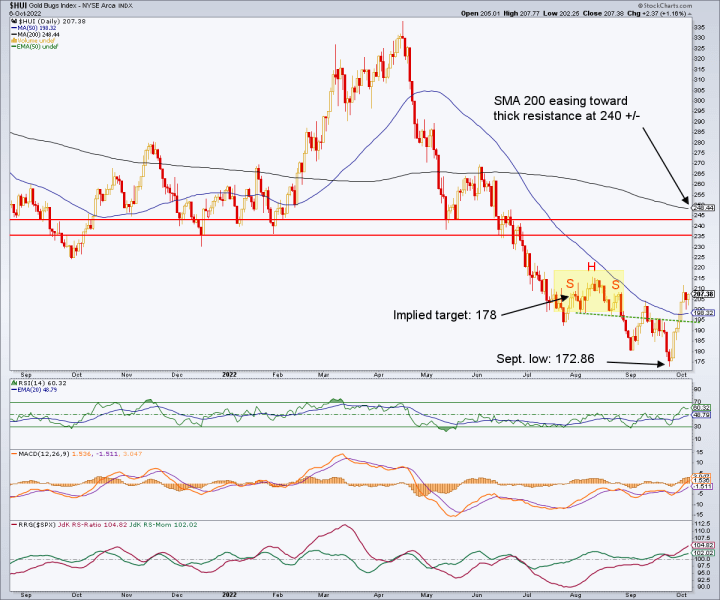 The monthly ‘road map’ of HUI is something we’ve been working to in NFTRH for years. That does not mean I’ve been bullish. I have not been bullish since mid-2020’s sentiment blow out and fundamental degradation as the inflation cycle* took hold. But it does mean we’ve been on watch for the 5th leg of a bull market, assuming Huey holds above a couple of important downside parameters we are working to, which are beyond the scope of this article.

What we can see here is a setup for leg 5 of the bull market, although one should be aware that until HUI takes out certain upside parameters that we manage by daily charts the (in my opinion) much lower probability that 2016-2020 was just an A-B-C major bear market rally is still in play. 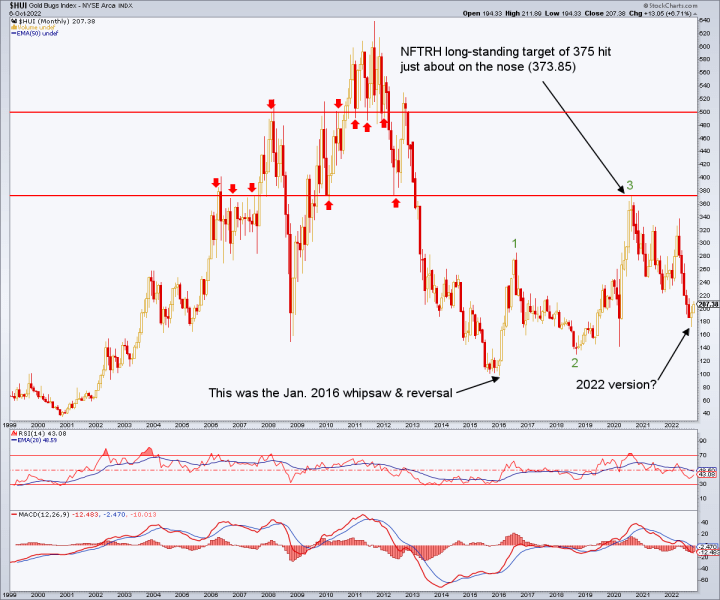 Of course that will depend on the macro and gold mining sector fundamentals. Touts of all stripes have imagined positive fundamentals since the top in August, 2020. So bear in mind that some guy with a chart (like me in the article you are reading) is not a sound basis for being bullish. No TA in any market in a vacuum is providing the full picture investors need. They are providing snapshots, trends, patterns and whatnot. But chart based indications break down more than the average chartist might like to admit; and that goes double for this relatively tiny, less liquid and highly volatile sector.

The road map above has us on watch for a) a low already in, b) a low to come at one of our open downside (bull market) targets or c) an utter breakdown from what would have in hindsight proven to be an A-B-C bear market rally. I’ll take ‘a’ or ‘b’ Alex. But the main point is that the fundamentals have made positive moves in 2022 and are still in progress. If that progression hits a certain point of positivity while the technicals confirm and bearish indicators like ‘real’ yields and the yield curve reverse, it’s going to be a big time ride upward, given all the angst hard wired into the sector since mid-2020.

I currently own a handful of quality gold stocks, including a core item I’ve held all along since 2019. And I’ve got a list of others at the ready because if leg 5 is indicated to be beginning after the September dump and reversal, it’s going to be a big time rally. See the upper red horizontal resistance line at 500? Not out of the question, folks.

If more downside work needs to be done in the interim, the big picture map along with daily charts will let us know when to buy or just as importantly, when to move on from the sector. Again, that is far from a favored scenario.

But first we need to confirm a bottom and also marry the fundamentals to it. Not the fundamentals tragically imagined by all too many precious metals participants, but the real ones that matter (also beyond the scope of this article, but you may have heard me hammer away at them over the years).