Gold Stocks Are Worse Than Gold

Gold stocks latest swoon confirms what has been stated and inferred in my previous articles about gold mining shares – namely, gold stocks are a lousy investment.

The original article linked in the preceding paragraph was published in September 2016. I just finished reading it again and find no reason to edit or modify its contents.

The price of gold peaked in the summer of 2016 – shortly before my article was written and published – at $1357 oz. (monthly average closing price). At that time the GDX (ETF index of gold mining shares) peaked at 30.60.

Both gold and gold mining shares (gold stocks) have been lower and higher since then, and the past six years have seen a fair amount of volatility. Lately, both gold and gold stocks have undergone downside corrections since their most recent highs earlier this year.

So where are we now?

Below are ten-year charts for gold (source) and GDX (source)… 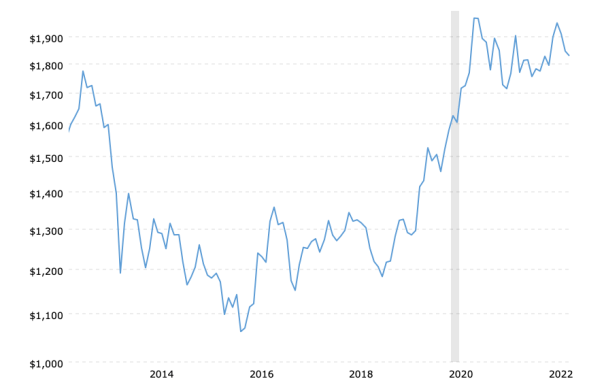 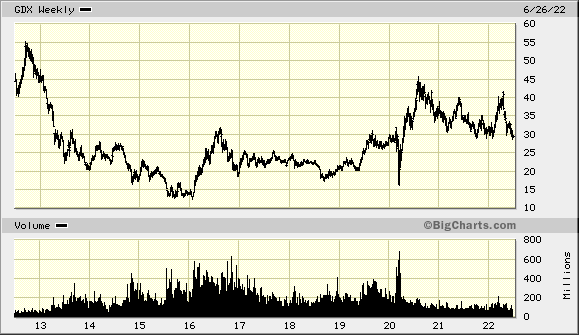 The GDX index of gold mining shares is currently 29.66. That is a decline of three percent during the same period in which the price of gold increased by more than a third.

Even if the three percent decline in gold stocks could be changed to a three percent increase, the mathematical calculation for comparison purposes would result in a more than ten-fold increase for gold over gold stocks.

More recent performance is similar. Since their respective peaks in 2020, gold is down eleven percent; and GDX is down by thirty-seven percent, more than three times as much as gold.

Finally, from their respective peaks in the past few months, the gold price has declined by eleven percent, whereas, GDX is down by twenty-seven percent.

Below is another chart (source). This one is the HUI to Gold ratio… 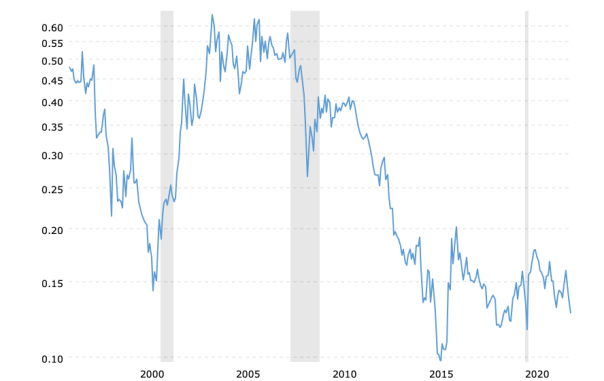 The HUI is an index of various gold mining stocks. The long-term downward trajectory is indicative and confirmative of everything we have said about the horrible underperformance of gold stocks compared to gold.

The down beat goes on for gold stocks, but it’s not a bad as crypto.

GOLD STOCKS NOT AS BAD AS BITCOIN, BUT…

Since its high last October (2021) the price of Bitcoin has dropped seventy percent. Currently at $21,068, the price of the new imaginary money was recently as low as $17,708, a decline of seventy-four percent.

The decline of seventy-four percent in the price of Bitcoin is nearly three times as bad as the recent decline in gold stocks.

That does not serve as justification for those who own gold stocks to talk trash about Bitcoin, however.

After peaking in 2011, gold stocks declined by more than eighty percent over the next four and one-half years.

Even though gold stocks as a group are more than double their 2015 lows, they are still priced at less than half of their 2011 peak.

Think of it this way…

Let’s say you invested/owned $100,000 in gold stocks at their peak in 2011. Less than five years later, your investment was worth $20,000; a loss of eighty percent. That is comparable to the loss incurred by holders of Bitcoin since last October.

IF your dogged determination kept you in the game until now, your investment is worth about $45,000. In other words, you still have a loss of $55,000.

For those who argue that someone might have purchased gold stocks at their lows, that’s great! Sell and take your profits.

It doesn’t mean that gold stocks are a good investment. All it means is that you speculated your way to a profitable trade. And, unless you caught the absolute lows, you could have done just as well or better by buying gold.

Sometimes it helps to be more specific, so let’s look at a chart (source) of Barrick Gold Corp… 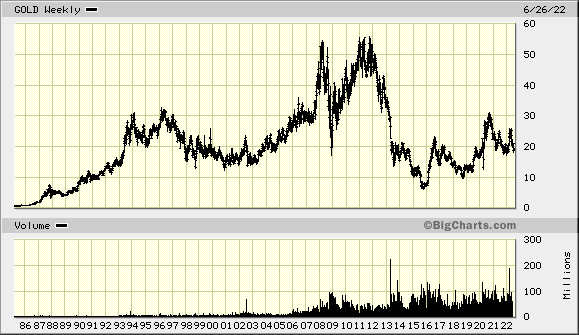 The most recent trading range for Barrick stock (20-30) is similar to where it was trading between 1993-97.

You could have bought Barrick at $20 per share in 1997, twenty-five years ago.

Or, you could have bought physical gold twenty-five years ago at $350 oz.

If you consider yourself a long-term investor, and you have owned Barrick for the past twenty-five years, you have gone nowhere.

On the other hand, if you had purchased gold instead, your increase is more than five-fold.

Investing in gold stocks is a losing game; the odds are against you.

It is not about patience. Time and fundamentals for investing in gold stocks are negatively oriented.

If you see a price spike upwards, take the money and run. (also see: The Rise And Fall Of Gold Stocks and Gold Stocks Vs. Gold – Not A Good Bet)