Tomorrow is election day and polls suggest that Americans are going to overturn Democratic Party control of the House and Senate. Politicians and the media always say that this is the most important election ever, but all too often once the voting is over and the smoke has cleared, not much changes. The Washington uni-party takes over and makes sure the status quo is maintained.

It doesn’t have to be this way. An incoming Republican House and Senate, for example, could take early steps to reassure their supporters that their votes weren’t wasted on Tweedledee vs. Tweedledum in Washington. Here are three suggestions to get things off to a good start.

First, Republican Party Leadership must vow to end the massive money spigot opened by the last Congress for Ukraine. By some estimates some $60 billion dollars have been authorized for Ukraine to fight a proxy war between the US/NATO and Russia.

This would be a move strongly supported by the Republican base. A recent Wall Street Journal poll showed that only 37 percent of Republicans support sending more US aid to Ukraine. Republican firebrand Representative Marjorie Taylor-Greene said recently that under Republicans, not another penny will go to Ukraine. While I am skeptical that her party leadership would support such a move, it’s clear Republican voters would.

Plus, ending this proxy war would carry with it the benefit of reducing the dangerously high possibility of global nuclear war. That’s not a bad trade-off.

Second, Republicans can signal that they will de-fund the Department of Homeland Security. At the time this monstrosity was created, I said this on the House Floor:

“The list of dangerous and unconstitutional powers granted to the new Homeland Security department is lengthy. Warrantless searches, forced vaccinations of whole communities, federal neighborhood snitch programs, federal information databases, and a sinister new ‘Information Awareness Office’ at the Pentagon that uses military intelligence to spy on domestic citizens are just a few of the troubling aspects of the new legislation.”

Unfortunately all of these things came to pass…and more. As we recently learned, the DHS has been colluding with social media companies to try and prevent Americans from being able to say or post opinions the government doesn’t want others to hear. 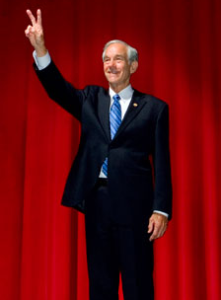 They promised that a Department of Homeland Security would keep us safer, but there is nothing that makes us less safe than the destruction of our Constitution.

Finally, the third task an incoming Republican House and Senate can take is maybe the easiest one: pass the Audit the Fed bill. Ten years ago the US House voted in a bipartisan manner to pass my Audit the Fed legislation only to see it stall in the Senate. With Republican control of both houses of Congress there is no reason a broadly-supported bill to open the books at the Federal Reserve cannot find its way to President Biden’s desk. We all support transparency, right?

Inflation is out of control and causing real harm to the American middle class. The Biden Administration seems determined to lead us to a potentially life-ending war with Russia. The Department of Homeland Security has turned into a weapon mobilized against the American people and our Constitution.

A Republican-controlled House and Senate can actually do something to fix these problems and thus make us more safe and more free. Will they?