Note: This post was begun on December 1, up to and including the two HUI charts below. The post was completed on December 2, after the November payrolls provided a good instigation for a broad market pullback, which included a ding to the miners from this logical resistance point.

The HUI rally has hit the logical resistance target where the 200 day moving average meets clear lateral resistance. It has done so in a not particularly overbought fashion due to the chop and grind it took to get here off the lows of the shaded bottoming pattern that we established and tracked in NFTRH over the last several weeks.

Now what for the HUI rally (and gold stocks in general)? Well, any trader who bought for a bottom/bounce to that target should be selling now [again, per Dec. 1st analysis]. This was noted in an NFTRH update on Thursday. But also noted was my personal view of large upside potential in 2023 to which the above resistance (240) is merely a gateway [excerpts added below].

That is where the monthly chart checks in and advises the upside target of 500 (+/-). This target has been in place since our target of 375 was registered in 2020, pending the need for another correction within the volatile post-2016 bull trend. But it’s a monthly big picture view and this HUI rally has a lot further to go if this is the bottom, and if our projection to a 5th bull market leg to come is correct. If so, another green arrow will be inserted around 500 at some point in 2023 or 2024. 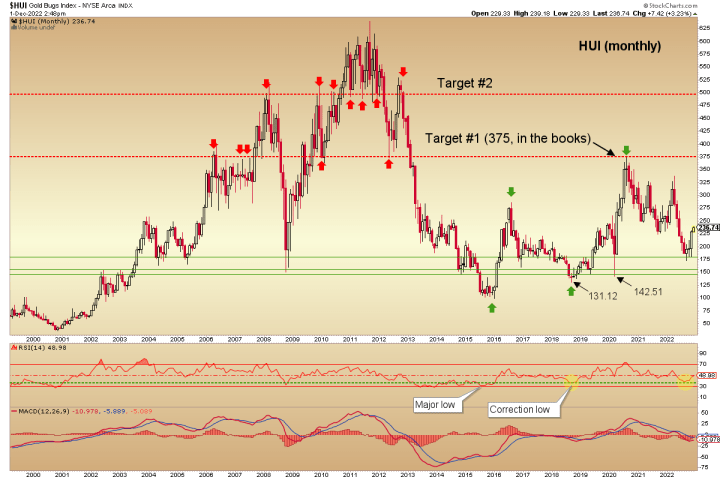 November Payrolls came in stronger than expected, but that is lagging stuff and affects our 2023 economic contraction view not in the least. This laggard provides the markets with an excuse to whip up a little Fed hawk angst, especially since casino patrons over played what dovishness they think they heard from Jerome Powell’s jawbone on Wednesday.

The true (as opposed to imagined by inflationist bugs) macro and sector fundamentals are in progress and there are enough leading economic indicators pointing south to keep the 2023 economic contraction view on firm footing. If that proves to be the case as expected, then the 5th leg up on the HUI monthly chart above is going to something to behold in 2023 or possibly 2024.

Gold stocks are targeting ‘HUI 500’ per NFTRH long-term technical analysis, Huey remains constructive shorter-term, pending normal volatility like today, and the fundamentals – the real ones that matter – are well in progress. Those fundamental indications are beyond the scope of this article, but if you’ve read me before you probably know what I am talking about, and it’s not inflation.

As the macro and sector fundamentals grind into place the volatility will be there in spades, especially if the broad market takes another bear market leg. But it is disinflation and even deflationary pressure that benefit gold mining, not cyclical inflation. As gold takes eminence over cyclical and inflation sensitive assets/markets the gold miners are expected to leverage that into, dare I say potentially ‘stunning’ upside.

It will take week to week, month to month management and discipline in choosing what is and is not ‘quality’ within the gold mining space. * If all goes as planned, NFTRH will be on that job in similar fashion to the resistance targeting that opened this article. From Thursday’s subscriber update…

Frankly, traders should be evaluating whether they want to take profits or not based on this resistance area. It’s a logical disturbance area.

I ended up taking a partial hedge on the miners into the November Payrolls report so as not to sell any positions. But that’s just short-term hedging, which for my methods will come into play occasionally along the volatile path to HUI 500 (+/-). Now that this post is done I’ll have to decide whether or not to hold the hedge. The main forward focus is on building a solid portfolio of quality gold miners (I plan to use silver, the metal, as a primary vehicle with only a few select silver miners).

* Let’s face it, the precious metals sector is rife with suspect to downright bad operators. Hence, consider the metals first and then selection of higher quality miner/royalty/junior positions.