Inflation Ain’t Transitory – But the Fed’s Credibility Is

Last week’s surge in gold and silver prices was due, at least in part, to a realization by Wall Street traders that inflation isn’t going away.

Fed Chair Jerome Powell had assured us all the trend higher in prices would be “transitory,” but another giant surge in the Consumer Price Index has investors wondering if they can believe anything Powell says.

They shouldn’t. People should view most of what Powell has to say about inflation in the same manner as they now view “14 days to flatten the curve” and other government lies.

Wage inflation, for example, isn’t going to magically reverse. Employers are offering bonuses and other incentives to attract new hires amid record numbers of workers quitting their jobs. Employees who are dealing with a surge in rents and other costs are also demanding higher wages.

High prices are finally driving higher wages, which will in turn put pressure under prices in a self-reinforcing cycle. Higher wages are exceptionally sticky.

Now that inflation has begun leaking out of the equity and real estate markets, it will be very hard to contain.

Some of the drivers behind higher prices could theoretically be resolved. 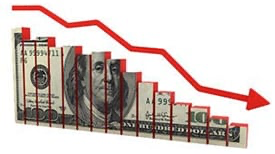 For example, solutions to the current supply chain problems which restrict the available stocks of many goods could go away. However, these troubles are complicated by government interventions and wider economic distortions.

One contributor is the shortage of willing labor, and it is difficult to imagine a quick resolution for that. The “help wanted” signs have been hanging for a year and a lower overall labor force participation rate – a decline in the number of people willing to work – is beginning to look permanent.

It is also possible for recessionary forces to be unleashed. The bubbles in equity prices or in real estate could pop. Another round of even more draconian COVID lockdowns can’t be ruled out. The nation could fall into recession, or even depression, and the slowdown could weigh on prices.

That possibility, however, brings us back to the ultimate cause of permanent inflation – the Federal Reserve. We are where we are today – with markets hopelessly addicted to stimulus – because the Fed responds to every whiff of deflation or market turbulence with massive amounts of stimulus.

The Fed can be counted on to keep pumping. The U.S. dollar has been in decline since Congress quietly birthed the central bank on a Christmas Eve more than a century ago. That trend accelerated after the President Richard Nixon closed the gold window in 1971.

Extraordinary programs, like quantitative easing, were originally sold as temporary, but have now been running nearly continuously for the past decade.

The Fed can’t stop ultra-low interest rates or bond purchases without creating a calamity on Wall Street. That is why stimulus and inflation will continue until this road’s inevitable end – a collapse in confidence in the U.S. dollar.

If Powell wants to use the word “transitory,” it should be in reference to the Fed’s credibility in maintaining price stability. Inflation is here to stay.