You can listen to the audio version of this article here.

Last week the cryptocurrency exchange FTX, which was recently valued at $32 billion, imploded.

While the tragedy continues to play out, let’s summarize what has happened so far:

For those that want all the details, we highly recommend Matt Levine’s ongoing coverage.

This is sad, for many reasons. Not least of which is that many financial livelihoods have been ruined, or are in the process of being ruined, at this very moment.

It’s also sad because it’s a sign of the times we live in. Take the following story as an example.

A disturbing aspect of the collapse is that among other large investors who were invested in FTX, was a Canadian teachers pension plan (!) 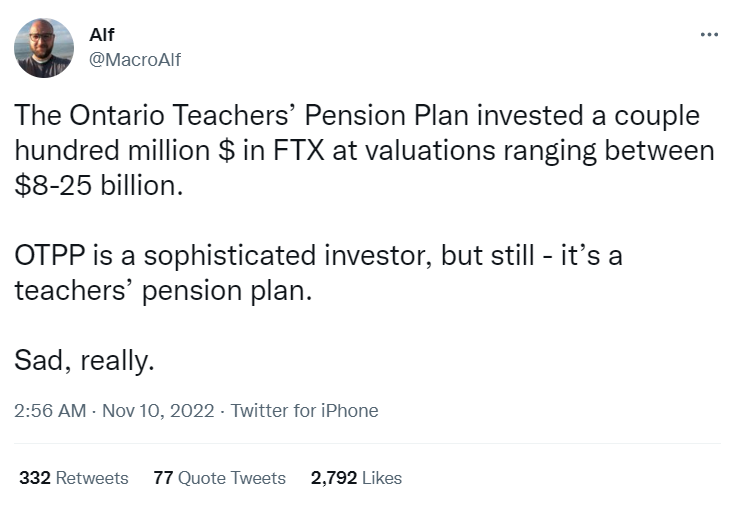 What type of world do we live in where a conservative pension fund would be investing in such a risky asset?

CEO Keith Weiner answered this question in his talk given at the New Orleans Investment Conference last month titled “How to Build and Destroy a Pension Fund System in 22 Easy Steps”.

Nowhere to run, nowhere to hide

The answer to why these institutions and individuals are speculating their way towards calamity is because of the Fed’s decades long falling interest rate policy. Everyone, especially pension funds, are desperately in need of yield, and will go to ever more dangerous lengths to acquire it.

Our centrally planned money and credit markets make it more and more tempting to go out on the risk curve in search of yield. As Keith has said before,  “Capital gains are the surrogate to earning interest or dividends.”

Of course, going out on the risk curve means some of those riskier bets will not pay off, and they could turn out really bad. This is the whole idea of the Risk-Return Spectrum. Higher yields mean more risk. This is especially ill advised if you’re running a pension fund and can’t be taking big losses on your bets. But with so little yield available, there are simply no avenues for these institutions to earn sufficient returns without having to resort to speculation. FTX is yet more proof that speculation isn’t sustainable, and can blow up in a fantastic way. And it looks like some pension funds could be next.

This disaster is also sad because it taints an entire industry that was, at least at first, built upon the premise of providing an alternative to centrally planned money and credit. That would be the one thing cryptobugs have in common with goldbugs–they both agree there needs to be a monetary alternative to fiat currencies.

If there’s one silver lining, it’s that cryptocurrencies have raised awareness on the issues of money, finance, and banking to the mainstream level. We don’t always agree with their proposed solutions, but the fact that more and more people are inquiring into the nature of money and the dollar, could be a good thing.

It will be a good thing only if they rediscover the role of gold as money. That is what we are helping people to do, and while the cryptoverse is reeling from this news, we just made another big step forward.

If you are interested in learning how to earn a yield on your gold and silver, get in touch with us.

I live at the intersection of finance, theology, entrepreneurship, money, and markets. When I’m not working full time for Monetary Metals & Co., I write a newsletter about what I find interesting. Subscribe below to receive each edition in your inbox.