Sentiment Speaks: Is Everyone Going To Be Right About This Bear Market?

If I'm reading all these articles properly, it seems that we're approaching the end of the world as we know it. In fact, I'm reading expectations of 40%, 50% and even 80% market declines. While I did not receive my invitation to this party, it seems that almost everyone else has and they have chosen to attend.

But, is that how the market works?

When the market was hovering in the 4800SPX region, I reiterated to the members of ElliottWaveTrader.net my expectation that we will likely revisit the 4400SPX region before the market begins its next major rally phase. In fact, I even warned them that the certainty that a new bear market has begun will likely be ubiquitous by the time we strike 4400SPX.

And, in my update this past weekend to our members, I wrote the following:

“The last time the market exhibited extreme fear was back in March of 2020. Now, don’t get me wrong. Our current situation is not anywhere near what we experienced at that time. In fact, the fear was so extreme back then, it was actually worse than the bottom struck back in March of 2009.

Nevertheless, the fear is certainly palpable here as well. One by one, analysts are coming out and telling us that the bear market has begun. And they have a myriad of reasons for their certainty about this “new” bear market conclusion. Yet, even before this decline began, I warned you quite strongly that this is what we are going to see. And the reason I did was so that you could emotionally prepare yourself for the fact that you are going to have to fight the pervasive negative sentiment in order to hit that “buy” button at a time when it will feel the hardest to do so.

In fact, everyone and their mother is likely going to be convinced (if they have not already) that a bear market has begun. And it must be that way. You see, the sentiment has to turn negative enough to support our next rally to 5500SPX, which is 1100 points away from where we closed on Friday.”

It seems the consensus of investors has concluded that the bear market has begun because the Fed is backing away from the market and raising rates. Well, that certainly sounds scary and quite convincing. Does it not? I mean, is this not the common market perception and expectation? And, certainly, everyone can’t be wrong, can they?

Well, if we're going to really be honest with ourselves, then we must remember that the market actually rallied 140 points off its intra-day low when the Fed announced the rate hikes at its last meeting. And what if I told you that I'm seeing signs of a sizable rally setting up in the bond market? Well, for now, I will leave that to my members. (smile)

So, the real question is what does history teach us about Fed rate increases? Are they really the death-knell to the stock market which everyone seems to believe?

These charts put out by Ken Fisher give us some insight. 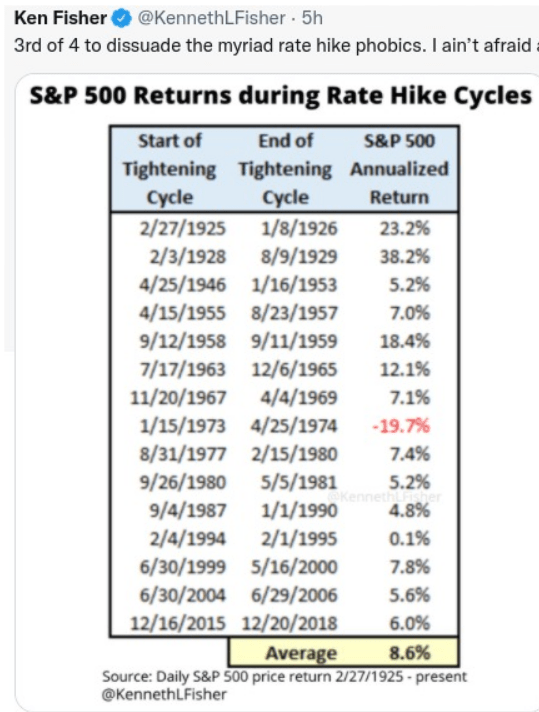 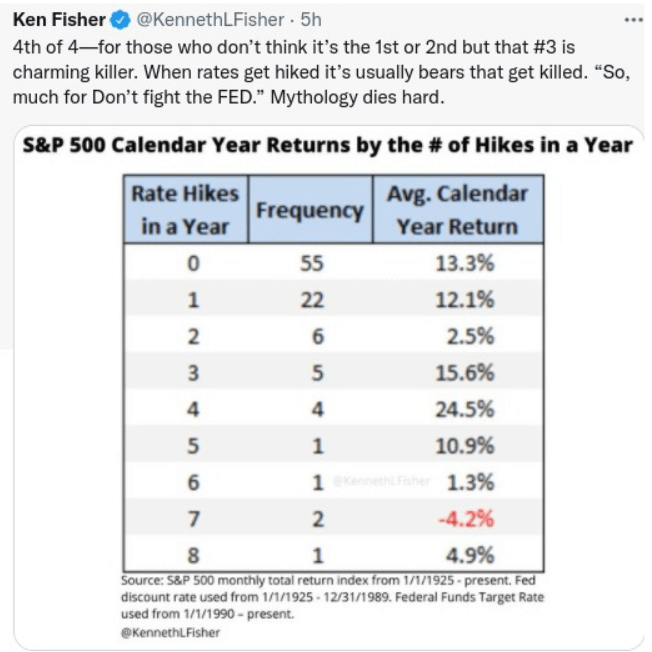 But why bother with actual facts of history when the commonly accepted narrative about the market sounds so much better!?

As another example, this past week, a commenter to one of my past articles noted how “obvious” it was that the spike up in gold we saw last week was caused by the Russian/Ukrainian issues. Well, I am sorry to say, but it was not so obvious to me. I thought that soldiers had been amassing months ago, yet gold was still dropping despite this news at the time.

Was gold “surprised” by the news that Russian troops were amassing on the Ukrainian border? Did gold not see the news beforehand? Or, are we going to parse this news to show something different that “caused” gold to rally, especially when we know it did not rally when the initial news of the troops amassing at the border came out? And after you're able to somehow navigate that logical conundrum, how do you explain the drop we experienced on Friday? Did the Russian soldiers back away from the border by 10 feet, causing the pullback we got in gold?

I think we can all see how foolish this perspective is at the end of the day. But why would an investor try to force this perspective to support his/her bullish view on gold? Well, there's always the reason provided by Ben Franklin:

“So convenient a thing it is to be a reasonable creature, since it enables one to find or to make a reason for everything one has a mind to do.”

While I was traveling recently, I had the opportunity to re-read the Socionomic Theory of Finance by Robert Prechter. And, while some may not appreciate his recent history of market calls, one must recognize the absolute brilliance and truth presented within the pages of this seminal volume. In fact, I personally view it as the most important book an investor can read to understand the true workings of our financial markets.

One of the topics addressed by Mr. Prechter in his book is the relationship between news events and market moves. While I have written extensively about this in the past, I want to take the opportunity to quote certain segments noted within this book, which should be truly eye opening to many of you – well, at least those with open minds.

“Observers’ job, as they see it, is simply to identify which external events caused whatever price changes occur. When news seems to coincide sensibly with market movement, they presume a causal relationship. When news doesn’t fit, they attempt to devise a cause-and-effect structure to make it fit. When they cannot even devise a plausible way to twist the news into justifying market action, they chalk up the market moves to “psychology,” which means that, despite a plethora of news and numerous inventive ways to interpret it, their imaginations aren’t prodigious enough to concoct a credible causal story.

Most of the time it is easy for observers to believe in news causality. Financial markets fluctuate constantly, and news comes out constantly, and sometimes the two elements coincide well enough to reinforce commentators’ mental bias towards mechanical cause and effect. When news and the market fail to coincide, they shrug and disregard the inconsistency. Those operating under the mechanics paradigm in finance never seem to see or care that these glaring anomalies exist.”

In a 1988 study conducted by Cutler, Poterba, and Summers entitled “What Moves Stock Prices,” they reviewed stock market price action after major economic or other type of news (including major political events) in order to develop a model through which one would be able to predict market moves RETROSPECTIVELY. Yes, you heard me right. They were not even at the stage yet of developing a prospective prediction model.

However, the study concluded that “macroeconomic news . . . explains only about one fifth of the movements in stock market prices.” In fact, they even noted that “many of the largest market movements in recent years have occurred on days when there were no major news events.” They also concluded that “there is surprisingly small effect (from) big news (of) political developments . . . and international events.” They also suggest that:

“The relatively small market responses to such news, along with evidence that large market moves often occur on days without any identifiable major news releases casts doubt on the view that stock price movements are fully explicable by news. . . “

Mr. Prechter goes on to highlight:

“None other than the chairman of the Federal Reserve weighed in on this very topic in testimony before Congress. The morning after a one-day 3.3% swoon in the DJIA in 2007, “The nations top banker said he could not identify ‘a single trigger’ that caused Tuesdays dramatic drop.” This is a remarkable admission for a macroeconomic mechanist who advocates “financial engineering.” More recently, August 20, 2015 sported the biggest down day in 18 months for stock prices, yet reporters admitted there was a “lack of major U.S. economic news” to explain it.”

To this date, economists and analysts still debate the cause of the Great Depression, the October 1987 market crash, the Asian financial crisis, the 2010 Flash Crash, and many other “anomalies” in the market. In 1997, a Nobel-prize-winning economist noted “The truth is that nobody really imagined that something like the Asian financial crisis was possible, and even after the fact there is no consensus about why and how it happened.”

“Can you imagine physicists endlessly debating the cause of avalanches? . . . Economists are mystified over the causes of market declines and economic contractions because they are using a mechanical model in the realm of finance where it doesn’t apply.”

“At best, news is the tardy recognition of forces that have already been at work for some time and is startling only to those unaware of the trend.”

When I said this over the last 6-9 months, I did not know what the news would be, nor did I care. And, what did the market do? The market topped at 4554 in the late summer, pulled back to 4270, then rallied to within 60 points of my ideal target overhead. And, now, we have certainly revisited the 4400SPX region. Moreover, I even strongly encouraged the members of ElliottWaveTrader.net to raise cash as we were hitting our recent highs.

Look folks, I am not saying I am perfect. Nor am I saying that I will always be right about the market moves. But, I am saying that there's something out there that you may be ignoring, or even choosing to ignore, simply because you don’t understand how or why it works. Many of you even believe it's impossible for it to work. Well, we have almost 8,000 members and almost 1,000 money manager clients who used to think the same as do you, but now think otherwise:

“It’s honestly like magic to me the way you’re able to predict moves in something I thought was completely unpredictable.”

While I cannot give you the detail I provide to the members of ElliottWaveTrader.net, I will tell you that we have some major support below us in the market. The lower end of that support is in the 4095-4270SPX region. As the market develops over the coming week, it will give us a better idea as to where within that support region the market will want to hold before we begin the rally to my next ideal target of 5500SPX.

Lastly, I have cautioned you to read my work very carefully, especially if you're not able to see the charts that I only provide to members. I have seen many people overlay their own expectations or interpretations upon my analysis, and present what they think I said in quite a bastardized manner. To clear this up, my expectation was to revisit the 4400SPX region once the prior rally completed. I never said that would be the bottom. My bottoming target is based upon several factors, one of which is where the market tops. And, since we came up short of my ideal target, my bottoming target had to be lower than 4400SPX.