Sentiment Speaks: This Is Impossible

Those that have read me for many years know my position regarding trading the news. I believe the news can be a catalyst for a move in the market, but the substance of the news is not determinative of market direction for such move. Yet, week after week, I am challenged by commenters when they see the market move in a manner which was seemingly directed by the news.

Allow me to repost something noted by Robert Prechter in The Socionomic Theory of Finance (a book which I highly recommend), which hits this point quite well:

“Observers’ job, as they see it, is simply to identify which external events caused whatever price changes occur. When news seems to coincide sensibly with market movement, they presume a causal relationship. When news doesn’t fit, they attempt to devise a cause-and-effect structure to make it fit. When they cannot even devise a plausible way to twist the news into justifying market action, they chalk up the market moves to “psychology,” which means that, despite a plethora of news and numerous inventive ways to interpret it, their imaginations aren’t prodigious enough to concoct a credible causal story.

Most of the time it is easy for observers to believe in news causality. Financial markets fluctuate constantly, and news comes out constantly, and sometimes the two elements coincide well enough to reinforce commentators’ mental bias towards mechanical cause and effect. When news and the market fail to coincide, they shrug and disregard the inconsistency. Those operating under the mechanics paradigm in finance never seem to see or care that these glaring anomalies exist.”

Moreover, in a 1988 study conducted by Cutler, Poterba, and Summers entitled “What Moves Stock Prices,” they reviewed stock market price action after major economic or other type of news (including major political events) in order to develop a model through which one would be able to predict market moves RETROSPECTIVELY. Yes, you heard me right. They were not even at the stage yet of developing a prospective prediction model.

However, the study concluded that “[m]acroeconomic news . . . explains only about one fifth of the movements in stock market prices.” In fact, they even noted that “many of the largest market movements in recent years have occurred on days when there were no major news events.” They also concluded that “[t]here is surprisingly small effect [from] big news [of] political developments . . . and international events.” They also suggest that:

“The relatively small market responses to such news, along with evidence that large market moves often occur on days without any identifiable major news releases casts doubt on the view that stock price movements are fully explicable by news. . . “

Yet, the significant majority of investors still look to news for market direction. In his book Thinking Fast and Slow, Daniel Kahneman explains why we do so from a psychological perspective. Specifically, he noted “evidence is that we are born prepared to make intentional attributions.” In other words, our minds engage in an automatic search for causality. Moreover, we also engage in a deliberate search for confirming evidence of those propositions once we hold them dear. This is known as “positive test strategy.”

“Contrary to the rules of philosophers of science, who advise testing hypotheses by trying to refute them, people seek data that are likely to be compatible with the beliefs they currently hold. The confirmatory bias [of our minds] favors uncritical acceptance of suggestions and exaggerations of the likelihood of extreme and improbable events . . . [our minds are] not prone to doubt. It suppresses ambiguity and spontaneously constructs stories that are as coherent as possible.”

“The causes of these cyclical changes seem clearly to have their origin in the immutable natural law that governs all things, including the various moods of human behavior. Causes, therefore, tend to become relatively unimportant in the long term progress of the cycle. This fundamental law cannot be subverted or set aside by statutes or restrictions. Current news and political developments are of only incidental importance, soon forgotten; their presumed influence on market trends is not as weighty as is commonly believed.”

“These [Fibonacci] ratios and series have been controlling and limited the extent and duration of price trends, irrespective of wars, politics, production indices, the supply of money, general purchasing power, and other generally accepted methods of determining stock values.”

So, as we were bottoming this past week just north of 4100SPX, and I was explaining to my members in a live video that morning that I was expecting the market to “bounce” off those morning lows, many were scratching their heads wondering how that would be possible, as Russia was pushing towards Kyiv. Well, if you wrongly believe that this news event would direct the market, then you would be scratching your head. In fact, so many were so sure that the market was dropping because of the events going on in the Ukraine. And, now, they are left dumbfounded that when the worst of the news began to be reported towards the end of the week, the market rallied 270 points off those lows.

At some point, news followers that constantly get surprised by market moves should open their eyes to the reality of their folly. But, since they know of no other way, they will continue to rely upon their superficial perspectives of the market.

Now, to be honest, I was looking for a “bounce” off the Thursday morning low to potentially lead to a lower low before this entire pullback off the recent all-time market high completed. But, as we were driving down towards those lows, I continually outlined to our members that while there may still be risk of 100 or so points lower, the upside potential was around 1400 points. It was time to focus on the forest rather than the pretty leaves.

I continued to drive this point home in a live video presentation I provided to our entire membership that very morning, as well as much of the daily analysis I was providing within our trading rooms. In other words, the downside was very limited from my perspective, while the upside was quite sizable. And, I made it clear to all our members that I was layering into long positions with the cash I also noted I was raising near the market highs struck two months ago.

And, I think these comments in our trading room suggest that the message was received by our clients:

“I just HAVE to brag on Avi and this site again! Waiting patiently for the drop to 4300-4100 wasn't easy but I held a lot of cash to begin buying in this range over the last two weeks. There is no way outside of this site and EW that I could have been in this position. . . Avi and the other analysts' charts are priceless when it comes to longer term investing. Thanks you so much!!!”

“I’ve been watching your $4050-4150 low call probably since late December while we were still making new highs wondering how that would play out . . . I still can’t figure out how you got the SPX $4100 lower low call to coincide with Russian invasion 2 months in advance though.”

But, the only way you can come to such conclusions is by realizing that the substance of the news is truly immaterial to market direction. And, if you did not learn that back at the Covid bottom, when the S&P500 rallied well over 1000 points during the worst of the death rates being reported, with economic shutdowns being announced all over the country, and with the record high unemployment numbers being reported, then you will not likely ever learn this lesson.

In fact, do you remember this? 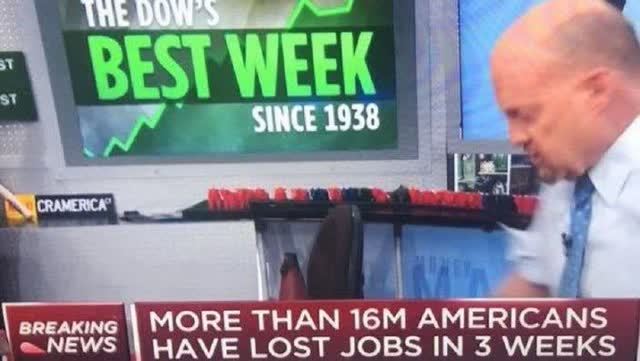 And, that is why you were likely scratching you head, yet again, during this 270-point rally off the bottom. In fact, I saw many headlines like this over the last few days:

Is it time to recognize the true perspective of news when you invest?

So, of course, the main question everyone is asking is if that was the definitive bottom? And, my answer is that the market will likely answer that question in the coming week. Most specifically, it looks like we are developing an initial 5-wave rally structure off the low struck this past week. That is an initial indication that the bottom is likely in place. However, we still need to see a corrective retrace from the high of that initial 5-wave rally, followed by a rally back over the high of the initial 5-wave rally. That would make it a high probability that the low for this pullback is likely in place, and that the rally to my next ideal target in the 5500SPX region has likely begun.

For those that have not been following our analysis for the last several years, allow me to recap my overall views and expectations. As we were striking the lows back in March of 2020, I outlined that I expected a rally from the 2200SPX region to at least the 4000 region, with my ideal target being the 6000 region.

As the market rallied strongly off the 2192SPX actual low struck, we entered 2021 in the 3750SPX region. While many were looking for either the market to crash back down again or for a very large pullback, I noted in early 2021 that I was expecting the market to continue its rally to at least the 4600SPX region before we see a pullback. And, even before the market topped out around 4546SPX and began a pullback, I outlined my ideal target for that pullback in the 4270SPX region, to be followed by a rally up towards the 4900SPX region (with the ideal target I shared with our members being 4882SPX).

Well, the market pulled back right down to the 4270SPX region, and then rallied up to a high within 60 points of my ideal target. Now, again, even before the rally topped out, I outlined my expectation for the market to pullback to the 4400SPX region. But, as I explained to our members before the drop began, there was potential for us to drop as deep as the 4100SPX region, since that was the bottom of the major market pivot I had outlined on my larger degree charts. And, after this pullback completes, I have been noting that my next ideal target overhead is 5500SPX.

This is where we stand today. I am seeking confirmation that this current pullback has completed, or whether we see one more lower low before we begin the rally I expect to my next ideal target in the 5500SPX region as we look out over the coming year.