Stock Market Risk Not Yet Realized

Stock market is at high risk, but…

The ‘but’ is the old saying “markets can remain [seemingly] irrational longer than you can remain solvent” if you fight a trend that is intact at any given point. Since March, 2020 that trend has been up.

Below is a chart showing the 10 week exponential moving average of the Equity Put/Call ratio (CPCE) that we review periodically in NFTRH for a view of the structural over-bullish situation in stocks. I write structural because it has extended much longer than extremes in the CPCE have done at previous ‘bull killer’ danger points, after which risk was realized in the form of moderate to severe corrections.

The trend began logically enough at a ‘bear killer’ reading in the midst of max pandemic fear. We noted at the time that market participants were not just bearish, not just risk averse, but absolutely terrified. So the recipe is this: take 1 lump of terrified investors, add a heaping helping of the Fed’s money printing and voila, enjoy the taste of a slingshot rally that is very filling despite its inflationary odor.

Risk? Well, when SPX took out the previous 2020 high last summer we established a target of 4400 (conservative) to 4600 (at an extreme). The market is in the target zone, CPCE has begun to labor up and out of the structurally over-bullish floor and well, it could be a signal of a latter stage bull market. But a warning about jumping into a heavily active bearish position is that using the run up to 2016 as an example, the pressure can build for months, even years before risk is realized. Another caveat to going full frontal bear is that the EMA 10 is starting to hook down again as pressure is being relieved lately. 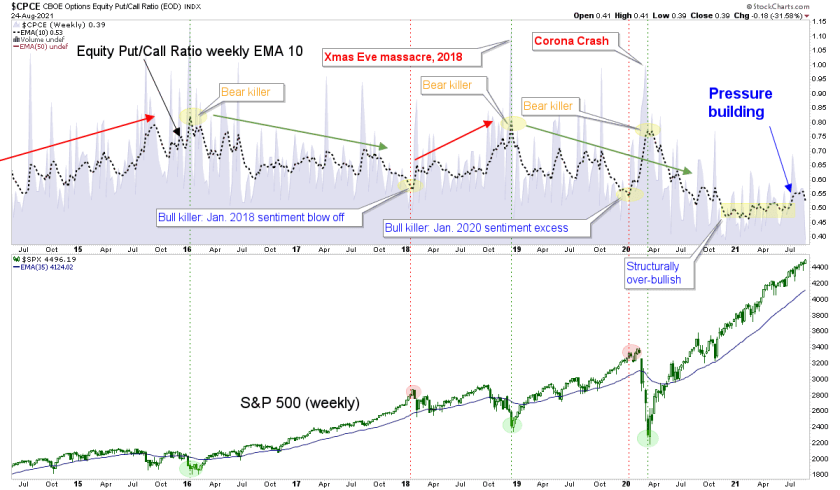 Little sentiment squalls have sustained the bull all through the 16 month rally. These have shown up among Ma & Pa (AAII) and investment managers alike (NAAIM). Election this, Fed taper that and Delta Variant the other thing… the market has found something to get nervous about periodically over the last year and the media have been all too happy to broadcast the scary news in its eyeball harvesting way. 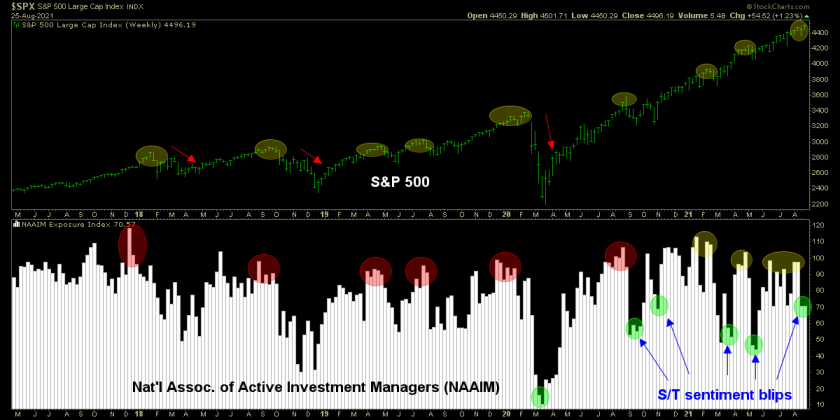 I have a theory that a market that knows it came from unnatural means (i.e. the Fed printed the bull market as surely as it printed the munny it is measured by) is subject to these sentiment squalls more so than one that is relatively viable in its own right (do we even have those anymore?). In other words, the market, a collection of you, me, ma, pa, human and algo traders alike, is paranoid about its own viability, and with every nerve wracking news event, a twitch. ‘mmm… yummy’, thinks the market, ‘gimme more’.

I’ve marked up this Sentimentrader graph of Smart & Dumb money indicators to show the little squalls of fear that have cropped up among the Dumb indicators over the course of the bull phase. We have noted in NFTRH that the market tends to feed off of these bouts of fear and with market trends up the view, despite my personal thoughts about valuations, structural sentiment and indeed the inflated origins of the bull market, can only be bullish (with an understanding of the ongoing risk backdrop and need for management thereof).

But if we are going to note structural over-bullishness per the CPCE we must note another structural consideration that appears to favor the bullish view; Dumb indicators have been in a trend of fading the market rally while more recently Smart indicators have bought it. So my bearish friends, there’s a caveat to concern yourselves with.

Stocks, Commodities, Materials, etc… these are cyclical markets and on this cycle, they are inflation sensitive markets as well. The Fed and its central banking fellows manufactured a bullish global macro to run on inflation, and on inflation it is running.

Important: Gold is not an asset market so much as an anchor to value, to something tangible and real. Gold does not move. Gold sits on its heavy ass. Gold sits while the other stuff orbits around it, moving up and down in relation to reflect bullish and bearish macro environments alike. Today the macro is bullish and it has been overtly bullish for a year. Don’t personalize it and most of all don’t try to always actively fight the good fight through thick and thin. Holding gold for the long-term is a very good strategy but fighting a macro manufactured by inflation will not work until said macro falls apart in an inevitable bust. Again, gold is real, heavy and of value. It’s time will come. But right now artifice and inflation are winning (duh).

Gold led commodities and stocks in the initial recovery out of the COVID-crash. But as the (funny) munny printing took hold and the confidence of the average casino patron began to firm a year ago the cyclical items began to rise in relation to gold. Folks, contrary to what the buggish gold community lecture on about, gold is doing exactly as it is supposed to do right now while bullish cyclical trends and thus, confidence remain intact.

When these ratios to gold break down from the uptrends it will be time to actively (and loudly) call RISK! As they stand now, it looks more like a resumption of the uptrends after several sideways months may be in play. But let’s clear the summer slack season before being too firm on one direction or the other. Da boyz is in dem Hamptins and dey be sippin’ da summah cocktails. When the market is back at full attendance post-Labor Day we’ll get a truer view of the macro. 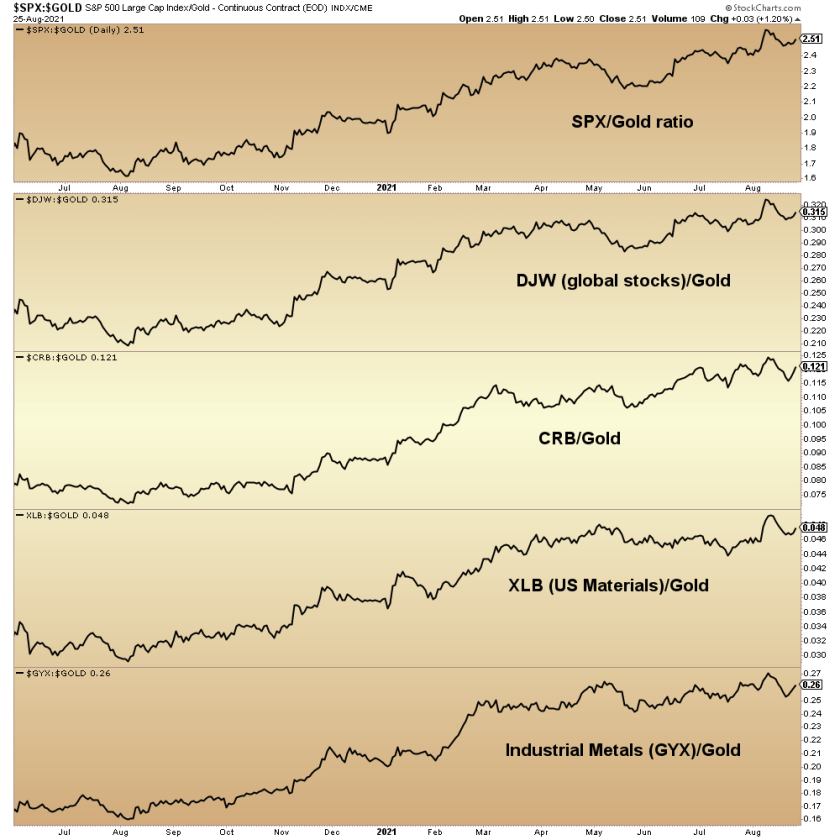 As the bull matures it is losing sponsorship. NFTRH tracks several indicators of market internals including breadth and participation. Here is one view of fading participation since March, as headline SPX (along with its headlining fellows DJIA and NDX) happily motors along while less visible legs of the macro table get kicked out from under it.

Come to think of it, this is probably a picture that tells us why the Dumb money noted above is fading the bull. Dumb indicators must be tied into the majority of stocks and the little guy tends to participate with smaller caps, looking to score the next baby Amazon or Apple.

Whatever, this and other views we track are not healthy from a market breadth perspective. It’s obviously an indicator of clear and present risk unless it clears. 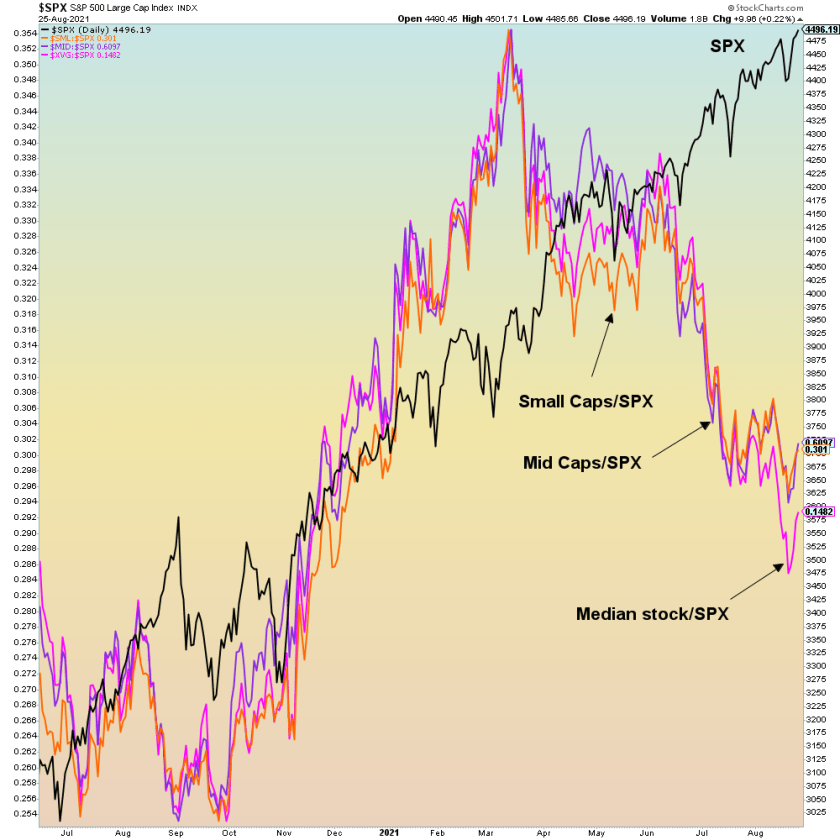 Every time I buy a Cloud/SaaS/Remote Tools related stock or a component of the ARKK ETF I think (and often note in the NFTRH Trade Log) “over valued”. If nothing else, healthy risk management means having an understanding of what you are buying and why you are buying it. This post is getting a little long in the tooth and so I am going to let Jill Mislinski of Advisor Perspectives, a solid fundamental source, close out this article.

As pointed out frequently in NFTRH, risk vs. reward and market prices are two completely different things. Risk is a factor to be managed. One definition:

Risk: noun; the possibility that something unpleasant or unwelcome will happen.

Is the Market Still Over Valued?

As we’ve frequently pointed out, these indicators aren’t useful as short-term signals of market direction. Periods of over- and under-valuation can last for many years. But they can play a role in framing longer-term expectations of investment returns. At present, market overvaluation continues to suggest a cautious long-term outlook and guarded expectations. However, at today’s low annualized inflation rate and the extremely poor return on fixed-income investments (Treasuries, CDs, etc.) the appeal of equities, despite overvaluation risk, is not surprising. 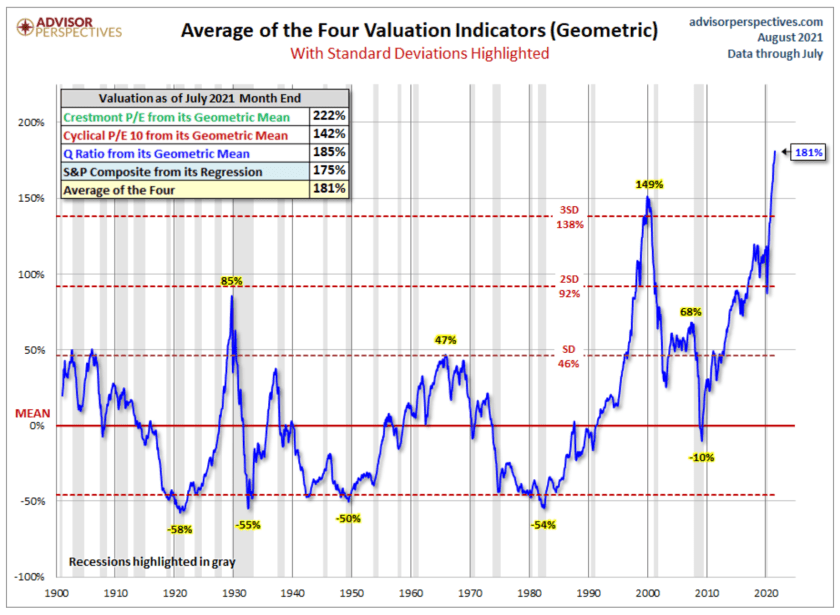