The Gold Miner correction was well earned, but it was not a bubble

Even today there is some pablum out there talking about how if inflation is good for gold it is especially good for gold miners. I will simply repeat once again that if gold usually does not benefit fundamentally by cyclical inflation (i.e. inflation promoted for and currently working toward economic goals) the gold miners never do, unless they rise against their preferred fundamentals as they did during two separate phases in the last bull market, which were justly resolved with crashes.

Here are a couple charts we used in NFTRH 648 in a segment written to set the record straight. We have also used these charts – especially the first one – since the caution flags went up last summer, visually by the first chart and anecdotally by the usual suspects aggressively pumping the unwitting masses. Buffett buys a gold stock!… okay, well so much for that. Sentiment became off the charts over-bullish and now, as we prepare for the final act of the correction, it’s the opposite. That’s perfect.

HUI had far exceeded the Gold/SPX ratio and so it was very vulnerable from a macro fundamental perspective. Why on earth would players want to focus on miners digging a rock out of the ground that was starting to fail in a price ratio to the stock market? They wouldn’t, and since last summer they didn’t. 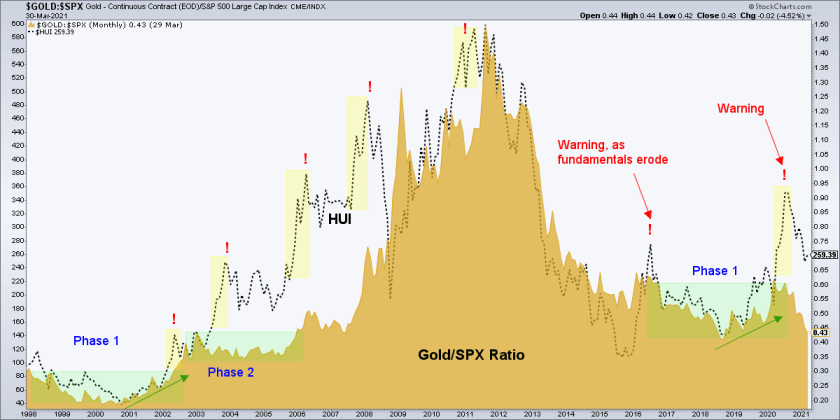 But from a sector fundamental perspective the Gold/Oil ratio (Oil/Energy is a primary driver of mining costs) and HUI show that the 2020 rally was nothing like the two bubbles of yesteryear, when not only did HUI hit danger signals (!) noted above by a macro fundamental indicator, it also made two separate bubbles vs. this sector fundamental. This time? Nope, no bubble here. 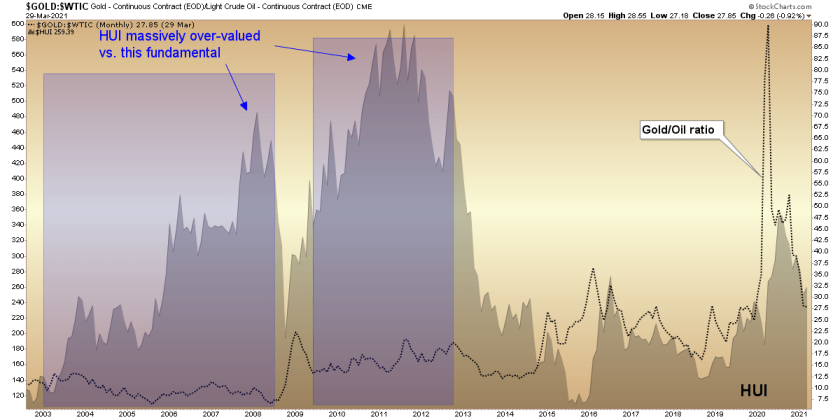 From a technical standpoint all Huey has done is what we expected since 2019, which was to make a bear market correction with a ‘C’ leg up to 375. Well… check.

All it has done since hitting the target is pull back as it should have. The index never was going to just keep on chugging through that thick resistance zone without a reaction of some kind.

I originally labeled it an upward A-B-C “bear market” correction back in 2019 because there was a long way to go before 375 would be approached, so no need to worry about definitions with a tradable rally to come either way.

Since then, and pending the current correction we’ve established target #2 around 500 with the prospect of this being a cyclical bull market. If that is correct, ladies and gentlemen allow me to introduce you to the first real gut check of the bull market. 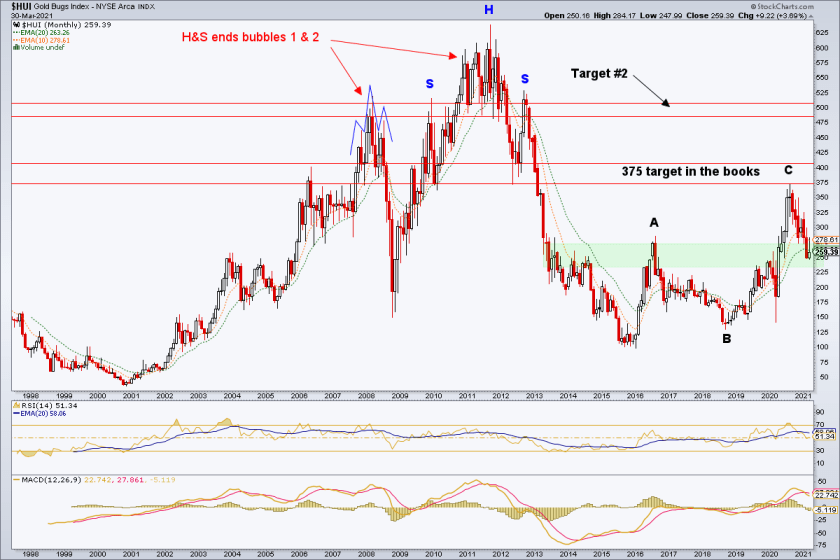 Of course, maybe 375 was it, as good as it gets as originally anticipated. A lot will depend on the prospects for continued cyclical inflation vs. a fundamentally preferred deflationary backdrop for the miners. The two bubbles (ended 2008 & 2011) came against inflationary backdrops. When the next rally comes – and it will – you will know to sell the hell out of the miners if they ramp up with inflation. You will also know to tune out the promoters because they’ll be promoting you right into the next crash (ref. Q4 2008 and the terrible decline in 2012-2013).

If on the other hand 77% of the public is wrong about inflation* or if the inflation morphs to a stagflation, then the fundamental prospects will improve if the macro swings disinflationary or deflationary and be open to new, possibly bullish analysis if the all-too rare Stag comes about and starts to wreck economies.

If we are lucky enough to get a clear and final capitulation buyers will want to think ahead to the nature of the next rally’s underpinnings and act accordingly.

* Without making a prediction about what will happen, let’s note that the public will always be huddled on one side of the boat when important macro turns do come about.