14 hours 44 minutes ago
COT Silver Report - August 12, 2022
1 day 23 hours ago
Was $18 Silver the Bottom? Next Pivot? - Lawrence Lepard
3 days 2 hours ago
Silver Coin Premiums – Another Collapse?
4 days 1 hour ago
The End Game for Silver Shenanigans...
5 days 1 hour ago
The Fed Is All Talk, and JPMorgan Trial EXPLAINED - Chris Marcus

Biden to Preside Over Another Financial Crisis

Being put in charge of the U.S. government’s finances in 2021 is a bit like being appointed captain of the Titanic in 1912.

More to the point, trying to avert a financial disaster ahead in the current environment is akin to trying to steer a doomed ship away from a deadly iceberg moments before impact.

By the time the Titanic’s crew had realized the impending danger in front of them, it was too late to change course. The massive ship’s momentum ensured a collision would occur.

President Joe Biden’s incoming U.S. Treasury Secretary will be virtually powerless to change the trajectory of government debt growth – a trajectory that history suggests will end in disaster.

Yellen Believed She’d Never Live to See Times Like These

On Monday, the U.S. Senate confirmed Janet Yellen to be President Joe Biden’s Treasury Secretary. All Democrats and most Republicans supported her nomination, with only 15 opposed. 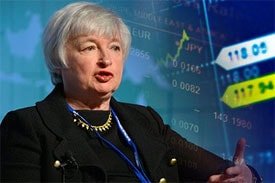 When President Donald Trump’s pick for Treasury, Steven Mnuchin, went to the Senate in 2017, only one Democrat voted to confirm his nomination.

Later in 2017, then Federal Reserve chair Janet Yellen stated she didn’t believe we would see another financial crisis “in our lifetimes."

"Would I say there will never, ever be another financial crisis? ... Probably that would be going too far. But I do think we're much safer, and I hope that it will not be in our lifetimes, and I don't believe it will be," she said during a conference in London.

Obviously, Yellen couldn’t have been expected to foresee the outbreak of a highly contagious novel coronavirus from China. But she shouldn’t have been so confident about central planners’ ability to steer the economy away from the next disaster.

The particular trigger points for financial crises are inherently unpredictable.

The next one could be kicked off by a natural disaster, a terrorist attack, a political upheaval, a bank failure, a debt default, a spike in interest rates, a surge in inflation, or something else entirely.

Treasury Secretary Yellen believes runaway government debt spending isn’t a risk factor for the next crisis, but rather the solution to the current one. During her recent testimony, she urged Congress to “act big” on stimulus.

Acting big means pushing an already record-high budget deficit even higher – likely to over $3 trillion this year. Meanwhile, the official accumulated national debt (not even counting unfunded Social Security, Medicare, and other liabilities) is approaching $28 trillion – well in excess of total U.S. GDP.

The powers that be in the U.S. have managed to keep kicking the can down the road for longer than many sound money advocates had thought possible.

But fiscal and monetary policy have now entered a new and dangerous phase. Politicians promise to literally send out cash (“stimulus”) to millions of voters while the central bank monetizes the deficit spending and abandons previous commitments to “stable prices.”

The specific danger ahead is inflation.

The official consumer price inflation figure reported by the Bureau of Labor Statistics is just the tip of the iceberg.

The true magnitude of the inflation problem that could hit the economy is represented by a spiking currency supply and the untold trillions more dollars that will have to be created in the months ahead on behalf of the Treasury Department’s ever-growing borrowing needs.

Skeptics who say there’s no underlying inflation problem apparently think the stock market, Bitcoin, and other financial assets have simply “inflated” on their own. But they won’t be so sanguine when inflation manifests through record-high food, energy, and precious metals prices.

Gold and silver are more than just inflation hedges. They are insurance against various sorts of financial and political crises – including the ones nobody sees coming.

Precious metals markets can be just as unpredictable day-to-day as world events. Over longer periods, however, they more reliably reflect the inverse of investor confidence in the Federal Reserve Note.

As Treasury Secretary Yellen together with her protégé Jerome Powell at the Fed prepare to pursue “weak dollar” policies and coordinate globally with other central planners, investors may find that the world’s strongest currencies are physical precious metals.