MarketWatch used to pick up my posts on rare occasion but has not done so for a long time. Maybe they think I make fun of some of their articles or something. I don’t know what would give them that idea. I actually find MarketWatch useful in ironic and non-ironic ways.

But anyway, this morning an article tags along with the recent near-deafening Bitcoin noise…

6 reasons are given for Bitcoin’s re-found popularity. They are the usual pap, including a Dollar/Gold rationalization.

“Bitcoin as a form of digital gold is also seeing its time in the sun as we see the floodgates open on monetary policy. Closing the sluice gate is more difficult than opening it,” Charles Hayter, founder and CEO of CryptoCompare, a company engaged in bitcoin data and analytics, told MarketWatch.

Bitcoin is not a form of digital gold. That is one of the zaniest things I’ve ever seen in print. I am admittedly an old fashioned gold valuing curmudgeon. But in my opinion Bitcoin is a digital concept; one that I think can be controlled or co-opted by governments more readily than the gold buried in the woods behind some crusty old bug’s Unabomber shack (to boot, the digital kids are not guarding their hoards with physical shotguns, just maybe virtual hacks or viruses). 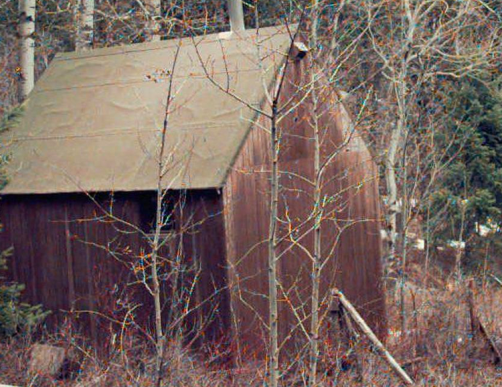 It was time. Bitcoin is having its technical day in the sun and only this week hit the target NFTRH has had for it since early 2020. Due to nutty rationale like the above and the weight of momentum-fueled money starting to pile in, not to mention an overbought reading on this weekly chart, I think it can pull back here. Possibly to support at the 12500-13500 level.

But though I’d originally thought it would be a post-bubble bear market bounce (A-B-C inserted here for effect), the higher low at B would indicate an intact and major bull market if C ticks above the 2017 high of 19870.62. 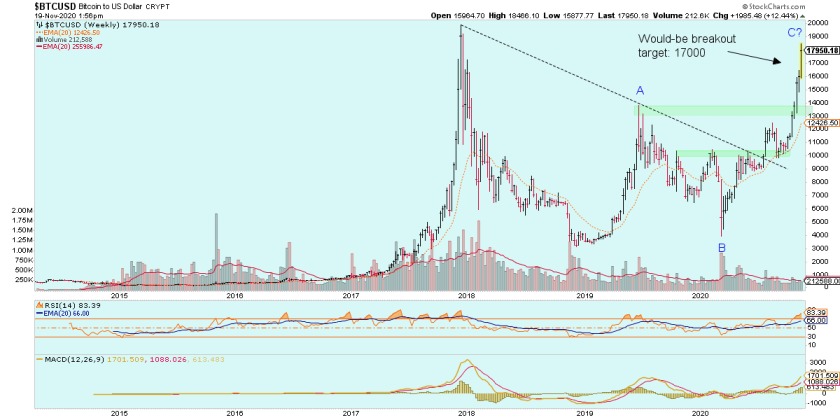 I took the profit on half of my GBTC position, removing most of the original investment. It seemed like a logical thing to do until BTC/USD decides between A-B-C or major bull market.

Meanwhile, for we old fashioned gold bugs, a healthy process is playing out because gold is now releasing the hordes of monetary refugees that knee-jerked aboard earlier in the very troubled year of 2020. Gold has been valued by humans for centuries. It’ll be fine, regardless of what Bitcoin does.