Is the entire financial system currently in a massive bubble? That is the question that astute investors may now be asking.

According to Nouriel Roubini, CEO of Roubini Macro Associates and professor at NYU Stern School of Business, now is the time to be overweight gold as more bubbles pop up. 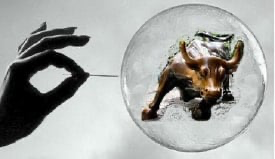 Stocks, bonds, crypto, tech, real estate, whatever sector you want to focus on – these all appear to now be building into or rapidly falling from bubble territory.

The higher these markets do ascend, the greater the eventual fall may be.

That fall could be arriving sooner rather than later and may catch many unsuspecting investors off-guard.

Stocks are now valued at levels that have not been seen in some time, if ever before. Real estate is booming, with price advances well into double digits in many regions. The risk of a major correction across many asset classes continues to rise.

Based on the total stock market capitalization to GDP ratio, the market is now 100% overvalued on a historical basis. To put that figure into perspective, the height of the tech bubble saw stocks become overvalued by some 49%.

The adjusted price/earnings ratio known as CAPE was developed by Yale economist Robert Schiller. This metric is favored by many of the sharpest minds in the market as a gauge on whether stocks are under or overvalued.

As recently as early April, the CAPE registered a reading of 36.8. The measure has only risen that high once before in the 139 years it has been tracked… immediately before the 1929 crash, the CAPE reading peaked at 33.

When CAPE reached extreme levels in the past, the market tumbled rapidly and lost a significant portion of its value – well into double digit declines. Do current readings suggest a similar outcome?

It is impossible to say when the freefall may get going. Stocks have shown a strong tendency to become overbought and eventually become wildly overbought in a process that can take weeks, months, and even years.

The day of reckoning will come, at some point, however, and those who are unprepared will get bloodied.

Of course, it’s not only stocks that have become severely overbought.

Numerous asset classes from housing to cryptocurrencies have zoomed to unprecedented heights in recent months.

Although speculative investments may provide investors with significant upside potential in the near-term, too much exposure to assets in bubble territory carries tremendous risks.

For example, Dogecoin exploded in price this spring on social media hype and Elon Musk cheerleading. But it has since crashed by more than 65%.

Once a bubble pops, the implosion can occur swiftly and there may be few places for investors to hide.

Against the current backdrop of low interest rates, massive quantitative easing, and rising sovereign debt levels, there may be no better place for investors to turn to than physical precious metals.