The Case for a Platinum-Plated Metals Portfolio

With gold just coming off a new all-time high above $2,000/oz and silver having more than doubled off its March bottom, some investors may be wary of entering these markets right now.

However, when adjusted for inflation, when measured against the stock market, or when compared to total money supply, a strong case can be made that gold is not yet overvalued – and that silver remains undervalued.

Investors who are seeking an even more deeply undervalued opportunity within the metals space should take a look at platinum.

What makes the case for platinum in particular compelling compared to other metals? In a word, scarcity.

Platinum is more than twenty times rarer than gold. It is so rare that all of the platinum ever mined could fit into a room measuring 25 feet by 25 feet. 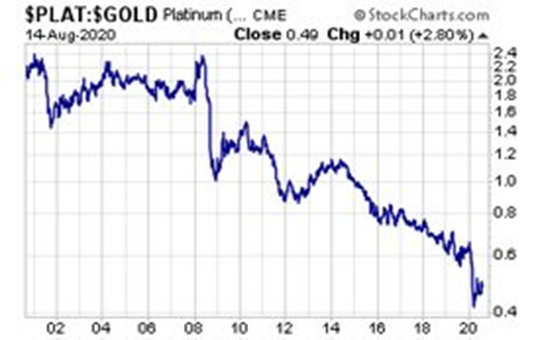 Historically speaking, platinum is greatly undervalued as compared to gold.

Of course, being scarcer than gold doesn’t necessarily make it more valuable. In recent years, Mr. Market has decided that gold is more valuable than platinum, with the latter facing some negative fundamentals.

An ounce of gold currently commands about double the price of an ounce of platinum. But historically, platinum has more often sold at a premium to gold.

The opportunity for investors is that mean reversion could take platinum back up to a 1:1 ratio with gold and then perhaps a healthy premium over the yellow metal. That would deliver buyers of platinum at current prices returns measured in multiples even assuming gold prices go nowhere.

What about the risk that platinum goes nowhere? The case against platinum is that its demand profile is very narrow, dominated by the automotive industry, and is generally not held in monetary reserves like gold.

In large part due to a big diesel-emissions scandal a few years ago, platinum has been out of favor for use in auto catalysts as manufacturers have turned more to its sister metal palladium. But with palladium now costing more than double what platinum does, incentives for substitution are strong.

There are also incentives for investors to substitute or supplement with platinum as part of their hard asset mix. Inflows into the top platinum exchange-traded fund have surged this year along with the broader wave of gold and silver buying.

It won’t take much of an increase in demand for platinum to overwhelm mining supply. The platinum producing industry, such as it is, will struggle to arrest declining output levels.

“Beset by power and water shortages, alongside whipsawing government policies, South African producers have cut spending over the past decade on mines responsible for 75% of global platinum supply,” reports Bloomberg.

The article continues, “Platinum output peaked in 2006, and the lack of investment in deep-level western limb shafts will result in a further sharp contraction in production over the next 10 years.”

Platinum is set to become scarcer and scarcer.

The bleak supply picture is, for now, clearer than the demand outlook. Industrial demand could continue to slump if automakers shun platinum for palladium and focus increasingly on electric vehicles that require no catalytic converters.

At the same time, however, platinum is a key component in certain fuel cell technologies. The white metal is used in cancer-treatment drugs, and platinum-cured silicone mixtures are used in a range of personal care products from lipsticks and shampoos to contact lenses.

More than likely, the ultra-dense metal will find additional practical applications and will likely see growth in both jewelry and bullion demand.

As a hard asset, platinum should benefit from the inflationary environment the world now faces. Meanwhile, if there’s an economic recovery, platinum prices would receive a new tailwind from rising industrial activity.

As platinum sales tend to be a small fraction of gold and silver sales for most dealers, inventories of platinum products may be sparse and premiums and bid/ask spreads can widen when market conditions are tight.

Some dealers will try to make the most out of the occasional platinum transaction by pushing heavily marked up “proof” coins. An investor who simply looking for an efficient way to accumulate platinum should avoid these types of products – and these types of dealers.

Money Metals Exchange is proud to offer the most efficient way for individual investors accumulate physical platinum bars – Vault Platinum. Through this program, you can buy physical platinum securely stored with Money Metals Depository without the markup of minted bullion products. And you get the ultimate in security for your platinum by storing in our Class 3 state-of-the-art vaults.