Christmas Good Cheer for Investors in the Chinese Stockmarkets…

Whilst US markets have been forging ahead since the Summer despite the economy imploding, powered by profligate money creation by the Fed, Chinese markets has been “treading water”.

The New World Order (NWO) is on a mission to destroy US exceptionalism. Since the end of the 2nd World War, and especially since the end of the Cold War, the US has been the undisputed economic powerhouse and leader of the world, that is until the rise of China. The reason for this was the combination of a dynamic entrepreneurial business ethos and the US being in possession of the world reserve currency, which enabled it to print unlimited quantities of money to exchange for goods and services with trading partners. However, US exceptionalism, as expressed by the likes of Trump, stands in the way of the NWO’s plans which call for all nations to be subservient to its will and direction. The US in its present form must therefore be destroyed, and that is what is happening right now under cover of the virus hoax. The objectives of the NWO are to create a global communist / Marxist / fascist technocratic totalitarian two-tier society / system with the top tier being an immensely wealthy controlling elite, and everyone else being a tightly monitored and controlled serf. This is what communism has always been about, witness Stalin’s Russia for example, but advances in technology are taking things to an entirely new level.

Communist China is much more in keeping with the philosophy of the NWO than the hitherto capitalist US, as it is already to a considerable extent a two-tier society that has become largely cashless, with the population monitored and awarded points depending on whether they behave themselves or not and rewarded or punished accordingly like children. This is the system the NWO has planned for whole world, and in fact they used China to “dry run” the social credit score system. Klaus Schwab, the godfather of the NWO, who likes to dress up as Darth Vader, has expressed his admiration for China and is in cahoots with the Chinese authorities. Thus it should come as no surprise that while the US is being subjected to brutal lockdowns intended to wreck the economy and wipe out most small businesses and the middle class, and make the survivors dependent either on employment by large NWO owned corporations or on government handouts, China is doing relatively well, with the virus purportedly under control and few lockdowns. Why is that?, you may ask, well, the fraudulent virus tests can be adjusted up or down to produce a lot of cases or a few depending on where they are carried out and what your political and social objectives are. So if you want to destroy the US economy but not the Chinese economy, you produce a lot of cases in the US and use them as justification for imposing lockdowns, and few in China so that it can carry on as normal – so easy when you know how. Now perhaps you will understand why the price of copper, which is mostly consumed by China, keeps making new highs. In other words the NWO have decided that China is to become the dominant world power, because it is in accord with the NWO’s master plan, while the US is slated to be torn down and turned into “just another country”.

The reason for setting out all the above is because it will help you to understand why the Chinese stockmarket appears to be setting up for a monster rally. Given that the US economy is imploding with most of its small businesses, which are the backbone of the country, either dead or dying, it seems very odd indeed that US stockmarkets have been outperforming those of China and making new highs. The explanation for this however could not be simpler. In the face of economic collapse the Federal Reserve has been creating vast quantities of money to head off a credit lockup, and at the same time has used the crisis as cover to funnel trillions into the pockets of its crony pals in major banks, corporations and on Wall St. while the general population get crumbs in the form of derisory “stimulus checks”. Whilst big corporations and the super wealthy are benefitting from all this, the fact remains that overall the US economy is being destroyed, by design.

In marked contrast, while China certainly has serious debt problems as well, its economy is not being willfully destroyed by lockdowns etc. What this means is that it is gaining a competitive advantage out of this setup and thus the balance of power is changing in favor of China.

It is with the benefit of this understanding that we will now proceed to examine the latest charts for the Shanghai Composite index.

On the 20-year chart for the Shanghai Composite we see that there was a massive bubble in 2006 – 2007 that sucked in everyone towards the top, including housewives and taxi drivers etc. This led inevitably to a crash as the A-wave of a 3-wave A-B-C bearmarket which was then followed by a “Son of Bubble” bullmarket in 2014 - 2015 when everyone thought the game was on again. This was followed by another crash and another 3-wave A-B-C bearmarket. Notice how this last bearmarket has found support at the boundary of a Bowl pattern, which since this is China, is more appropriately labeled a “Wok” basing pattern. Right now the market is simmering and being brought to the boil by the now rising boundary of the Wok with the boiling point being the resistance level shown – once it gets above that it is likely to take off strongly higher. 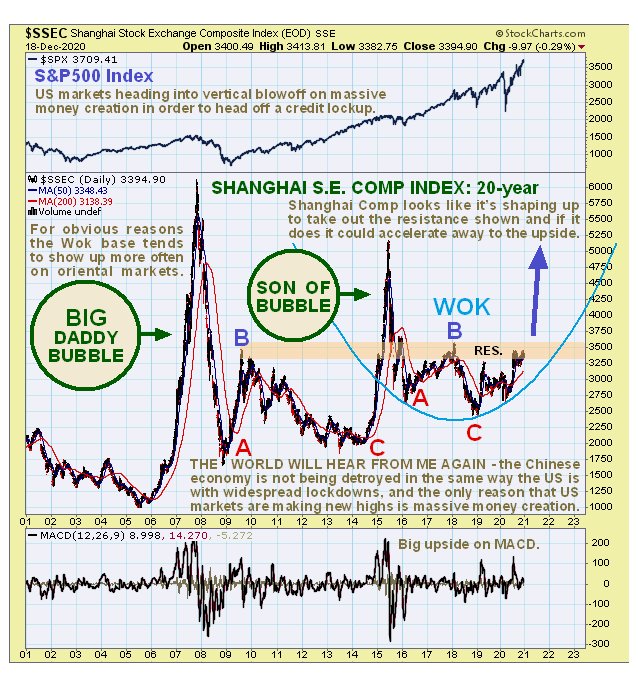 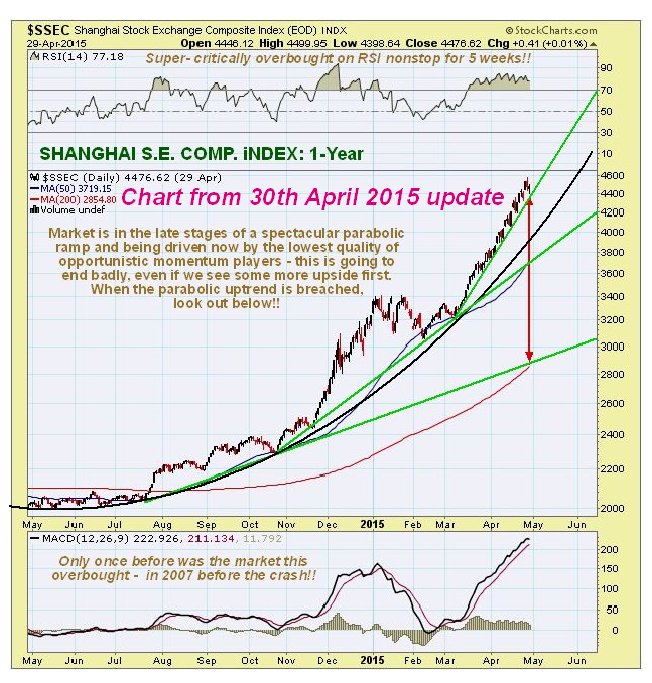 The “Big Daddy Bubble” sucked in all manner of inexperienced traders towards the top, including housewives, small shop owners, taxi drivers and even the local banana seller… 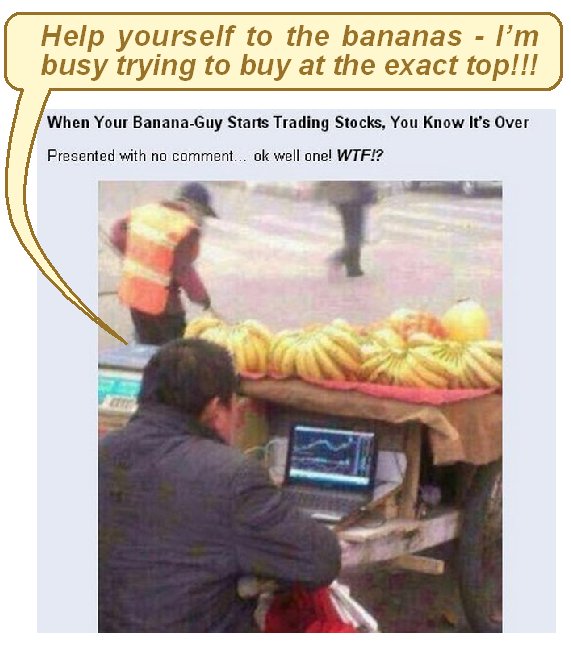 He eventually slipped up.

The 2-year chart shows us the later part of the Wok base in detail and it is very useful as it reveals that within the larger basing pattern a fine Cup & Handle formation has developed that is now approaching completion. The duration of the Handle part of the pattern has allowed time for the earlier overbought condition resulting from the sharp rise out of the Cup to neutralize and for the moving averages to partially catch up. The bullishly aligned moving averages support a breakout soon above the resistance marking the upper boundary of the pattern, which extends up to 3600. 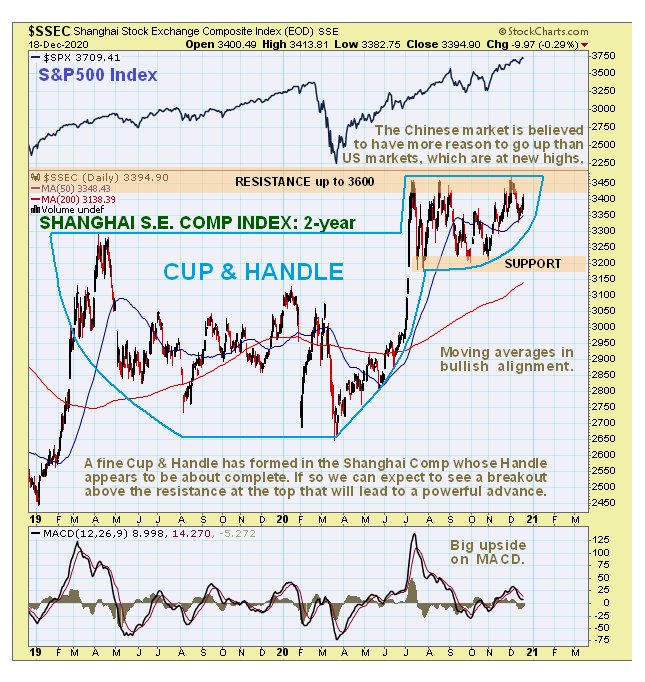 The 6-month chart enables us to see the Handle of the Cup & Handle base in detail. From when it started to develop in July it has taken the form of a Rectangle but has recently morphed into a bullish Ascending Triangle whose rising lower boundary looks set to force an upside breakout soon. 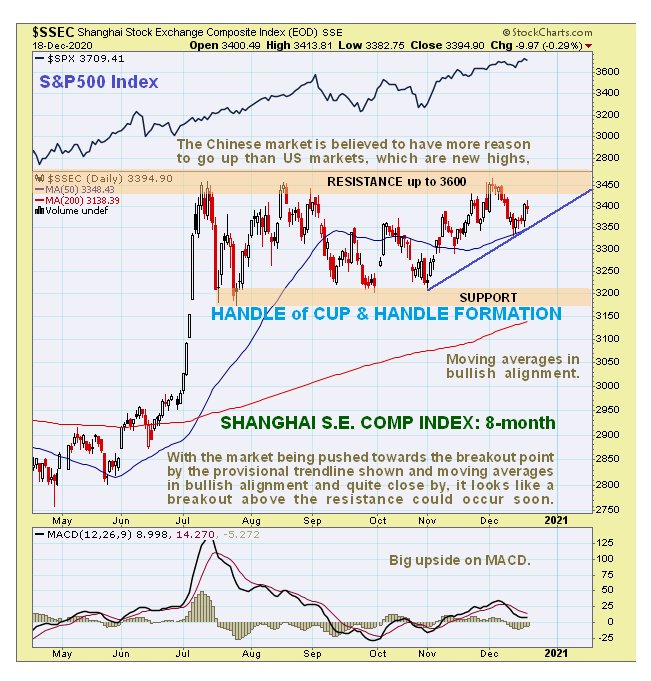 Whilst we cannot entirely rule out that the setup will abort, the most likely outcome is judged to be a breakout leading to a phase of vigorous advance, quite possibly similar to the Bubble or Son of Bubble runups shown on the 20-year chart.

Anyone wanting to play a potential big rally in the Chinese stockmarket from here using a vehicle on the US markets could consider the Direxion China Bull 3X Shares, code YINN, $19.40 but be aware that this is a leveraged, volatile counter that can be brutal if it moves against you. Fortunately, at this time it is moderately priced with plenty of upside potential if the Chinese stockmarket takes off higher as expected. 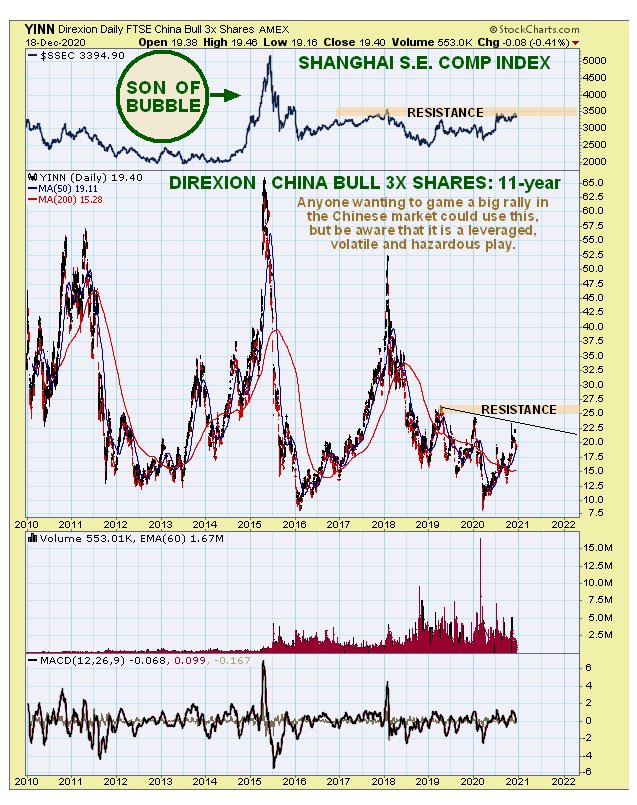