As we've been reporting for over a year, something radically snapped and changed at the COMEX in March of 2020. To that end, it's time for another update.

If you've followed the precious metals for any length of time, then you likely know that "delivery" on COMEX has always been a charade designed to impart legitimacy to the price discovered there through the trading of digital derivatives. For time immemorial, only a few contracts would ever "stand for delivery" on the bi-monthly schedule, and the participants in this warrant-shuffling game were almost entirely bullion banks. These banks would trade warehouse receipts back-and-forth in their shell game designed to create and maintain the illusion of physical delivery.

But like all games without rules, the participants eventually abused the game to the point of it breaking. EFP abuse soared in the period 2018-2020, and this was a sure sign that problems lurked just below the surface. We documented this extensively as it happened. Here are just a few links:

However, this confidence game eventually collapsed, and it all came crashing down in March of 2020. In order to restore credibility to the pricing scheme, the CME Group acted quickly to amend the existing COMEX gold contracts, and they even added a new one that—as laughable as it sounds—was actually designed to utilize fractional ownership in London bars as a delivery process!

At the time, we noted that the CME Group had, unwittingly or not, opened "Pandora's Box" and that the COMEX would never be the same. Their solution was to convert the COMEX into a physical delivery platform in the hope that, by doing so, their exchange would continue to be the world's dominant price discovery method.

The price action in the year since proves that they've been successful in bandaging the wounds, but all they've actually done is provide a Band-Aid. The COMEX is now regularly being drained and restocked of metal at a rate heretofore unseen since precious metal futures were first created in 1975.

Remember, precious metals futures contracts were explicitly designed to draw interest away from the ownership of physical metal. Additionally, the "expectation was that large volume futures trading would create a highly volatile market" that would scare off large scale physical investment. See for yourself in this cable dated 12/10/74—three weeks before gold futures began trading on 1/1/75: https://wikileaks.org/plusd/cables/1974LONDON16154_b.html

So, just how much have things changed in the past twelve months? See for yourself below. First of all, here's a typical, pre-March 2020 CME "Gold Stocks" report. This one is from late June of 2016. Note the limited categories of "gold" and eight depositories for the COMEX: 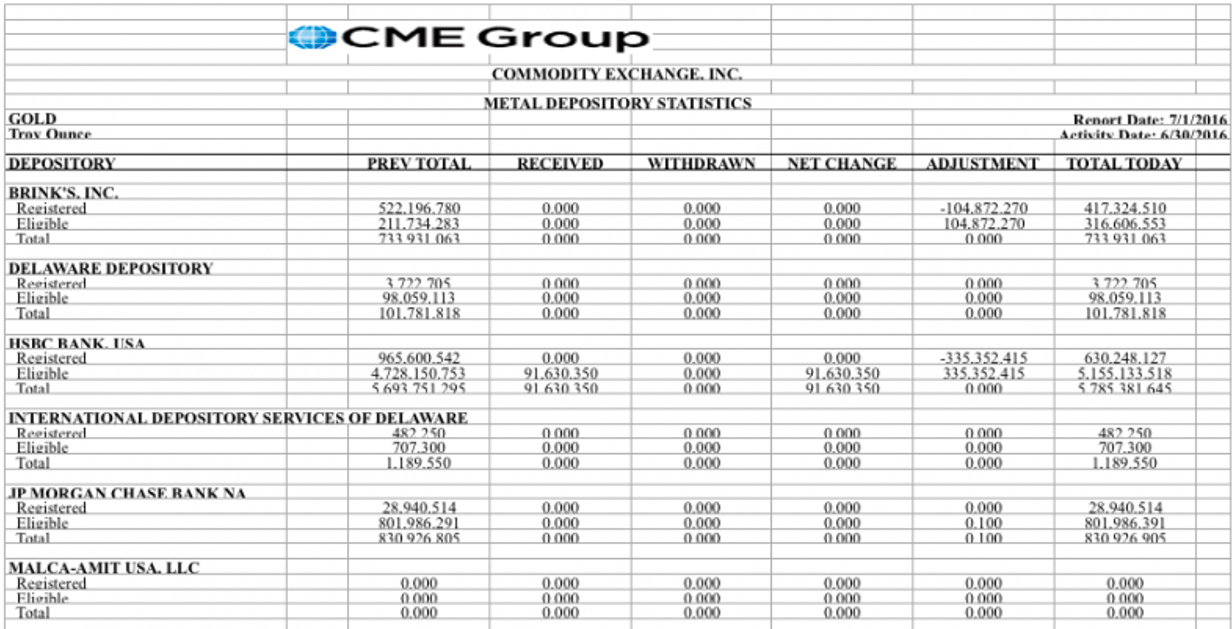 Now feast your eyes upon the most recent report, dated April 30, 2021. I'm reminded of the old adage: "The more complicated the set-up, the easier the cover-up."

And, finally, let's check the actual delivery reports so that you can get a sense of the magnitude of the change since March 2020. (Fortunately, I began saving year-end COMEX data since 2015 out of concern that it might all be lost in the ether someday.)

Remember, there are six months per year that serve as front and delivery months for COMEX gold. Those months are February, April, June, August, October, and December. Below are the totals by year. 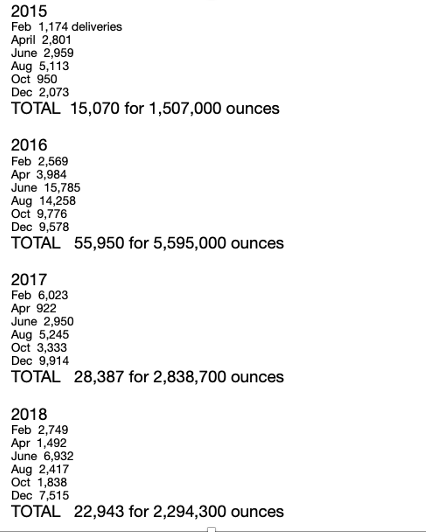 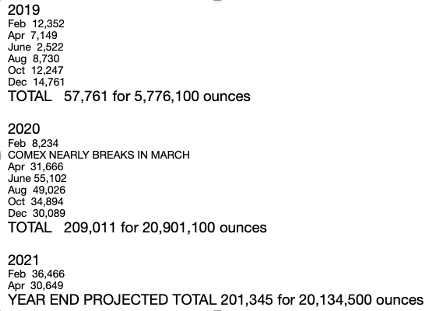 Be sure to note a couple of things:

What's my point in showing you all of this?

Again, something clearly broke in March of 2020, and the fractional reserve and digital pricing system has yet to recover. In response, the CME Group made deliberate changes to their COMEX in order to maintain the legitimacy of the price discovered there. In doing so, the entire investment world has discovered that the COMEX vaults are a place you can now turn to if you need delivery of physical metal. The delivery and daily vault stock reports prove this out.

And this will work fine...until it doesn't. The bullion banks work off of flow and not stock. Therefore, COMEX gold is subject to the same pressures and squeeze potential as COMEX silver.

Maybe next time, the hashtag should be #GoldSqueeze? Hmmm...that's not a bad idea.