If there is anything positive about 21st century finance, it's that the internet allows you to find all sorts of analysis to consider. Back in the day, you were stuck with the ravings of your commission-hungry stockbroker and his sell-side research. Today, however, those willing to seek out investment information can do so without outside influence.

To that end, it's now more possible than ever to educate the masses on sound money, monetary history and the manipulation of markets by central banks and their agent primary dealers. As this relates to the gold price, anyone with internet access can now learn about The Crisis of 1957, The London Gold Pool, Nixon "closing the gold window" and more.

You can also learn about the long-term historical drivers of price and the significant correlations that have held for decades. Two of these are money supply and real inflation-adjusted interest rates. We've used this space quite often to discuss these relationships so that's not where we're headed today.

Instead, let's embark on a short history lesson. Below is a link I found on Zerohedge last weekend. It's sourced from an organization called Variant Perception but the simplest way to read it is via the Zerohedge link:

It's a brief article and, again, it's helpful in understanding some of the basic, long-term drivers of price.

However, for today, I'd like to focus upon the final paragraph and offer this history lesson for those wanting to learn more. See below:

So, what's that "history lesson"? Let's simply focus on the final sentence of that post.

The author states "In 1975, private US citizens were allowed to start owning gold again in a macro environment of heightened inflation, so one might have expected gold prices to rise from 1975, but the exact opposite happened."

But that's it. That's where the article ends. Was there anything else that occurred in 1975 that might have caused "the exact opposite to happen"? Of course there was!

As you know, President Roosevelt signed Executive Order 6102 on April 5, 1933. This order demanded that U.S. citizens exchange all of their gold for $20.67 per ounce by May 1, 1933. From that day forward, ownership of gold by U.S. citizens was unlawful and illegal.

It remained that way until January 1, 1975, when President Ford finally rescinded the order and once again allowed private ownership of gold. So why then, as the author notes, did the gold price fall when "one might have expected (it) to rise"? The answer?

Perhaps it won't surprise you to learn that COMEX gold futures began trading on December 31, 1974.

And what was the purpose of establishing a gold derivative market? Well, that's clear. Perhaps the expected surge of physical demand could be forestalled or eliminated IF gold was now perceived as a volatile "risk asset" instead of a sound money store of wealth. You might think that's simple conspiracy theory; however, thanks to Wikileaks, we know it's actually conspiracy fact.

The cable in question was sent from the U.K. Department of Treasury to the U.S. Secretary of State, as you can see below:

You should be certain to review the entire text however, for today's post, let's just focus upon points four and five. 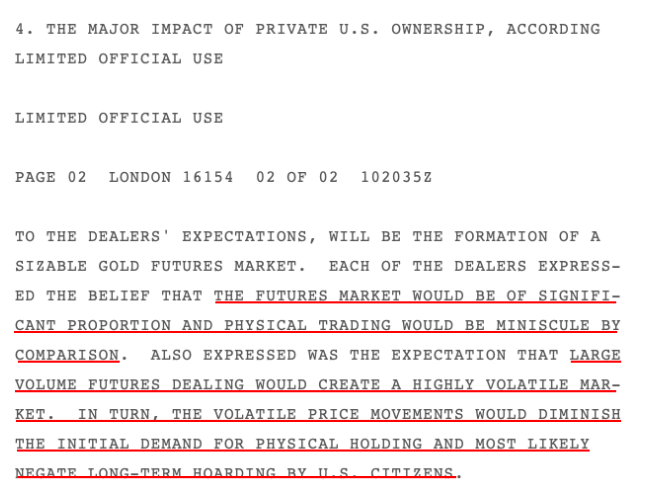 Mission accomplished, huh? And still, to this day, over forty years later! 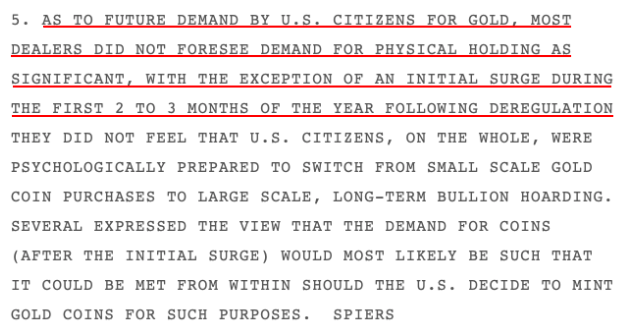 And what is the lesson in all of this? Gold is massively undervalued in 2021 due to the Bank alchemy that continues to this day. "Gold" is no longer simply physical metal. It is instead futures accounts, leases, promissory notes, options, unallocated accounts and ETFs. But ALL of these only offer exposure to price and when the day comes that the Banker shenanigans finally fail, those who placed their confidence in these "investments" will find that the only thing they're actually holding is the proverbial "bag".

Buy physical gold only. Accept no Bank-sponsored substitute. And continue to prepare for the monetary reset that is inevitably coming.