This week has been truly brutal for the entire cryptocurrency sector, with the prices of major currencies like Bitcoin and Ethereum crashing at least 30%. The overall sector has shed trillions of dollars in value.

The recent carnage for holders of digital currencies could be due to a variety of factors including profit taking spurred by Elon Musk, an easing of inflation worries, or concerns about new regulations coming down the pike.

Whatever the case may be, some of the capital that recently left the crypto space has found its way into the gold and silver markets. This trend could continue as well, with precious metals gathering strength and with Bitcoin still having plenty of room to fall further.

Bitcoin hit its lowest price since January as the People’s Bank of China has reiterated its view that the tokens cannot be accepted as a form of payment.

Since 2017, China has become an increasingly difficult adversary for cryptocurrencies and virtual products. The communist nation has banned initial coin offerings while also forcing many exchanges to move overseas. 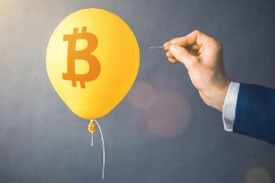 China has been known to implement capital controls as it seeks to control the ebb and flow of currency within its borders.

A cryptocurrency can make these controls impossible to execute, however, as funds can be swiftly and easily transferred overseas.

In addition to China, the Bitcoin and crypto markets have also been negatively impacted by comments from Tesla chief Elon Musk.

Tesla recently purchased a large sum of Bitcoin as Musk seemingly wanted to push the use of the currency. Tesla has, however, reportedly retracted the notion that it will accept Bitcoin as payment.

Further commentary by Musk over the last several days has only added to the confusion.

The uncertainty surrounding cryptocurrencies has provided the gold market another boost. Although cryptos may be unregulated and can act as a hedge against rising inflation or weaker paper currencies, they do not have the long, reliable history that gold bullion does.

Given gold’s timeless role as a store of value and protector of wealth, some investors concerned about long-term capital preservation are likely to reconsider their affinity digital assets and turn toward bullion instead.

Israeli warplanes pounded Gaza this week in the face of Hamas rocket attacks on Israel, and any escalation in the conflict will underpin the bull case for precious metals.

To be sure, the current economic and geopolitical backdrops – while negative in many ways – are highly positive for gold and silver. But they’ve always been a hedge for turmoil.

If you already own some physical gold and silver bullion, now may be a good time to consider adding more. For those who do not currently own any of the monetary metals, it’s hard to imagine what else they could be waiting for!