A Dis-Inflationary Whiff and Its Likely Path

Whether a bounce or something more extended, a bear market rally was bound to get off the ground sooner or later. It was a matter of time, with stock market sentiment this over-bearish.

Here is how the US Stock Market segment led off last weekend in NFTRH 706: 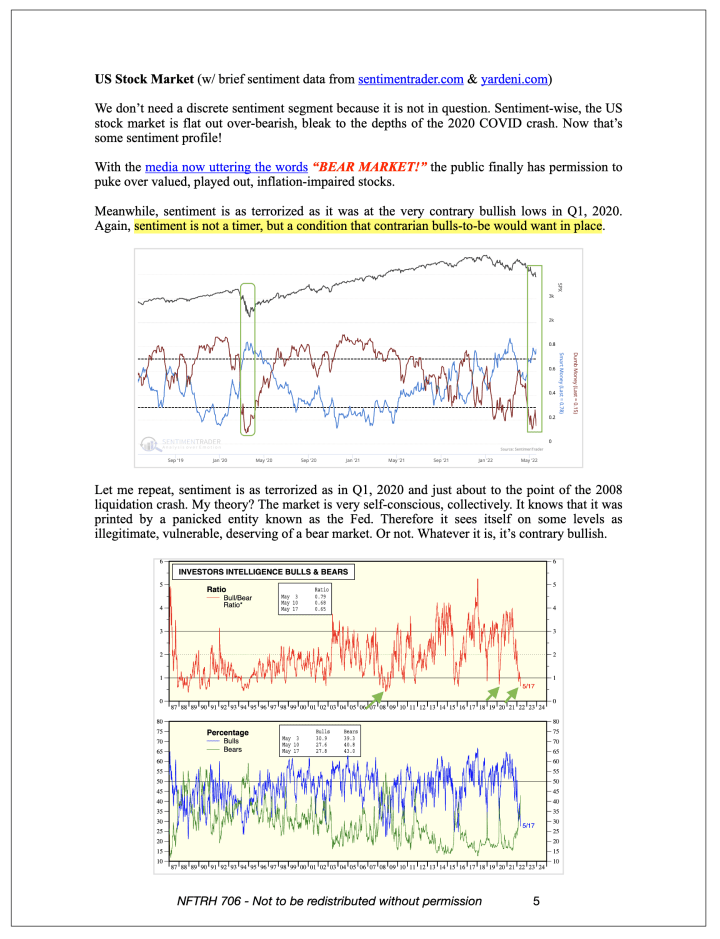 We then covered the technically bearish state of the major indexes, which are clearly trending down on longer time frames. Sentiment is a tool. TA is a tool. Macro fundamentals are another tool. These tools and others should be used together to refine probabilities in the markets.

When a proponent of one tool or indicator – especially TA – promotes that tool as the be all end all to effective market management, just know it isn’t. I say this as a TA guy myself. Several tools in the market tool box are required. Some market analysts tend to make it nice and easy for novices to comprehend (with the goal to maximize subscriptions, client lists, etc.), but it’s not that simple.

For the US stock market and many global markets, precious metals, commodities and commodity/resources related stocks that have been pressured lately the play has been broken (broad stocks) or compromised (precious metals and many commodity related items) technicals, very over-bearish (contrary bullish) sentiment and potential for near-term relief by some macro market indicators.

As to those indicators, one example on the macro, by way of Yardeni.com, is the closing of the negative divergence by the Citi Economic Surprise Index (CESI) that had foreshadowed 2022’s stock market correction. Notice how the S&P 500’s price had stubbornly remained aloft while CESI tanked in 2021. Well, the gap is closed and then some as the market plunged. 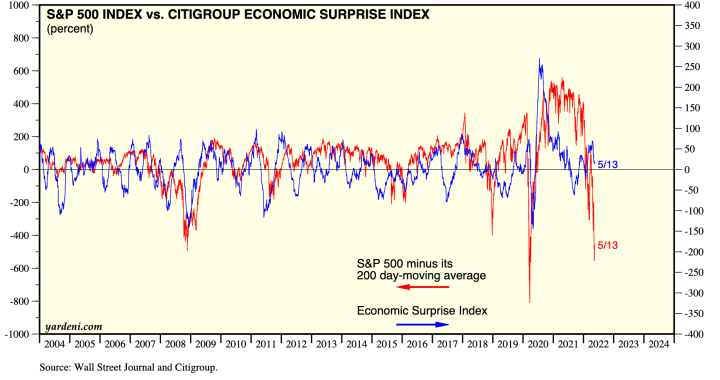 Another positive macro indicator is the recent relief in inflationary pressure. Not in the headlines or in Fed policy, which continue to breed hysteria. But in the market that gave the forward indications about inflation to begin with, the bond market. For a couple of weeks now we have been noting the inexplicable (to many) bounce in bonds despite still omnipresent inflation headlines.

Speaking of bonds, one of the most important macro indicators just happens to be derived from the bond market. The 10yr-2yr yield curve is on a fledgling steepener after inverting in April, and this time it is not due to inflation; you know, the thing that has everyone so wigged out at the moment. This post explains why a yield curve can steepen under either inflationary or dis/deflationary pressure.

Given the stock market’s broken trends but potential for a relief rally I believe a new non-inflationary steepener can be perceived at first with a sigh of relief by market participants. That could clean up any bears who’ve overstayed their welcome on the short side. But a continued yield curve steepening under non-inflationary pressure would eventually morph to the type of deflationary episode that has periodically cleared the macro of its inflated excesses.

Look no further than the 2008 mega liquidation and the 2020 flash liquidation (which jerked the Fed into steroidal inflationary action to begin with) for curve steepeners happening under deflationary pressure.

Yield curve steepening is usually associated with the bust phase that invariably follows a boom in the age of boom/bust and Inflation onDemand. If the steepening continues it will mean a bust for global markets; deflationary as noted above or worse, inflationary if the Fed has lost control and the inflation resumes, eventually to ‘crack up’ proportions. 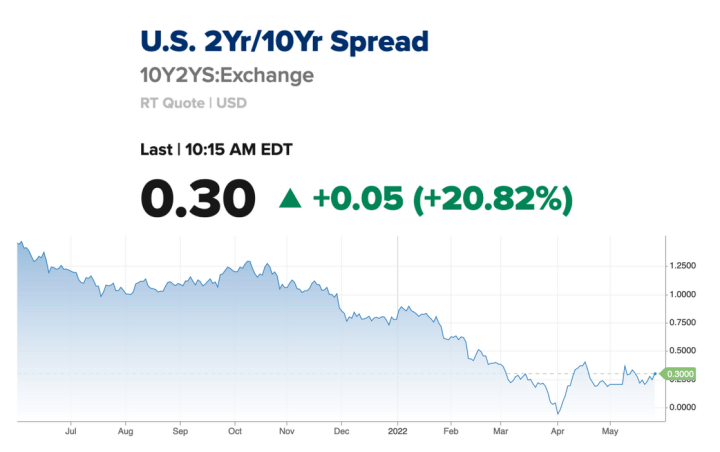 Bottom line is that sentiment indicates a relief rally amid broken technicals (for broad stock markets, with commodities and precious metals intact after taking a beating as well) as sentiment and certain macro indicators call for a potential pause in the bear backdrop.

But the larger view is for a continuation of the bear market, whether sooner or later, but at some point by Q4, 2022. Then there is the recent bearish trend of this macro indicator. High Yield (AKA ‘junk’) bond spreads are rising. It is not like everything is coming up roses at the moment.

Tactically, I prefer to stay granular about this. We managed the topping of the markets into the 2022 downtrend and more recently the bleak sentiment profile as the media blared BEAR MARKET! for Ma and Pa to puke by.

It has taken a lot of patience, but I swore off shorting a bearish market at such contrary sentiment extremes. I added, traded, stopped, started and now am positioned in the above mentioned bonds (Treasury, biased to the shorter end) and stocks in commodity, precious metals and broader spaces. Oh and given that it’s a bear market rally (mini or maxi), lots of cash, which is a position that will come in quite handy if/when the bear market resumes to finish its business of wiping out the greed printed by the Fed in 2020.

If all goes well and the current road map holds in place, there will be a time to look for no-brainer short setups. I’d like to see the rally go for more than the week the current bounce has been on, because I want to short well higher at clear setups. But whatever the market delivers, we (NFTRH) will be 100% ready because… open minded view, because… multiple tools, because… sentiment/psychology have all worked to keep us well prepared and on the right side since 2008.

For “best of breed” top down analysis of all major markets, subscribe to NFTRH Premium, which includes an in-depth weekly market report, detailed market updates and NFTRH+ dynamic updates and chart/trade setup ideas. Subscribe by PayPal or credit card using a button on the right sidebar (if using a mobile device you may need to scroll down) or see other options. Keep up to date with actionable public content at NFTRH.com by using the email form on the right sidebar. Follow via Twitter@NFTRHgt.