The ETF is a partnership between State Street, a big Boston bank, and the World Gold Council, a trade body for the industry. It has posted a 33 per cent return this year that has helped lift its value to more than $80bn. The gold rally continued late on Tuesday as the metal’s price passed $2,000 a troy ounce for the first time ever.

The size of the fund — known by its ticker GLD — puts it among the ranks of major central banks. Its holdings are equal to a quarter of all the gold held at Fort Knox in the US, more than the gold reserves of the Bank of Japan, the Bank of England or the Reserve Bank of India, and not far from China’s 1,948 tonnes of the precious metal, according to data from the WGC. 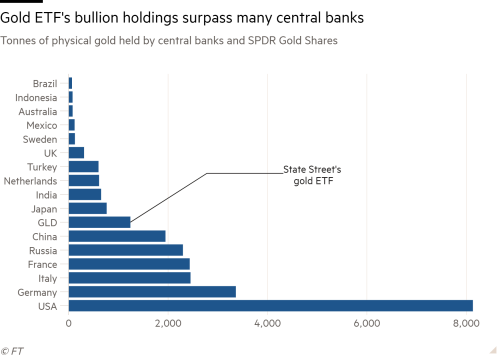