Commentaries
Gold Sentiment: Room for More Bulls
Commentaries
GoldSeek Radio - Steve Rocco: Gold and silver are energy values, 2023 to be a pivotal year..
Commentaries
China and the US at Sovereign Debt War
Market Updates
Gold the Immovable Object, but to Stocks Let No One Object
Commentaries
Growth Pains

Gold Is About Value; The Miners Are a Speculation Upon 'Value'

A pretty rock that is dug out of the ground. This heavy rock has been assigned value by humans since time immemorial. That value has been its stability as an asset, a refuge from the excesses of rampant speculation, the likes of which often visit stocks (e.g. climaxes in 2000, 2007 and 2022) and sometimes commodities (e.g. 2008, 2011 and 2022). Gold is a good proxy for money, or what money should be. A stable entity retaining value through the up and down cycles over decades and centuries.

A speculation. Ever. Hence, it is little surprise that gold so often fails to do what speculators seem to demand it do. Or at least it doesn’t do it when they are demanding it. That is because most speculators tend to lump gold with inflation and supply/demand driven commodities like copper, oil and soybeans. Why do they do this? Because they follow lazy analysis that views gold as primarily an instrument that is supposed to provide inflation protection as its #1 utility. It is not that. Not in its best suit.

Gold is for the long-term. A term so long that its history as an asset spans many centuries and is way beyond your or my ability to quantify it based on our own earthly experience. Humans just love to abbreviate their analysis into nice little easy to digest thought bubbles. Hence the herds that follow inflation touts into gold and then get burned when it fails to perform. Well sir, the failure is in your expectations, not in gold’s value.

It just sits there on its ample and heavy behind! That is all gold needs to do; be an anchor as asset speculations from stocks to commodities to crypto currencies orbit around it. In its relativity to cyclical and risk ‘on’ assets gold is a measure of other assets in motion. Little more.

When speculative asset markets are going up gold’s real price (as adjusted by those markets) tends to go down, regardless of what its nominal price is doing. That has value because it helps us gauge the ‘value’ levels that humans are assigning to it at any given time. That in turn helps us determine the confidence levels of the herds. Gold relatively weak = higher confidence in risk ‘on’ markets and the policymakers behind them. In short, gold’s ratios to other markets helps us determine the macro investment climate.

Why else is that of value? Because this same monetary anchor also works the same way in reverse, when asset bubbles are popping. The real price of gold rises when things fall apart in cyclical areas, regardless of whether or not its nominal price is rising.

Gold’s value, other than as a long-term ‘savings’ account, is as a barometer to the times. For example, the long correction from August 2020 through 2021 was reflective of the boom in inflated cyclical commodities and stocks. While we have accurately anticipated the summer 2022 relief rally in stocks the bigger picture – if the bear market maintains its grip as anticipated – is for the end of the latest bubble instigated by the Fed. Also reference these post-CPI thoughts on the matter.

How the miners leverage gold’s standing in the macro 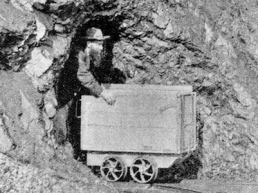 It’s as simple as operational efficiency and psychology.

Gold’s ‘real price’ rises during or into an economic bust. Look no further than 2000 and 2008 (vs. stocks) and 2008 and 2020 (vs. commodities). The lows in gold’s relative prices during those phases also saw important lows in gold mining stocks prior to bull markets and/or strong rallies.

Why did the miners perform so poorly from mid-2020 despite the booming inflation trades? Because the miners were leveraging gold’s standing within the macro. That standing was relatively weak and so the gold stock correction – to the bewilderment of a majority of inflation centric gold bugs – was completely normal and logical.

Why, for example, did gold stocks explode upward in late 2008? Because they had crashed immediately prior while their fundamentals (gold/stocks, gold/oil, gold/copper, gold/CRB among other signals) were exploding higher. Most people did not see it because gold was still correcting in nominal price terms but beneath the market’s surface its ‘real’ price was exploding upward. Here a hat tip is due to Bob Hoye, who is the analyst most focused on gold’s ‘real’ as opposed to market price.

I count Bob as one of my influences early on (spanning back 20 years). Among other things, I learned from him just how tragically wrong a majority of gold bugs are so much of the time and importantly, why. Analysis about gold’s ‘real’ price simply does not fit in the nice neat little box that many gold promoters want to present to their herds.

Back on message, as one example of gold mining operational efficiency benefiting from a rising ‘real’ price, if gold (product) is rising in relation to crude oil (important mining cost driver and cyclical commodity) the benefits to gold mining bottom lines are automatic.

As an example of psychological benefits, if gold is rising vs. stocks then it is only a matter of time before a critical mass of , err, that is conventional stock market investors will take notice and position accordingly. Since we got an unwitting top call from none other than Warren Buffett and 3 luminaries of the gold  community in mid-2020 the psychology has not been favorable. If as expected, gold reasserts its relative standing as the current broad market relief rally flames out in the coming weeks then the time will be right for the miners to leverage that situation.

There does remain an open question about the effect that a broad bear market resumption may have on the miners, but generally speaking a new phase would begin for the gold mining industry if we are correct about a resumed bear market in cyclical and risk ‘on’ stocks and commodities.

Regardless, we have projected a relief rally in the miners right along with Tech/Growth stocks and some commodity segments. This bounce will be subject to the same shorter-term trading rules as during a gold stock bear market when things get overdone emotionally and overbought technically. But in general it is time to anticipate the potential of a longer-term bull market if/as the Fed’s latest bubble du jour, panicked into existence in 2020, continues to deflate.