Indeed Gold settled yesterday (Friday) precisely at 1923, its first weekly settle above 1900 since that ending 22 April. Is this finally the squashing of those who arguably suppress price? Are portfolio managers actually beginning to add Gold? Let's take that which we can get and straightaway go to Gold's weekly bars from one year ago-to-date, the current blue-dotted parabolic Long trend continuing its ascent whilst from the "Play It Again Sam Dept." we re-spin "Hey Nineteen..." --[Steely Dan, '80] 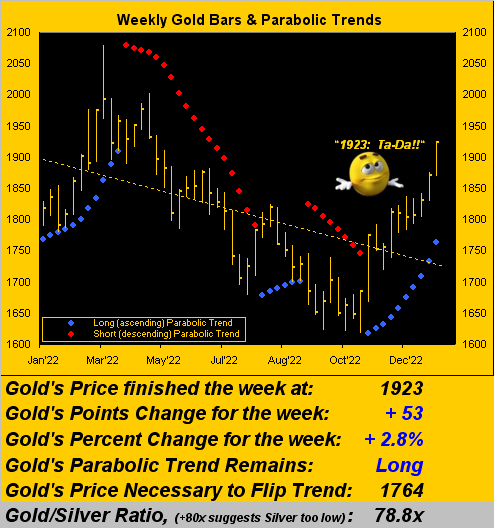 And importantly: let's talk VOLUME. Friday's Gold contract volume (COMEX 265,174 cacs) marked not only the most traded by day in the young year, but the largest amount for any single day since 16 November. Moreover on a weekly basis from all of 2022-to-date, this past week ranked second-greatest in volume only to Gold's RUS/UKR spike n' fade trade in March of a year ago as made evident below in the left-hand panel. Further in the right-hand panel across the same time frame is Gold's cumulative moneyflow, (which as you know = volume x price change): the key takeaway there is Gold's monetary inflow from October to today is steeper than its outflow from the war's onset to October. And as we've pointed out in the past, unlike other markets which tend to fall faster than they rise, Gold's tendency is to rise faster than it falls. This is a fairly strong picture, especially should the resistive 1800s start to morph into support when tested:

Whilst we remain "off the table" for forecasting Gold's high during 2023, here are some key levels in ascending order to keep in mind:

And upon exceeding 2089, the sky becomes the limit for Gold (enter the Fib Brigade). As detailed a week ago, should Gold's EYTR ("expected yearly trading range") be traced and the low (1830) already be in place, then we'll see 2176. 'Course there's the "well-out-of-range" Gold Scoreboard debasement valuation of presently 3874. But as also noted in our year-end missive, a repeat of Gold's 1979 performance of +137.1% places price this year at 4339. Again: "Never Say Never Again" --[Taliafilm/Warner Bros., '83].

Nonetheless from the "Keeping Our Feet on the Ground Dept." 'tis not just Gold getting the New Year bid; rather 'tis the BEGOS Markets at large. Here are the respective percentage tracks from one month ago-to-date (21 trading days) for the five primary BEGOS components. Note from the vertical year-to-date line the bias is basically up, (albeit Oil had a slippery start before recovering): 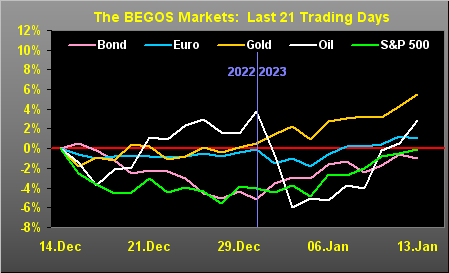 'Course it follows whenever we note such positive togetherness amongst the BEGOS bunch that obviously (without even looking) the Dollar must be down. So let's look: from 2022's settle, the Dollar Index is -1.3%; the Ugly Dog Contest continues...

Speaking of ugly, next up (or better stated down) is the Economic Barometer. The week's highlight was December's CPI headline number coming in with a negative month-over month change of -0.1%, indeed the first such negative shift since the 2020 March-though-May COVID shrinkage. BUT: ex-fuel and food, December's change was +0.3% which was more inflationary than November's rise of +0.2%. Too, 'tis the fifth occurrence in the past six months wherein the Core CPI reading was greater than the all-in number, a pattern similar to what we witnessed during both the S&P 500's 2020 COVID correction and the 2008/2009 FinCrisis. Ready to repeat?

Worse: good ol' Joe Six-Pack doesn't even see it coming, at least by the University of "Go Blue!" Michigan's Sentiment Survey. Its initial read for January of 64.6 made quite the leap from December's 59.7, indeed the highest reading since April's 65.2 level. And with the S&P already up +4.2% this year, "Life is great, the worst in abate!" (Pssst: the "live" price/earnings ratio of the S&P settled the week at 38.8x and Q4 Earnings Season is off to an inconclusive start with four of the nine S&P constituents having reported lower bottom lines than in Q4 a year ago). But let's not spoil the party: 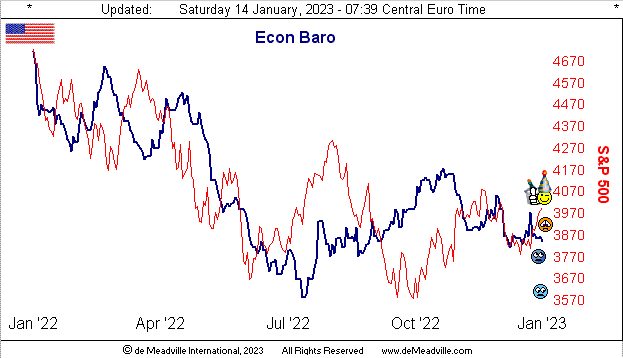 Meanwhile, the World Bank has nearly halved its projection for this year's global economic growth given persistent inflation. Back in June, the Washington-based institution called for +3.0% growth in 2023; however, the revision per last week's release of their Global Economic Prospects report now puts it as +1.7%. Specific to the States, the key number for which to watch is the 26 January release of Q4's Gross Domestic Product. And per the 120 Econ Baro metrics thus far essentially gathered for Q4, the GDP may return to negativity ... we'll soon see.

But positivity is all Gold right now. Here next we've paired the yellow metal on the left with the white metal on the right by their daily bars across the last three months-to-date. And although both metals' trends for the stint are up, the strength really lies in Gold per the baby blue dots of trend consistency gaining ground, whereas those for Silver have rapidly been running out of puff. Hence the Gold/Silver ratio, which back on 20 December was 74.9x, is now 78.8x (as noted in the aforeshown weekly bars graphic): 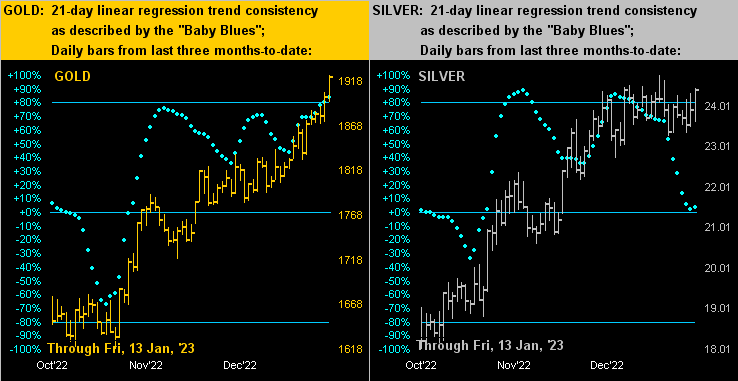 Then we've the 10-day Market Profiles for both Gold (below left) and for Silver (below right). From low-to-high, Gold's range spans +5.8% and Silver's +6.5%, even as the latter's noted consistency is lacking that of Gold. That in turn reminds us that Sister Silver's upside percentage potential as historically exhibited is vastly greater than 'tis for Gold. Still for the present, both Profiles look healthy with underlying trading supports as labeled: 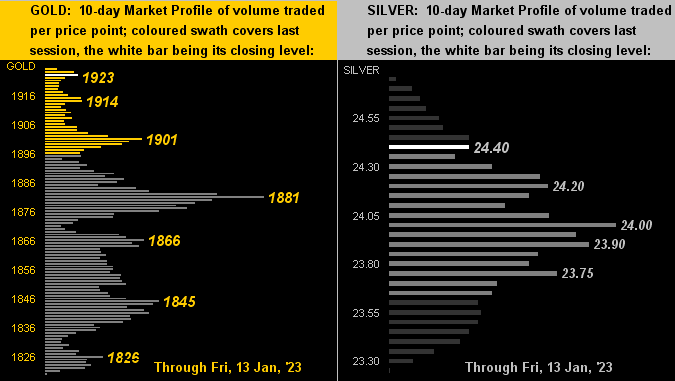 With Gold rallying on superbly supportive volume, we'll wrap it for this week with these three musings:

■ Whilst swerving through Sweden at the invitation of Sveriges Riksbank, Federal Reserve Chair Powell again emphasized his Bank shan't get involved in making policy with respect to "climate change". To be sure, with monetary control becoming ever less so, 'tis unfathomable to even consider climate control. Or to quote the late, great George Carlin: "The planet isn't going anywhere ..... WE are!"

■ From the "ME! ME! Dept." came a near quadrupling in the stock price of one Bed Bath & Beyond (BBBY) this past Monday into Thursday. As the financial screws continue to tighten across markets, it remains "beyond" us as to why folks pour money into something that not only earns nothing, but appears by trend swiftly destined for 0 ("zero"). Again we suggest that one is better off playing the dozens/columns on a single zero roulette wheel (which when selecting two of three gives a 64% chance of winning the spin) than taking chances on something worth nothing. Not just incredible, but a finger-post to just how nasty this next stock market correction can be given the proliferation of know-nothings in this Investing Age of Stoopid.

■ And it wouldn't be January without the James Bond villain-like "world-dominating wanna-bees" returning to the World Economic Forum's annual meeting in debonair Davos, their private jets covering the tarmac at nearby Samedan Airport. But will any Goldman-Sachs invitees have to come instead by commercial air and then connect using the Schweizerische Bundesbahnen? After all, GS (in addition to now cutting its workforce by some 8%) has put its expenditures on private jets under review... "Uh yeah, mate, you'll find Davy down in the dining car..."

Regardless, 'tis not too late to dine on more Gold! 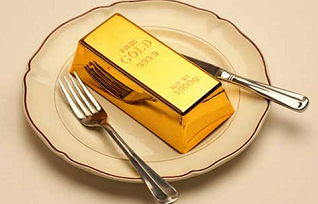