Well, well, well. In a year during which Gold at large was hyped to the moon, it actually finished 2022 essentially "unch" (front-month COMEX points basis) in settling yesterday (Friday) at 1830.1 ... whereas one year ago Gold settled 2021 at 1830.5. Thus its net move for the year of -0.4 points was Gold's smallest annual change since Nixon's nixing of the Gold Standard per his live television appearance on Sunday, 15 August 1971. And obviously all of us remember exactly where we were and what we were doing at that most seminal moment when suddenly the convertibility of this ended: 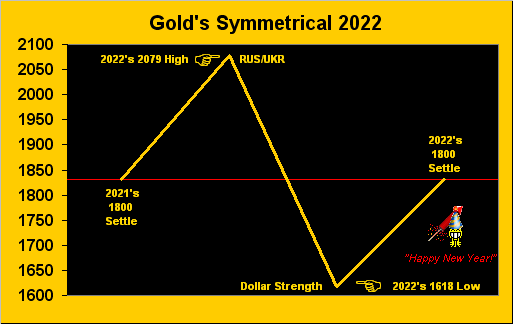 Therefore: given Gold's year-over-year net trend being as literally flat as une crêpe française, how do we forecast a high for 2023? Linearly we don't. By regression channel across the past 50 years the unimpressive 1900s show at best. And as for uncharted territory above Gold's All-Time High (2089 of 07 August 2020) that's for the Fibonacci-obsessed. This leaves us with the opening Gold Scoreboard's valuation of 3881 which realistically to reach in a single year is "out of range" vis-à-vis the rest ... albeit with a tip of the cap to this historical exception: from 1978's settle at 229, the price of Gold during 1979 reached as high (in December) as 543 for an increase of +137.1%: repeat that percentage performance during 2023 and Gold taps 4339, sufficiently in excess of the Scoreboard's current 3881 valuation. Thus just in case yer scorin' at home on this New Year's Eve: "Never Say Never Again" --[Taliafilm/Warner Bros., '83]

Indeed were that to actually occur in 2023, we'd likely repeat what we've not stated since 2011 about "Gold having gotten ahead of itself". But wouldn't it be lovely. Regardless, should the Gold trade continue as arguably suppressed by those schemingly shifty sovereign/central bank scalawags, 'tis presently unwarranted to make a forecast high for 2023, (our having missed the mark for a price of 2401 in 2021 and for an even more conservative 2254 in 2022). And yet should "they" at some point decide to release the hounds, just make sure you've "Got Gold!"

Whilst Gold's non-performance remains an annoyance, the stock market remains on the road to destroyance (a little poetic license there). From the "A Picture Tells A Thousand Words Dept." we've updated for the S&P 500 two of the most salient, telling -- indeed scary -- graphics ever produced.

First, had COVID never occurred, the S&P (today 3839) would likely be sub-3000 with no one the wiser as to how still great that would be. Remember: the post-COVID increase in the market capitalization of the S&P is equal to the panic-printing increase of the U.S. ("M2" basis) Money Supply, (which for you WestPalmBeachers down there means the Federal Reserve didn't really have to create one red cent): 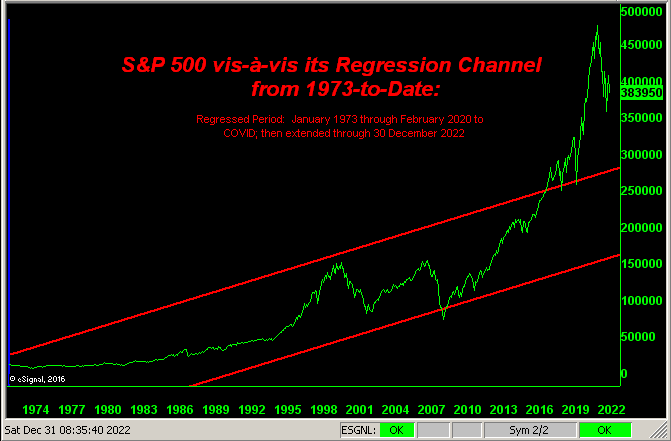 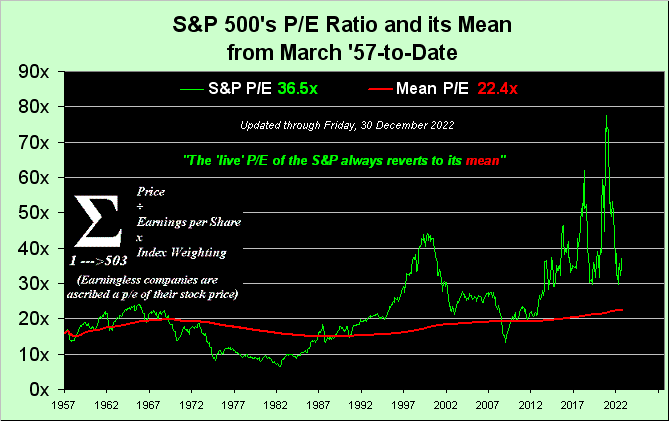 Moving ever so spritely along, not only is it month-end, but year-end as well. Here thus is the finally tally for our BEGOS Markets in 2022. Note therein, regardless of the Bond being in the basement, barring a U.S. Treasury event of default, you'll get yer dough back: "Jay honey, this is Janet. I again have a developing situation...": 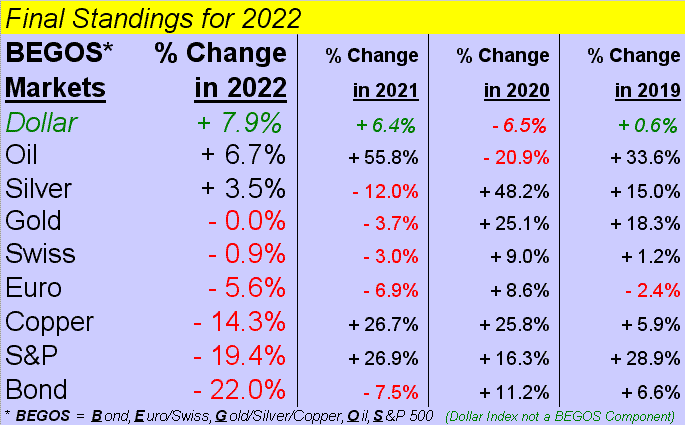 Specific to Gold we've next our year-over-year chart by the weekly bars. Despite price's "unch" stance for the year, the dashed regression line nonetheless is negative given price's comparatively steep decline from the RUS/UKR war high (2079 on 08 March). Still, the present parabolic Long trend has printed its rightmost eighth blue dot as price works to right the regressive ship: 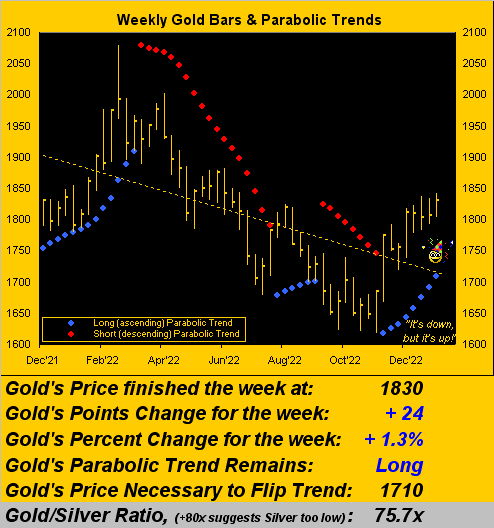 As for the precious metal equities' consorts, only Gold itself is at the 0% change level from this week a year ago. The percentage tracks for the balance of the bunch are: both Franco-Nevada (FNV) and Agnico Eagle Mines (AEM) -1%, the VanEck Vectors Gold Miners exchange-traded fund (GDX) -10%, both Newmont (NEM) and the Global X Silver Miners exchange-traded fund (SIL) -23%, and Pan American Silver (PAAS) -35%. But given that Silver can outpace Gold on a material upside run, as we've on occasion quipped in the past, "Don't pass on PAAS!": 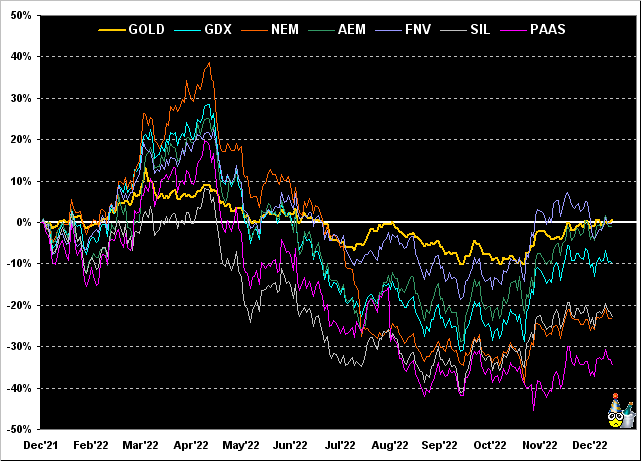 As to the StateSide economy, here's the final look at our Economic Barometer for 2022. Just three metrics came in for the year's final week, of note therein: the December Chicago Purchasing Managers' Index had a good gain from 37.2 to 44.9, but its still being below 50 is contractive; and pity the poor housing market as November's Pending Home Sales recorded their 12th contraction in the past 13 months. Here's the whole picture along with the S&P 500's floundering red-line flight. It does give one that sinking feeling, the notion of a "happy" new year for equities looking doubtful at best for 2023: 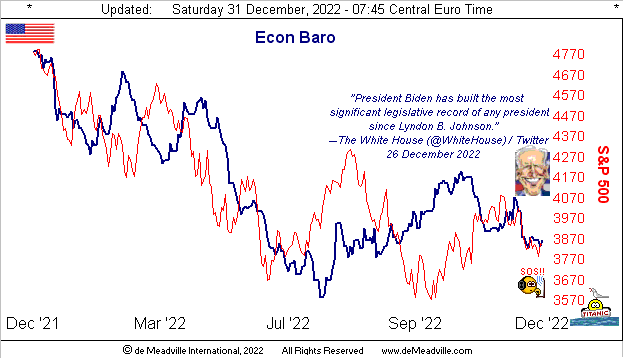 Sinking, too, by their respective 21-day (one month) linear regression trends are the Bond, S&P 500 and Copper as we go 'round the horn for all eight BEGOS Markets. The baby blue dots depict the consistency of each diagonal grey trendline: 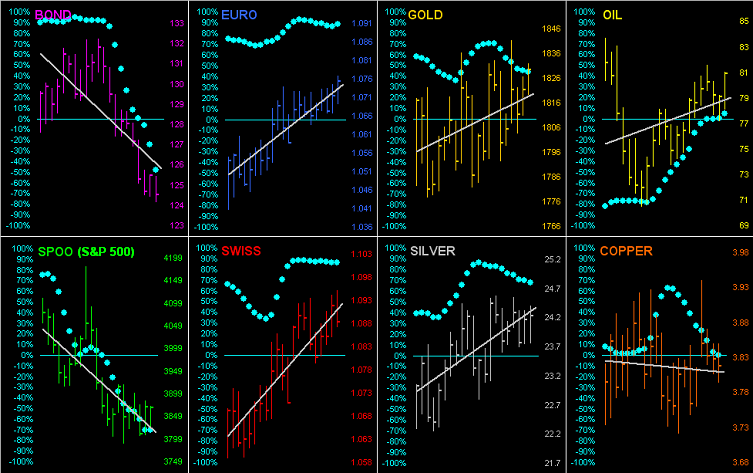 As to the below 10-day Market Profiles of the precious metals both for Gold on the left and Silver on the right, they climbed up the ladder in this final week to complete the year. The labeled prices are those having traded the most volume across the past fortnight: 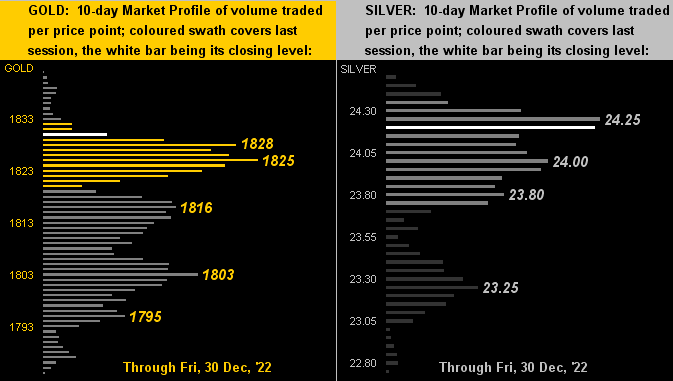 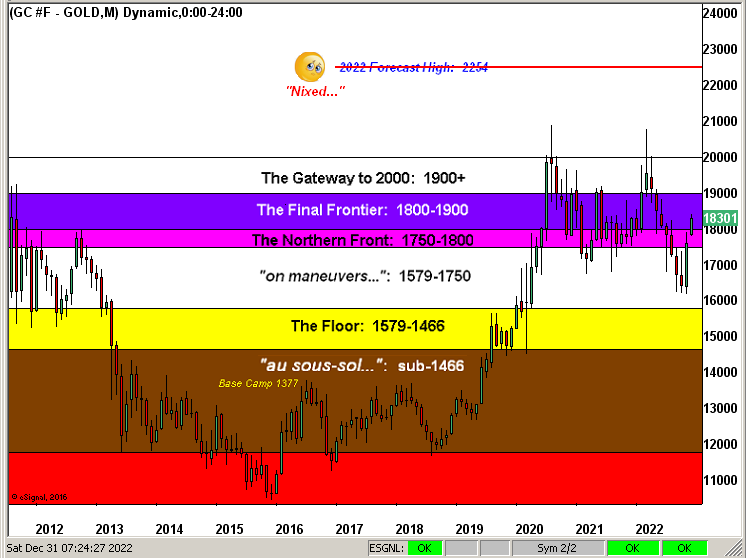 But we can state "diabolical" all day long: most importantly, Gold is CHEAP!

And best of the New Year to you as well, Squire. Where in the world are you now?

"Still in the Tirol, mmb. One more ski run for this year and we're done."

In summary toward 2023, as earlier inferred we're hesitant to make our usual forecast high for Gold. But should the constricting malaise reach the end of its phase and Gold reach beyond its highest of days (i.e. above 2089), we can have a wealth raise that goes a long ways ... unless you don't own Gold and are left agaze.

For in commenting on Dow Jones Newswires that "Persistent inflation and the market selloff are humbling investors as they look to the new year", your getting some Gold shall allay all that fear! 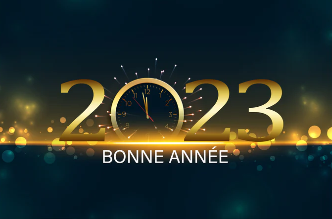