One of the great cash management challenges in this business of engaging in the world's most important financial markets, (our BEGOS bunch being the Bond, Euro, Gold, Oil and S&P 500), is the immediacy of their being affected by fundamental surprises, whether horrendous or wonderful. And happily in this case, (barring your having been out on Uranus this past week), obviously 'tis been the latter. For in just barely four trading days time (05-10 August), if you were spaced-out, you missed the following:

■ the recession was vanquished via explosive jobs growth;

■ and as one headline via Washington DC succinctly stated, "Climate Change Has Been Solved".

Honestly, this triumvirate of Great StateSide News ranks up there in the rarefied air of Neil Armstrong setting foot on the moon (21 July '69) and the Chicago Cubs winning (after 108 droughtful years) the World Series (02 November '16).

'Course, you valued readers know these three bullet-pointed miraculous achievements are all horses**t; ("Can we write that Mr. Publisher?") To wit:

■ the "explosive" growth in jobs (+528k) was accounted for by the addition of a second payroll for folks already on existing payrolls such as to mitigate the effects of inflation, (i.e. two jobs are better than one); indeed the so-called "labor force participation rate" actually fell in July from 62.2% to 62.1%; and as you herein read a week ago, total "Initial Jobless Claims" for July ranked second highest year-to-date, (January having the most);

■ assuming that you neither ate nor used energy during July, the cost of "everything else" went up. And yet that which you did eat and that into which you tapped likely cost more anyway: nobody of whom we know saw their box of Cheerios nor utility bill decrease in cost, albeit we're told California gasoline has come off a bit.

■ and of course "Climate Change" never shall be solved (recall Michael Crichton's "...if we are gone tomorrow, the earth will not miss us..."); hardly can the great scientific minds even get the three-day weather forecast right.

So maybe not so great...

Anyhooo, that's our intro for this week. Yes, this is The Gold Update but given price's being range-bound, what can one say? The 1779-1854 resistance zone continues to entrap Gold from going anywhere, price settling out the week yesterday (Friday) at 1819 on little trading interest: of the 32 weeks year-to-date, this past one was Gold's 13th least active by contract volume traded. Nobody cares, and until they do (and they eventually will), Gold sits stuck in the bus station

Gold's effectively inactive state is well-depicted per this graphic of price's "expected daily trading range" (EDTR) from one year ago-to-date, quietly in decline as the "Dog Days of August" unfold: 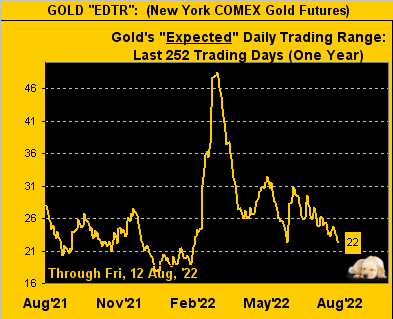 "But why all the cold water, mmb? Gold's gone up for four straight weeks..."

Indeed, Squire, so much so as to have flipped the weekly parabolic trend to Long as we saw a week ago, a second blue dot now on the graphic: 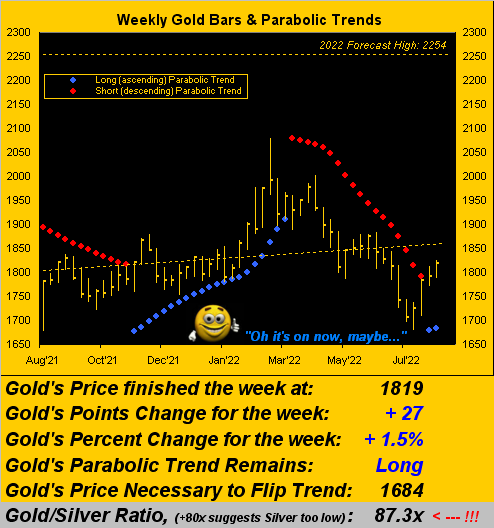 Moreover, we've ideally seen Gold's low (1678) for the year, (decade, century, forever). Yet as we periodically caution: change is an illusion whereas price is the truth. And whilst we applaud the rising look in the above graphic, today's price of 1819 (first achieved on 18 August 2011) is a far cry (-56%) from today's opening Gold Scoreboard valuation of 4118.

Oh to be sure, one bemoans the Dollar continuing to win The Ugly Dog Contest in defiance of Economics 101, today's axiom instead being the greater their quantity, the more they're worth. But there's a lot of bad stuff goin' on out there, not the least of which is the PRC eying Taiwan ("Get 'em while the West is weak!"), the attempted murder of a controversial elderly author in the Empire State, and RUS' sprinkling of missiles in recent days 'round UKR's nuclear plant at Zaporizhzhia, (purportedly the largest one on the Continent). Is this the glowing civil society of the 21st Century? Got Gold?

However, the truly glowing news is the stock market's rocket recovery by the aforementioned itemized boosters: recession over, inflation done, planet saved. With just 87 calendar days in the balance until the vital U.S. mid-term elections, one can already discern the clarion cry to "Vote Early! Vote Often!"

And as for corporate earnings, who needs 'em when you've got all that great news? From its mid-June low, the S&P 500 has risen 18%. And now with but one week to run in Q2 Earnings Season, of the 435 S&P constituents having reported, 62% have bettered their Q2 bottom lines from 2021. But across the past 21 quarters, that ranks seventh-weakest for improvement. Too, from the website's page for the S&P MoneyFlow, it has been deteriorating whether by the weekly, monthly or quarterly measures, (that won't be on FinTV). And for nearly a month (since 19 July), the S&P has consistently been "textbook overbought" (we'll spare you the details). In addition, the S&P futures settled the week 373 points above their smooth valuation line (see the website's Market Values page). That is a deviation of historic extreme.

Regardless, frolicking in the froth are today's equity buyers. Still, with the S&P at 4280, the 3600-3200 support zone awaits its test. (...tick tick tick goes the clock, clock, clock...) But wait, there's more: given this relatively weak Earnings Season, our "live" price/earnings ratio for the S&P settled yesterday at 38.5x: that is +61% above the lifetime mean (since 1957) of 22.4x. As well, the yield in the U.S. debt market is essentially double that of the S&P, and you receive par value at expiry. Think about that; (your money manager may not have). And next month is September... (That is likely lost on the low information, short attention span, instant gratification crowd that probably can't read this deep into a missive anyway).

Speaking of deep, perhaps the Economic Barometer is curtailing its recent bounce from the year's low; consensus looks for the Baro to further weaken net-net through next week: 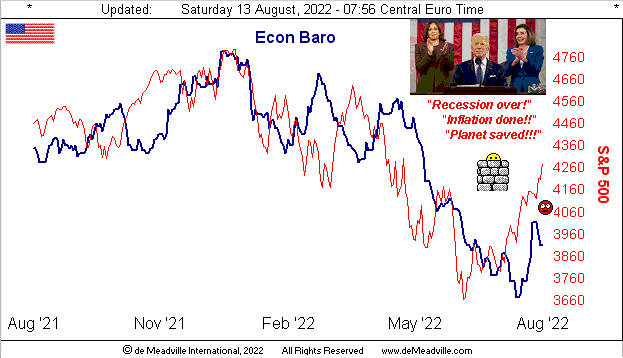 One notable metric amongst the past week's incoming lot of 12 was July's Producer Price Index: the headline number was a deflationary -0.5%. Shall that lead August's CPI also into the deflation zone? (The summer interns must be having a field day over there at the Department of Labor Statistics).

As to the metals' trends, here we've our two-panel chart of Gold's daily bars for the past three months on the left, with those for Silver on the right. Both paths continue as fairly identical, which means that Sister Silver is adorned in her precious metal pinstripes (rather than in her industrial metal jacket). Indeed the "Baby Blues" of trend consistency having topped their respective +80% levels are supportive of the positive trends. The structural issue, however, is all that pricing congestion for both Gold and Silver in the left-hand portions of their panels. Either some sound, fresh fundamental buying comes to the fore, else the "M Word" crowd and weak Longs can shove price back down to the floor: 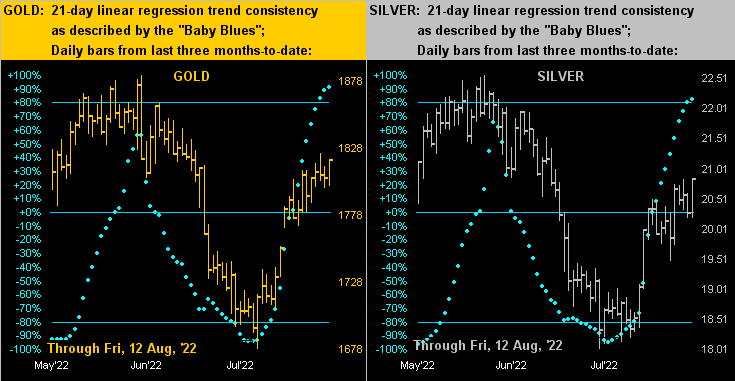 So in turning to the 10-day Market Profiles for the yellow metal (below left) and the white metal (below right), their protective price bellies are respectively bulging in the low-1800s and above 20. But if contract volume stays on a diet, near-term we can see price loss back to 1790 and sub-20: 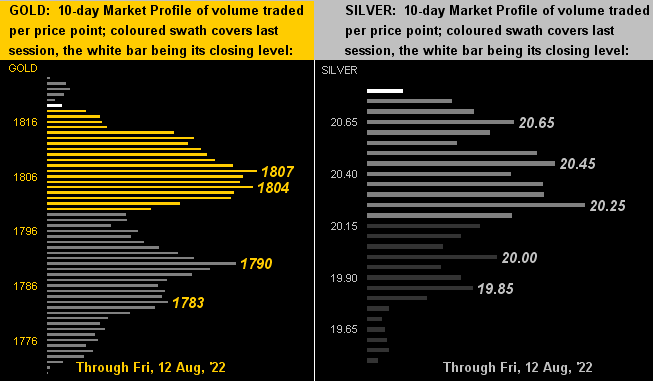 In sum, Gold is moving higher, albeit at a rather sedate rate given that everything else (so we're told) is great. Upon Gold's eventually getting above these 1800s -- which have traded in each of the past 16 months inclusive -- price still then must master the congestion of the 1900s. Again, 'tis going to take good old-fashioned buying muscle, including commitments by money managers to add Gold to clients' portfolios, furthered in turn by "the herd" getting the word to "pile-on" during the Gold popularity contest, (and in turn perhaps expunge the "M Word" crowd). For as stated at the outset, fundamental surprises can affect our major markets in a very fast way. We thus trust you're already aboard the Gold Railway! 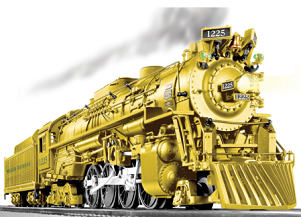