Gold Price Smash in Paper – But Physical Demand on Fire

On Sunday evening 8 August at 6:00pm New York time, as the trading of gold futures contracts commenced for the week and the COMEX GCZ1 December 100 oz gold futures contract opened at $1765 per ounce, there was nothing in the market or in wider macro news to suggest that the gold price was about to witness a sudden drop of $87 or 5% to a low of $1677.9, or that 90% of that drop would be in a 12 minute period between 6:45 pm and 6:57 pm when the gold price fell by 4.93% on huge contract trading volume.

From a macro perspective, nothing had changed over the weekend, and all news that could arguably have affected the gold price, such as market unease about the US Fed moving to taper QE and asset purchases, was already reflected in the price. 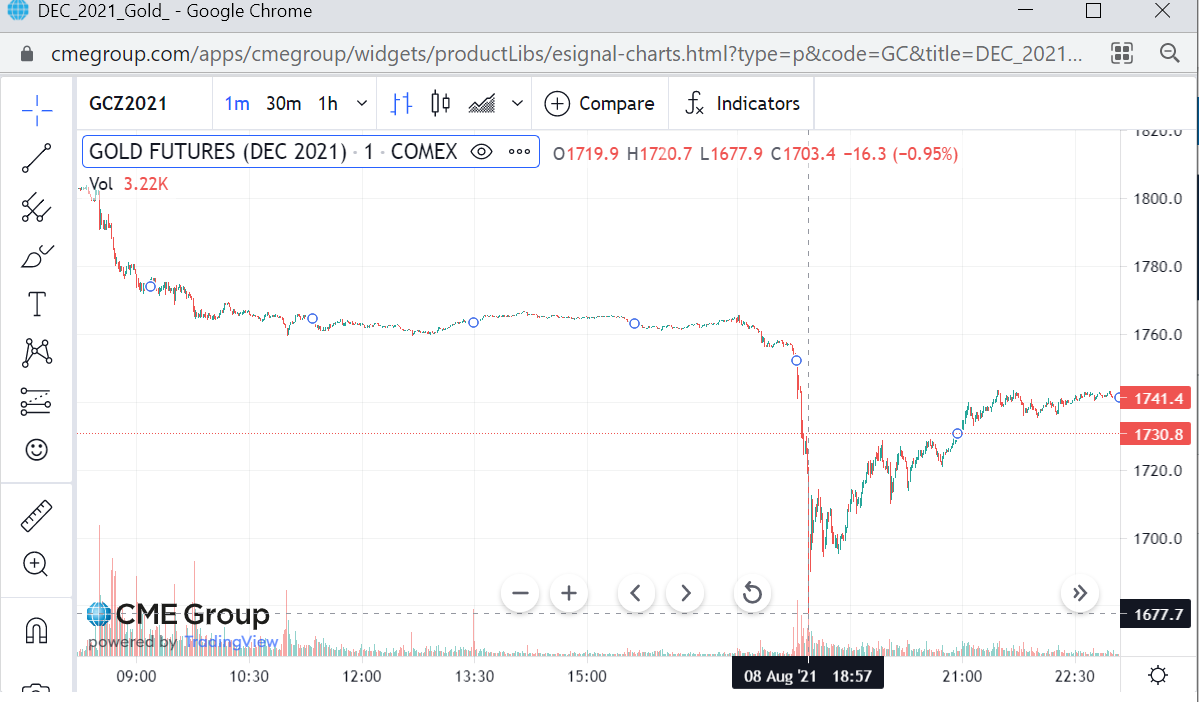 On the previous Friday, August 5, the gold price on COMEX had wrapped up the afternoon at $1763.5 after meandering tightly in the $1760 – $1765 range for the previous 7 hours. Earlier on Friday morning had seen ‘higher than expected’ US non-farm payroll data for July, with the narrative wheeled out to those naïve enough to believe it that this could trigger ‘early’ Fed tapering and higher interest rates. Spoiler – The Fed can’t taper.

Before looking at the Sunday evening orchestrated plunge, the key point to remember is that the Friday morning data and how it was digested, was already embodied and reflected in the gold price by 10am on 5 August, and there was no volatile price action in the COMEX gold price over the next 7 hours up to 5pm Friday afternoon New York time (when trading halts for the weekend).

As everyone knows, Sunday evening opening hours in COMEX trading New York time (corresponding to Monday morning Asian hours), is a time of thin trading and illiquid markets relative to the Monday to Friday New York mornings when the ‘main event’ of precious metals trading takes place. Additionally, it is currently August, and due to holidays and vacations, far less market participants than normal are at their desks, and furthermore, two of Asia’s main gold trading hubs were on holiday. Singapore had a national holiday on 9 August for Independence Day. Japan had a national holiday on 9 August observing Mountain Day.

So would Sunday evening 8 August New York time be a good time to sell thousands and thousands of front month gold futures contracts over a few minute period if the sellers were rational profit maximizing traders. Of course it would not.

Which is precisely why said sellers of thousands and thousands of December 2021 gold futures contracts decided to execute their trades on an August Sunday evening (Monday morning Asia time) during thinly traded hours when New York and London were closed, and where two of Asia’s largest financial centres, Singapore and Tokyo, were on holiday.

Because the sellers of these gold futures contracts had only one motive, and that was to bomb the gold futures price and trigger stops and further selling by other contract holders, simultaneously torpedoing the international spot price and achieving the desired effect of negative gold headlines around the world, but above all else attempting to disarm the gold price as the barometer of inflation expectations, and strangle the gold price as the ‘canary in the coal mine’. 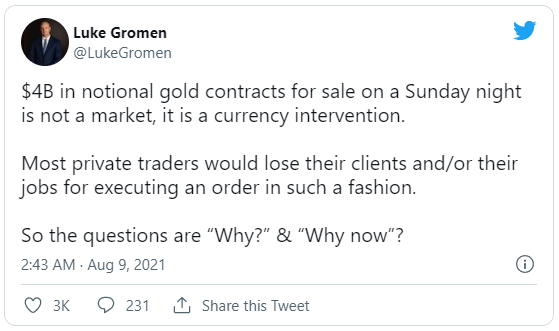 When trading on the CME platform opened at 6:00 pm on Sunday evening New York time, all was relatively quiet for the first 45 minutes, with contract volumes traded per minute mainly in the 50 – 200 contract range, and a contract trading average of 1965 contracts per 15 minute period between 6:00 pm and 6:44 pm. 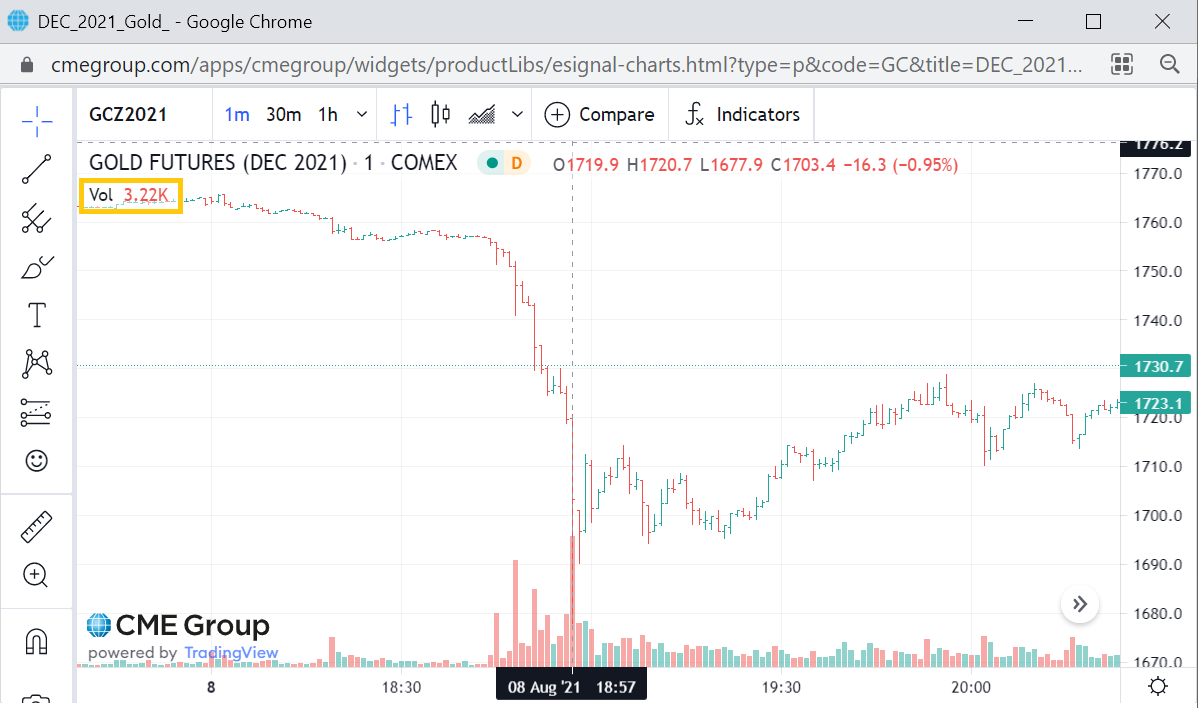 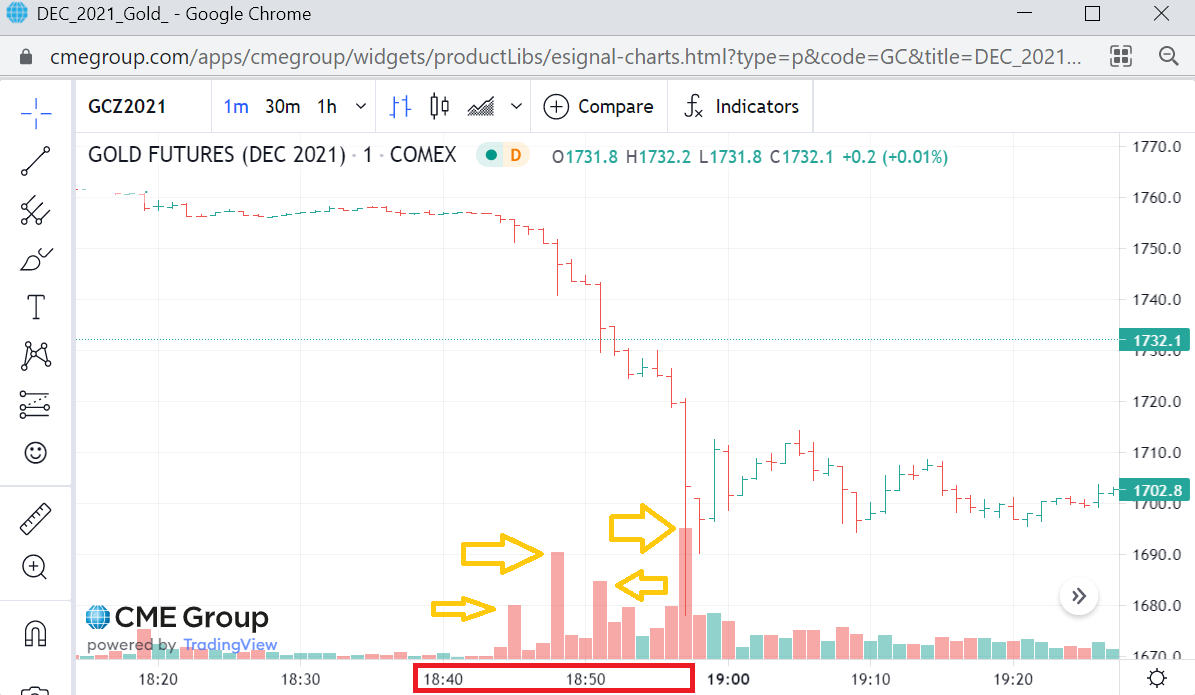 Who dumps 54 tonnes of gold equivalent worth over $3 billion on a Sunday evening when New York, London and Singapore markets are all closed? 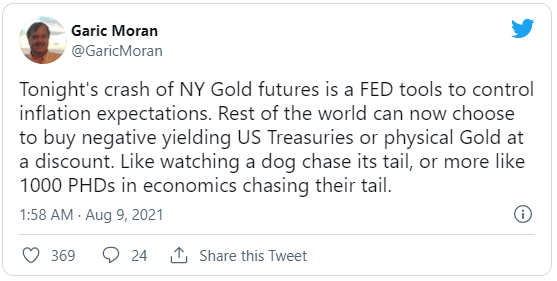 From 18:45 to 18:57, the COMEX December gold futures price fell from $1755.8 to $1677.9, a 4.4% drop. All because someone or a group of traders entered massive orders to go short the COMEX gold futures when the largest two centres of COMEX gold trading (New York and London) were not even open and when Singapore and Tokyo had national holidays.

Where is the CFTC?

Who instigated these trades? Bullion banks for their own books? Bullion banks as agents of the US Federal Reserve or another central bank? The Bank of International Settlements (BIS) gold trading desk in Hong Kong?

Where is the regulator of the COMEX to investigate these trades, namely the Commodity Futures Trading Commission (CFTC), and its acting chairman Rostin Behnam?

A non-corrupted and independent regulator would investigate who put in the orders and what damage it caused by triggering stop loss orders of other participants all through the price crash and beyond. Note that volume remained elevated in the next 15 minute period between 7:00pm and 7:14pm during which another 7898 contracts traded. That’s 25,732 contracts traded over half an hour period from 6:45pm through to 7:14pm, worth US$ 4.45 billion notional at $1755 per oz.

The price manipulation was not limited to COMEX gold futures, as the same shorting spike happened at the same time in the COMEX silver market. There, the silver price on the front month SIU1 September 5000 oz silver futures contract fell from $24.17 per oz at 18:45 to a low of $22.295 at 18:57, with the volume spikes occurring in the exact same minutes as in gold. That was a $1.875 price fall in silver over 12 minutes, or a drop of 7.76%. 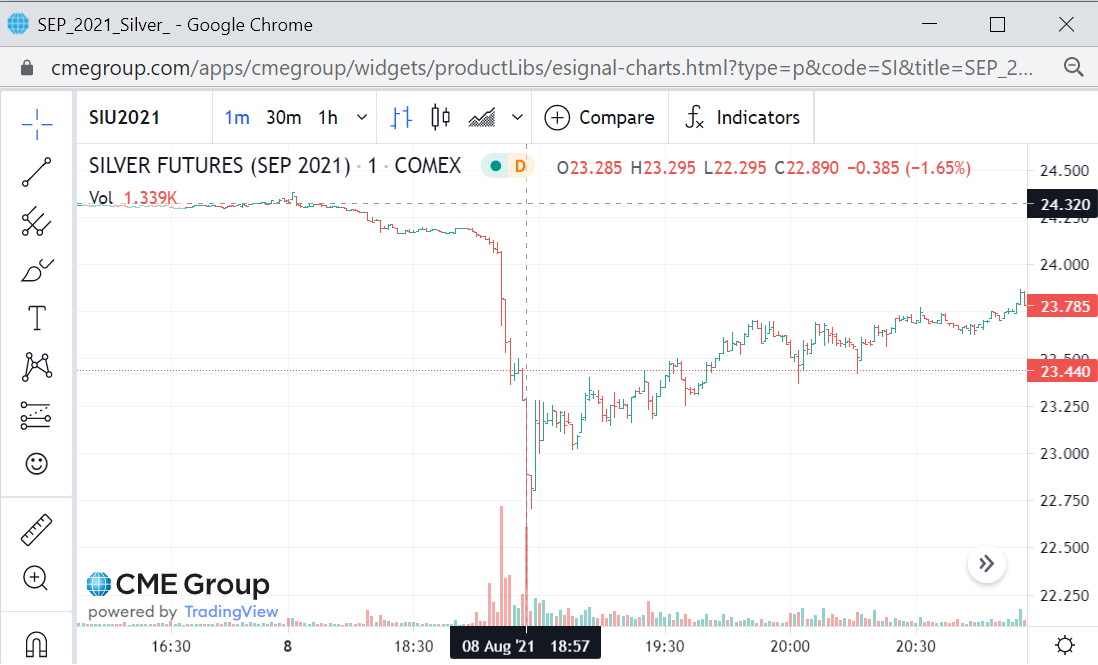 The simultaneous attacks on both gold and silver did not stop the banker apologist outfit, the World (Paper) Gold Council, rolling out the old comedy line that the gold price crash could have been a ‘fat finger’, nor trying to pin the price fall to a non-existent move in the US dollar index at that time. 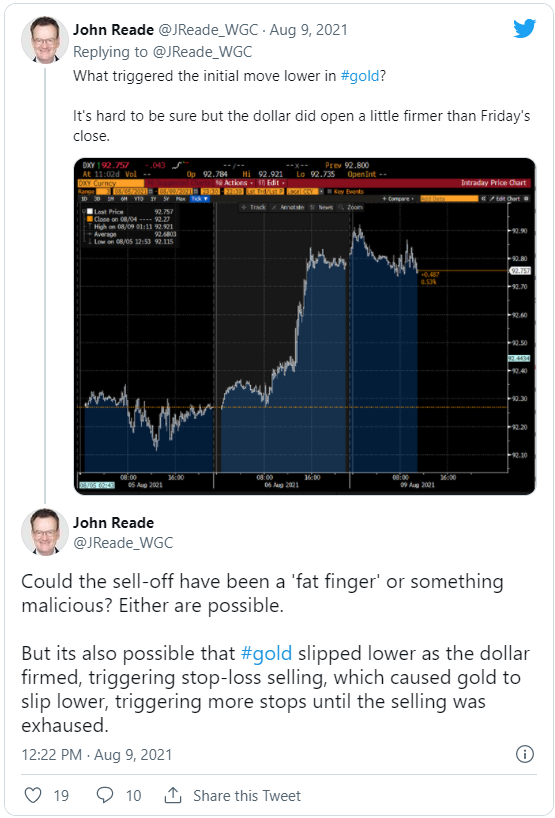 Following this orchestrated price attack on gold, over the next 2 hours after 7:15pm the COMEX gold price recovered somewhat and was trading at $1740 by 9:30pm, then predictably moved lower to $1730 as London and then New York bullion bank trading desks came on stream.

But the damage was done, and mission achieved for those who banged and bashed the prices down – a lower gold price, higher profits to some trading desks, a damage to investor sentiment, and the mainstream financial media mouthpieces churning out headlines around the world that the gold price had been hit.

And the Bloomberg article by Eddie Spence “Flash Crash Shows Why It’s Tough to Be Bullish on Gold Right Now”, a piece that also rolls out the Fed taper narrative while failing to investigate anything nor explaining that what happens in COMEX paper gold trading with its detached “price discovery” has nothing to do with the physical gold market.

So it’s worth explaining here in brief. The international gold price that you see on your screen is derived from paper gold trading in both the London OTC spot market and the COMEX gold futures markets, where vast quantities of unallocated gold (synthetic gold credit) and gold derivatives are traded with little or no connection to physical gold markets. These markets are dominated by the LBMA bullion banks, and it is their trading that ‘establishes’ the gold price. These paper gold markets are the ‘price makers’.

Physical gold markets inherit the gold price from the paper markets, and are the ‘price takers’.  For an explanation of this see the BullionStar article “What sets the Gold Price – Is it the Paper Market or Physical Market?”.

Paper gold markets create supply of gold credit and derivatives out of thin air. This both channels demand into paper gold that would have otherwise flowed into physical, and also gives the financial establishment (central banks and their bullion bank agents) the ability to move the gold price using tactics like we saw with the massive volumes of COMEX gold futures short trades on Sunday night New York time, 8 August 2021.

The gold price takedown on Sunday night New York time had nothing to do with the physical gold market. It was merely price manipulation by powerful interests completely detached from reality. 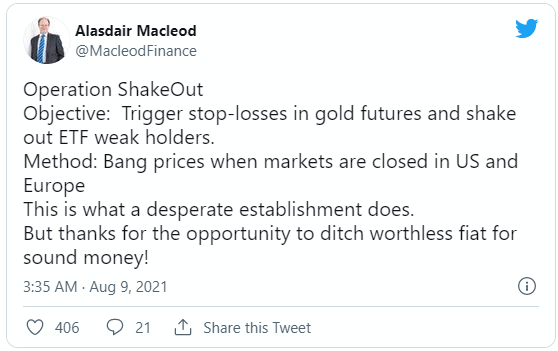 However, on the ground in the physical investment gold markets, there is extreme buying of physical gold. Take for example BullionStar’s precious metals order flow over a 5-day period from Friday 5 August to Tuesday 10 August, where buy orders have outweighed sell orders nearly 10.5 to 1, with only 8.6% of orders being sell orders.

And the paper gold and silver markets on COMEX and in London are in no way reflecting this. Why, because the paper markets are detached from reality and manipulated by the financial powers, with bullion banks dumping paper contracts in thinly traded hours on no macro news so as to pummel the price and make a mockery of what is happening on the ground in the physical investment precious metals markets. Physical demand is on fire but it is not reflected in the gold price, a gold price which is created on trading desks in Wall Street and London.

And why is demand for physical precious metals so strong? Over the short term such as the price falls since Friday, some of this physical demand is obviously due to lower prices, as investors and savers in gold and silver, especially in Asia, like to buy on lower prices.

Foremost among the emerging and unappreciated risks are societal destabilization and geo-political conflict that have been stoked by the coordinated and tyrannical moves being made by governments around the world to take away individual freedoms and freedom of movement, by coercion and discrimination, and under the guise of vaccine IDs, medical apartheid, and lockdowns.

This is causing huge upheavals in western ‘democracies’, while dividing societies, as attempts by governments to create two tier societies are rammed in. Take for example the massive protests and strikes happening right now across France, Italy and elsewhere in Europe. 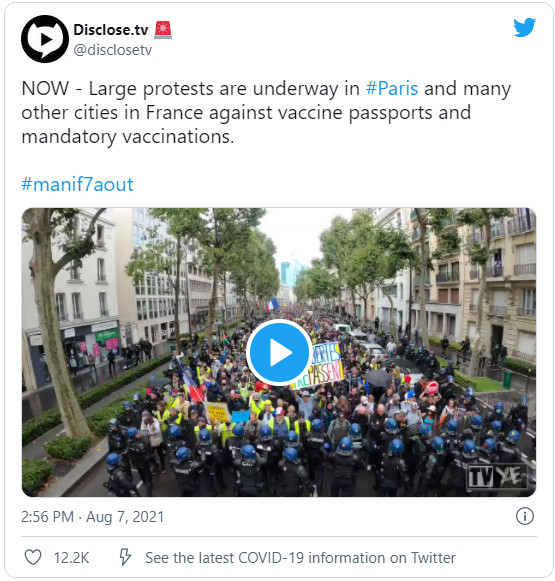 If you want to learn how gold and liberty are inextricably linked, please read Gold and Liberty by Richard M Salsman, published by the American Institute for Economic Research (AIER).