Gold Seeker Issue #45 ~ This Week in Mining: A Bad Start to the Year; Fundamentals Better Than Ever

Precious Metals started the week off strong only to see a sell-off in the back half of the week. Nominal rates moved higher, and gold traded as it often does, inversely with real yields (at least using the C.P.I). Even so, the sell-off is a bit odd given the Democrats won Georgia, giving them the presidency and both chambers of congress. This will all lead to much bigger spending, more stimulus, more government hand-outs, etc.

There were some good buying opportunities on the bright side on Friday as the mining stocks were hit hard. The Federal Reserve has made it known it will keep a lid on nominal interest rates through yield curve control. I venture to guess that the $80B/month of treasuries (and $40B/month of MBS) will move down the yield curve so that the FED started buying more of the 10yr treasuries, etc. Sign up for our free email list @ GoldSeeker.com.

Agnico-Eagle Mines: Announced they have agreed to acquire TMAC Resources at C$2.20/share, a C$0.45/share premium relative to the offer price of C$1.75/share offered by Shandong (although there were some on-going regulatory issues regarding the acquisition). Personally, I'm not too fond of this deal because it is an all-cash offer, and the assets are rather marginal or have been thus-far. Agnico likely didn't need to increase the premium vs. Shandong nearly as much as it did. The cost of the deal is higher than it looks as TMAC has approx. $80m +/- in net debt. While Agnico has significant infrastructure and experience in Nunavut, and this isn't an overly bad deal, I think there were better and bigger targets that could have created shareholder value. 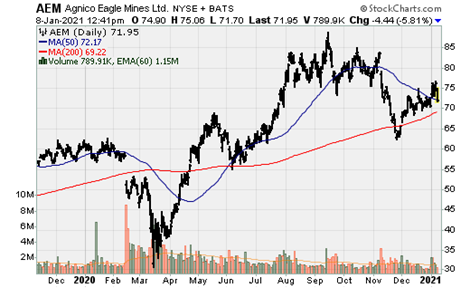 America’s Gold and Silver: The recapitalization project at Galena is going very well, with Q4 2020 production of 295k oz. Ag. Production will see a large increase beginning in 2022 to 1.8-2.0m oz. Ag by replacing the Galena hoist and increasing development of the 3700 and 4300 levels in 2021. The increased production is based on the Phase I drill program's continued success, notably the 4300-level targeting the upper extension of the 360 complex and recent drilling from the 3400 level. Highlights include:

At Relief Canyon, commercial production is expected to be achieved within the next two weeks, a delay from Q4 2020 due to certain key personnel for the project being unable to remain on-site due to contracting CV-19 and winter weather impacts. The next two years will be transformational for the company as it will see material gold production in 2021 and silver production in 2022. 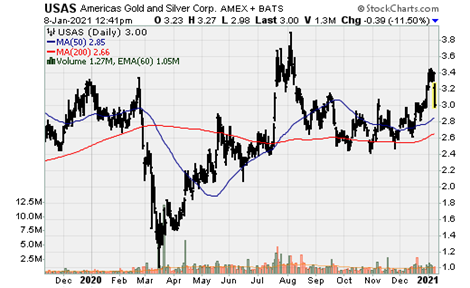 Aquila Resources: This Michigan focused mining company received bad news regarding permitting for its advanced stage Back Forty project in Michigan. It is getting increasingly difficult to permit a project in the U.S., outside of Nevada and certain areas of other states [Idaho, Alaska, Arizona]. The environmental crazies have more influence on permitting; things are likely to become more difficult. It is important not to leave a huge footprint; however, there have been several projects over recent years that have received all the necessary permits only to have them revoked for no reason [Hudbay's Rosemont Copper project in Arizona].

Regarding Aquila, the Michigan Office of Administrative and Rules issued a decision denying the prior issuance of a wetland/stream/floodplain permit for Back Forty. This permit was already granted, and to revoke the permit on no basis is typical bureaucratic BS. The so-called rationale for this action was that petitioners earlier filed an administrative contested case challenge to the issuance of the Wetlands permit by the Michigan Department of Environment, Great Lakes, and Energy [EGLE]. EGLE issued the Wetlands permit on June 4th, 2018, following years of environmental baseline work and a thorough review process. The judge convened an evidentiary hearing in June 2019, which ended in January 2020. In his January 4th, 2021 decision, the judge determined that Aquila's groundwater model didn't provide reliable identification of wetland impacts and determined the permit application was "incomplete."

The judge also determined that Aquila didn’t provide a complete assessment of potential alternatives to its proposed plan. The company disagrees with the decision, which is based in significant part on what the company believes is a misunderstanding of the information concerning the potential for indirect wetlands impacts associated with the project. The decision establishes a permitting approach that markedly departs from wetland permits issued for other mining projects in the Great Lakes region. Aquila worked for several years with EGLE staff during the permitting process to address the complex technical issues associated with estimating potential indirect wetland impacts, landing on an approach that complied with federal U.S. Army Corps guidelines estimating and permitting such impacts for mining projects. Bureaucrats shouldn't be part of the permitting process, but that doesn't look like that will ever be the case. 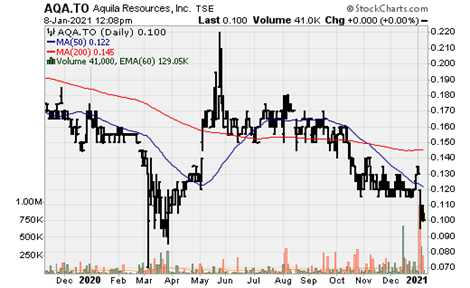 Endeavour Silver: The company reported its highest quarterly production in the last two years from its three-producing mine in Guanacevi, Bolanitos, and El Compas. Q4 production was 1.117k oz. Ag and 12.57k oz. Au. For the full year 2020, silver production totaled 3.51k oz. and gold production of 37k oz. Hopefully, the company can commence construction at Terronera by year-end or early 2021. 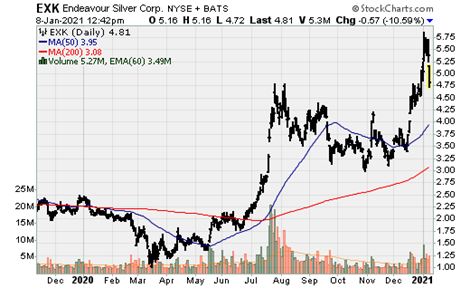 GR Silver Mining: The company reported wide and high-grade zones from New Underground Drilling in Plomosas. Highlights in this press release include 83m @ 420 AgEq g/t including; 11m @ 1,596 AgEq g/t and 4m @ 1,319 AgEq g/t. The project was acquired from First Majestic, and it is looking like this could be a big-step by $AG; only time will tell. 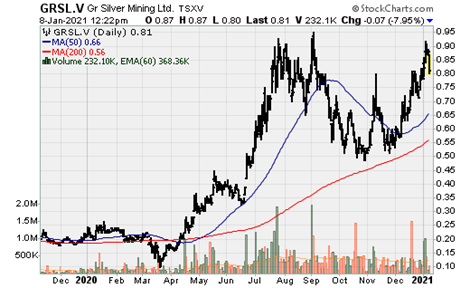 McEwen Mining: Updated Gold Bar reserve and resource estimate. 2P reserves are 302k oz. Au and an additional 197k oz. Au in the Indicated category. The updated NPV8% @ $1,500/oz. Au is estimated at $62-$76m, increasing to $150-$170m @ $1,900/oz. Au. An Updated feasibility study (FS) will be published within 45 days. The company also reported Q4 and full-year 2020 production results. Full-year production totaled 92k oz. Au and 2m oz. Ag, with Q4 output of 24.1k oz. Au and 532k oz. Ag. $MUX has been a significant underperformer providing no leverage to precious metals prices. The company really needs to get costs under control in 2021 for this stock to be investable as it hasn't been really since inception. 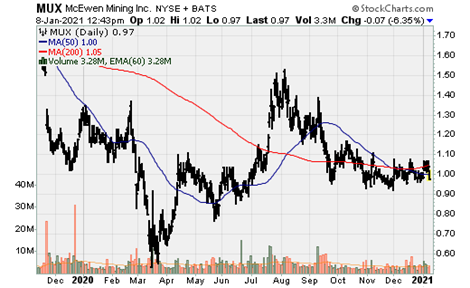 New Found Gold: On the back of some excellent drill results, the company increased its drill program to 200k meters at Queensway and increased drill rigs at Queensway to 8 from 4. Only 13.4k meters of its initial 100k meter drill program has been completed as of December. The company increased its budget to $35m to fund its exploration initiatives, which is covered by $67m in working capital, so near-term dilution is unlikely unless the company's stock price rises to a level where it doesn't make sense not to raise capital for future drilling. More drill results will be released as there is a significant backlog from 2020 drilling at the assay lab. Additional drill results should be released next week. 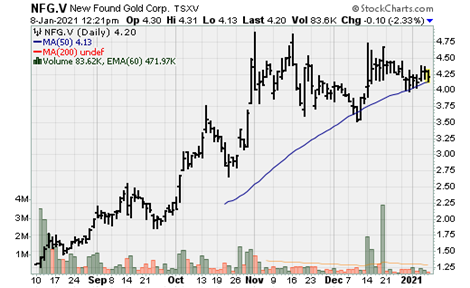 Osisko Mining: Osisko continues to report excellent infill drill results at its flagship asset, Windfall, which is one of the most exciting advanced stage development projects in Canada. While the PEA indicated average annual production of approx. 200-220k oz. Au, this will likely be closer to a 275-300k oz. Au producer when a feasibility study is reported. Drilling is currently focused on the Lynx deposit, with the near-term objective of completing the infill program in preparation for feasibility work. The principal mineralized zones remain open down plunge, and near deposit exploration continues to give encouraging results. The drill highlights in this press release include: 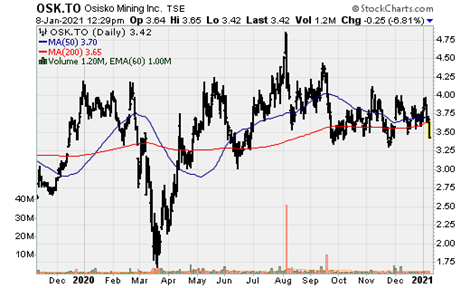 Silvercrest Metals: As the company prepares to commence construction in Feb 2021, the company announced it has secured a $120m projecting financing facility (debt) and a fixed $76.5m fixed price EPC contract for the construction of the 1,250tpd process plant. It is a bit odd that secured such a large financing package given its cash position [estimated at $135m at year-end 2020] the capital costs in the PEA (it will be higher because the plant will likely be larger or a near-term expansion to follow commercial production). However, it is better to have more than enough available capital as opposed to too little. A relatively short build-out period at the process plant's commissioning is targeted for Q2 2022, and production is slated to ramp-up beginning in Q3 2022.

Although this could also mean the plant size is larger than expected. The FS will be released in late January 2021, followed by a construction decision. 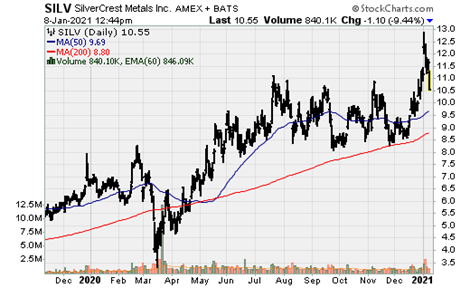 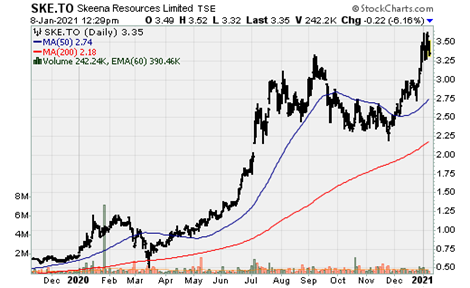 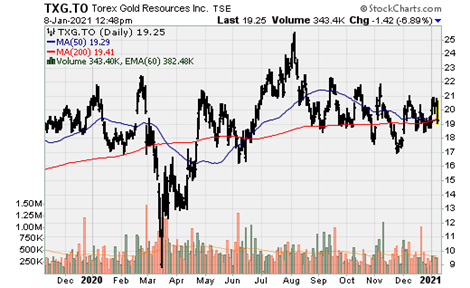 Victoria Gold: The company reported disappointing earnings in its first full quarter after achieving commercial production, at least on the cost side with AISC above $1,300/oz vs. FS levels of sub-$800/oz. Q4 earnings should be better, but we will have to wait and see. Production increased 20% quarter over quarter to 42k oz. Au. The strip ratio fell to 1.4 in Q4 vs. 2.1 in Q3, which is important given the operation's low-grade nature, although grades fell slightly to 0.81 g/t Au (which is still higher than the reserve grade). If AISC isn't hasn't dropped to at least $1,050/oz (from $1,300/oz. + in Q3), it is doubtful the company will ever achieve feasibility study costs. Even if that is the case, mining the Raven zone in the future could push costs down (assuming a low strip ratio) as grades are higher. 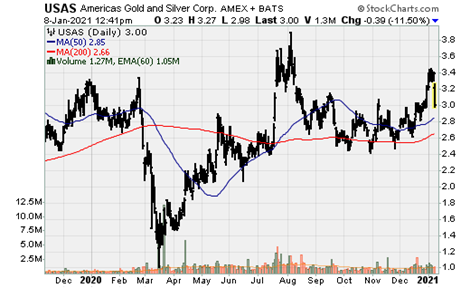